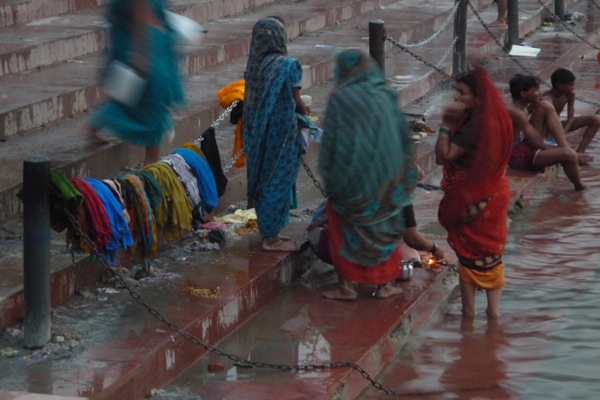 A Glimpse Correspondent in India questions travelers’ quests for authenticity.

I came to Rishikesh to relax, to write, to bathe in the Ganga, to be left alone. It’s exactly as easy as I remember it being when I first came five years ago–the heart of the “banana pancake trail.”

Rishikesh is listed on the back cover of Lonely Planet as the yoga capital of the world. Unsurprisingly, there are foreigners everywhere, and Ayurvedic apothecaries, massage centers, Nutella, Sai Baba-branded incense, chillums.

Didi’s East-West Café and Little Buddha Restaurant offer avocado lassis, cinnamon rolls, homemade kombucha. Eggs, toast, and weak Turkish coffee are available together in a set as ‘Israeli breakfast number two.’ These things are, I think, meant to seem familiar and comforting to foreigners; but it’s hard to pinpoint exactly where they’re native to. Tourists who met and talked philosophy over lukewarm beer in other cities run into each other here again.

Every day I indulge myself in an Americano in air-conditioned Café Coffee Day. There are big windows in the front that look out across the street at the local jeep stand. People stare in at the mostly foreign customers, sipping our expensive coffees and magenta-colored frozen mocktails.

I imagine we look comfortable, entitled, ignoring the world outside of our glassed-in interior. I have an odd sense of guilt at being here. It’s almost too easy. I get caught in this trap of equating struggle with valor, with worth. As though by choosing to stay here I’ve temporarily checked out of India.

I keep thinking about a question someone asked me when I was here three months ago for the Kumbh. Ben, a Canadian tourist who’d also gone to Haridwar for the big bathing day, had heard that my friend Neel was fluent in Hindi and quite knowledgeable about Hinduism and North Indian culture. Ben wanted to know what was “more authentic” about my experience of the Kumbh because I was with Neel. The question startled me; I had no idea what to say. But how fitting, to ask such a thing here. 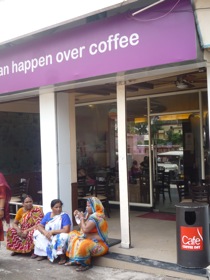 A silk merchant in Banaras once told me about attending a family wedding in Mumbai. It was a lavish, modern affair; the tikkas, normally made from sandalwood powder, were made instead of the dust of pearls. Out of all the male guests, the silk merchant was the only one in kurta pajama; the rest wore three-piece suits. Everyone wanted to talk to him, listen to his stories told through paan¬-stained teeth.

They were delighted: here, in Mumbai, a pakka Banarasi! Indians, too, cling to a vision of the real.

What and where is this pure, pious embodiment of Indianness that we are searching for? If it exists, so must its opposite. Before I came, an acquaintance sent me an email suggesting some possible destinations. He mentioned Pune, but warned in capital letters: “It’s NOT INDIA.”

Yes, India is changing. But if Rishikesh, Pune, and the pinstriped Mumbai businessmen aren’t Indian, what are they? Are we willing to relegate them to being as countryless as the banana pancake? The truth is, one of the things that defines India for me is how fluidly, how comfortably seeming contradictions coexist here–in her landscapes, her experiences, her people–until they no longer appear antithetical.

Here in Rishikesh, I read the Hindustan Times over my Americano. Today’s cover shows a girl in profile sitting on a raised platform. Her eye makeup is heavy and she’s wearing mounds of red silk and a garland of marigolds around her neck. The caption explains: She is a fifteen year old living goddess, revered as an incarnation of Kali. Before her kneels another girl wearing jeans and a t-shirt. The goddess is blessing her. Both girls have just passed the high school leaving certificate exam; the goddess is the first sitting deity to ever do so. Her success in the exam “[has set] her on course for a career in banking” after she retires when she reaches puberty.

Every day I go to the beginner’s yoga class at the ashram where I’m staying. One night I get drunk with my teacher, Praveen, and he tells me it’s only an ashram in name. He refers to the owner as “fatty man.” Sometimes no one else shows up for class. When it’s just the two of us, he doesn’t touch the threshold of the room and then put his hand to his chest when he enters. He doesn’t ask me to finish the session with Om chanting like usual. I could feel disillusioned when another batch of students appears the next day and again he has us sing shanti shanti shanti, but I don’t.

Seven years ago Praveen left the business world, or, if you prefer, renounced it. He lived in the forest with his guru, practicing eight hours a day, eating enough to satisfy only three quarters of his hunger. He missed his motorcycle, his cell phone. His friends and his parents distanced themselves.

When he was young, they took him to hear famous babas lecture on the right path, the holy way. Now they want to know how he’s going to make money, if he’s serious when he says he won’t get married. These days he eats finger chips and oils his hair, and he has another scooter–its model name is ‘Pleasure.’ He likes telling stories about the discotheques he went to back when he was “commercial.” I’m still getting more flexible every day.

I spend another comfortable night at my fake ashram, the banker becomes a yogi, the goddess becomes a banker. Today she doles out blessings; tomorrow, pin codes and deposit receipts.

Should I be disappointed? She shares the HT cover with a story on a new three billion dollar international airport terminal and another about the recent slew of so-called “honor killings” in metropolitan Delhi. Authenticity doesn’t sound so pretty now. But it sure is shocking, it sure is different.

In the morning, I start thinking about going back to Banaras. But I won’t make any decisions before I’ve had my Americano.