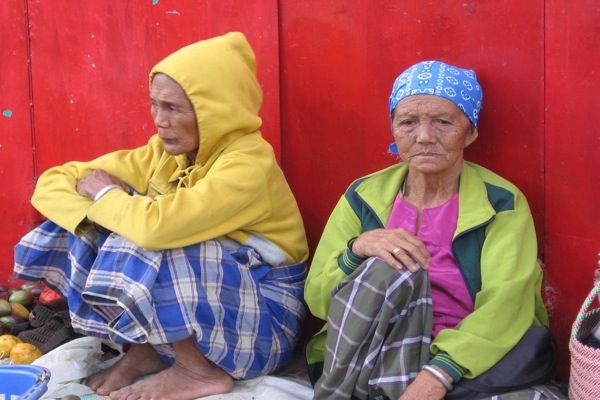 An American gets in over her head searching for challenge and adventure, and comes to understand something quite different from what she set out to learn.

“Is it a man of a war?” I asked my boyfriend. In an instant, the scalding burn of the sting had progressed into an ache, shooting its way to my groin from the blisters it had left on my ankle.

He scanned the images of jellyfish in the health guide we had brought on our backpacking trip through Ujung Kulon, a remote and untouched swath of rain forest on the western-most tip of Java. A Portuguese Man of War is no Box Jellyfish, I knew, but I recalled that it could send victims into shock and cardiac arrest. The pain was unbearable.

“Is it?” I said again. It was becoming difficult to breathe.

“No,” he looked up, shifting his eyes towards our silent guide who was preparing dinner behind me. There was a kind of tough sorrow in his face. I knew, instinctively, that he was lying; but I also knew that, if only to calm myself, I should try to believe him. 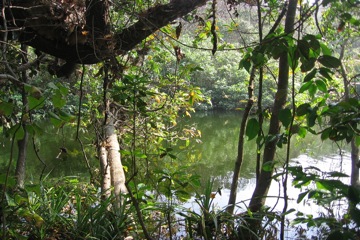 I stared blankly out at the ocean, watching the waves crash against the rocks that surrounded the cove where we had set up camp. Ujung Kulon had a perilous beauty about it, the cliff faces steep, the open clearings between dense forest flat and eerily lifeless like the moon. Since I’d first entered the wilderness, I had been on edge.

But now, lying on the sand in the worst pain I had ever felt, I was terrified. Guides didn’t carry radios in Indonesia. And even if they did, where could one get us? The tiny, dusty village of Tamanjaya at the entry point of the forest didn’t even have a fruit stand, let alone a hospital.

This national park saw few visitors because of it’s location – starting from Jakarta, we had spent eight hours on two different sweltering buses rides, two hours on a motorbike down a deeply-rutted road, and three hours on a boat out to the island of Panaitan where we finally began our hike.

In coming to Indonesia, I had been looking for that thrill of raw experience that only traveling can give you. But here was a sensation I hadn’t quite bargained for: I felt like I was on the edge of the world. 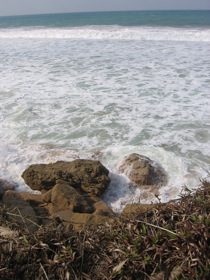 We “need sometimes,” the philosopher George Santayana wrote, “to escape into open solitudes, into aimlessness, into the moral holiday of running some pure hazard, in order to sharpen the edge of life, to taste hardship, and to be compelled to work desperately for a moment no matter what.” The notion of travel as work may be surprising, but that “moral holiday” is exactly what most intrepid travelers are searching for.

I began my trip through Indonesia with a backpacking trek curious to explore the rain forest, but even more eager to discover the resources dormant within me. I wanted to test myself—to reveal how I’d hold up under the humidity, how my Bahasa would fair with our guide, how well I could maintain 15 mile days on ramen and eggs alone. I wanted to sharpen the parts of myself that had grown dull in the tedium of daily life. I wanted to work.

I took on these endeavors aware of the possible dangers – the chance of rousing a sleeping panther, of crossing paths with a crocodile while wading through a stream. But it is only when we are faced with these actualities that we realize how dim that awareness really is. Only then do we know what it’s like to sense our own smallness in an unfathomable universe, to scan our failures and regrets, to suddenly glimpse both our life and our death.

The Luxury of Recklessness

I spent that evening in the rain forest in panic and pain, listening to the waves crash outside of our tent. But I knew by dawn, as the aching grew quieter, that I was going to be all right.

The order of society – no matter if it is the layout of New York City’s grid or the perfect rows of rice paddies where the wilds of rain forest once stood – provides us with predictable comfort, insulation from the ruthless and indiscriminate movements of nature. I returned to seething Jakarta with a sense of relief, consoled by the traffic, the bartering in the garbage-strewn streets, the call to prayer that sounded reliably throughout the day.

Yet it was really my travels through Indonesia’s cities and villages in the months after that marked me with an unshakable sense of life’s fragility. Weeks later, in a small, ocean side village of north Sulawesi, I paid a fisherman to take me out snorkeling. The water was incredibly clear, and he pointed out from his boat the fish and sea urchins that were poisonous. I passed him my mask at one point, and he laughed, shaking his head. 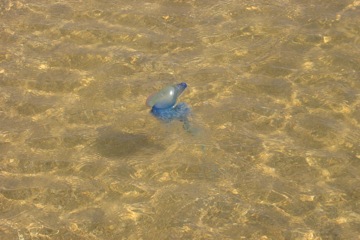 “We are not brave like Americans,” he said, pausing for a moment. “Or crazy.”

It was a luxury, I realized. A luxury to be both admirable and insane.

The “Adventure” of Daily Existence

It is one thing to force hardship upon yourself; it is another to witness the daily, impossible struggle against it. For the next three months, I kept moving: by crowded train in Java, by speedboat through choppy water, in dodgy aircraft where women prayed not just at the beginning of the flight, or the end, but throughout.

On the switchbacks of bus rides, the faces of rickety homes flew by— they had been built precariously on mountainsides, where the shorn land lay vulnerable to mud slides. Leaving Jakarta, the train gave way to endless stretches of shantytowns, heaps of trash baring the evidence of past floods.

All over Java refugees from mudslides, floods, and earthquakes—the constant stuff of life in Indonesia— cling to temporary shelters, waiting for government aid. Hardship, both man-made and nature-driven, is impossible to ignore.

Locals I met throughout Indonesia echoed the fisherman’s confession of timidity: “We do not have adventure like you,” they’d say. And yet, in their daily lives, they were a people unfazed. Children begging in the streets of Jakarta weaved casually through chaotic traffic, vans and motorbikes ungoverned by any real rules of the road. Pedestrians walked indifferently across the paths of speeding cars, in tune with some kind of unspoken choreography.

Baffled, I hung back on street corners, waiting for a moment to jet across. Most Indonesians possessed a balance and grace I could only dream of. I imagined that, for all of their reservations, the locals would fare much better in the rain forest than I had. But why test yourself when the daily trial of existence is enough?

The Balinese and Torajans are famous for their elaborate funerals, drawing visitors from around the world each year. But around the archipelago, much quieter ceremonies of mourning in the Muslim and Christian tradition are an everyday routine. And as access to health care is scarce for many, the cause of death is often unknown.

In a rural village in Halmahera I visited, a child died of a fever he had been struggling against for several days. Such news travels at lightening speed among villagers, and it came to the yard of a home where I was sharing a meal with a local family that same evening. The teenage girl standing in the doorway of their little home looked out with pleading eyes and asked:

She was looking not at the messenger but at me. I couldn’t answer the question anymore than the other people there. It was a fever; who or what brought that fever I didn’t know. Silence filled the muddy compound where we sat scattered in plastic chairs. The world looked hazy in dusk’s failing light.

“God took him,” a man next to me said. The rest of the group nodded.

Medicine might have other explanations, scientific answers may provide us with the comfort of understanding, but in the end, the question is enduringly, painfully the same: Why did he die? Because she was asking not what had caused the fever, but what we all ask in the face of death: why does it happen with such blatant indifference, such injustice, such frequency? How can life be so tenuous?

I looked around at the family surrounding me. The matriarch wore the same expression that I had seen on many faces throughout my travels in Indonesia– on women heading to family funerals, on men leaving the mosque, in my boyfriend’s face that evening in the rain forest. It was an unlikely mix of defiance and sorrow, a look of prayer in their eyes.

Tagged
Culture Indonesia
What did you think of this story?
Meh
Good
Awesome