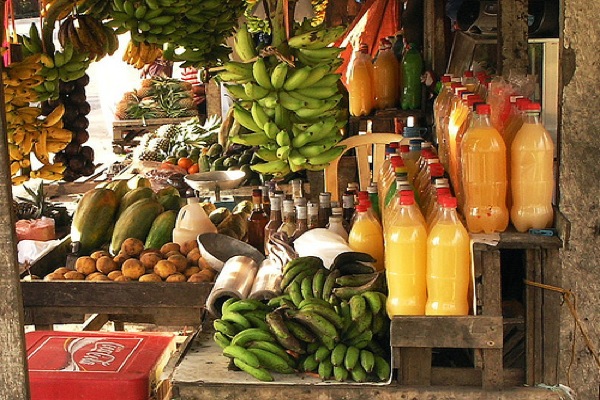 The Philippines might be on to something with bring your own food (BYOF) restaurants.

THE TWIN ENGINE PLANE that hurtled us over the Philippine jungle had tendencies for splendid, gut-wrenching drops. My eyes were glazed, staring out the window to a thousand and one clouds. My wife, Takayo, was trying to sleep through it. Her eyes were closed, but gripping the armrest like she was, I don’t think she was having much luck. We had an eight-hour layover in Manila before our flight back to Shanghai.

Aside from being overcrowded, noisy, and hotter than Hell’s doorknob, there’s nothing wrong with the Ninoy Aquino Airport, if you have twenty minutes to kill between flights, you can pick up a liter of rum for about two dollars, or talk scuba diving with someone over a San Miguel. For longer layovers, however, you’re better off napping through it in the backseat of an air conditioned taxi. Naturally, the air conditioner in our taxi was busted, so I asked the driver if he knew of a good restaurant in the area.

“I know a place,” he said, and then stepped on the gas.

Adobo is the Philippine national dish, made using vinegar, soy sauce, and other ingredients indigenous to the area. The vinegar has a tendency to boil away, leaving a thickened broth and meat that falls off the bone. Our hotel in Boracay had served a chicken adobo for breakfast one morning. My wife and I were now hooked. 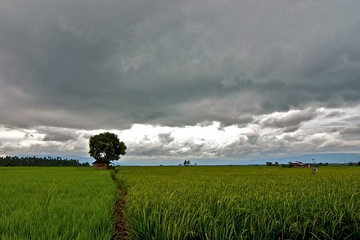 It was a clear day on the outskirts of Manila. Some have called Manila an unkempt, rundown, impoverished, and threatening sprawl of a city. I wasn’t buying it. As with anywhere in the world, the experience depends on the pair of eyes you’re looking through. My eyes, as it turned out, were hungry; I saw a future of culinary opportunities.

Our driver turned off a highway and headed down an alley lined with fruit stands, fry joints, and beer halls. We arrived at a closed cul-de-sac and parked, the only car on the street. The driver told us he’d stay in the car, but we told him he could go and walked up to the restaurant. It looked utterly abandoned, but the front door swung right open.

A girl came out from the back and gave us a sleepy welcome. She told us to pick any seat we liked. We flipped through the menu, which, of course, was in Tagalog. Our waitress arrived and we began pointing to items on the menu. She wrote everything down.

“We don’t have any food. We came here to buy food from you.”

Wasn’t this the beginning of an Abbot and Costello routine?

“Market’s through the alley.” 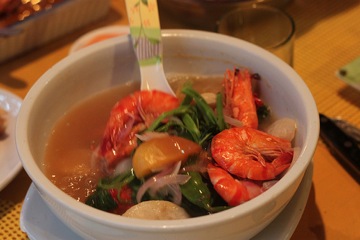 I asked the girl to accompany me to the market. Takayo stayed at the restaurant watching a Philippine soap opera on the wall-mounted television. I followed the waitress through a cinder block corridor to the side of the restaurant. We passed a mountain of trash. We passed a boy sleeping on a wooden pallet at the mouth of a dark hallway. The earthy smell of roots and raw meat become stronger, and then we entered the warehouse market.

What was once a fly-swarmed place full of bored fishmongers became a fly-swarmed place full of excited people bidding for my attention. Handfuls of crab and shrimp were thrust at me from every angle. Eyes bugged out from sea creatures. A little girl asked me for spare change and I placed some in her hand. Everyone went wild. By the time we finished shopping, I carried out a kilo of prawns, a half-kilo of pork, green beans, broccoli, onions, garlic, rice, and more. I waved good-by to the vendors, who returned a tremendous farewell. The waitress kept walking and I had to jog to catch up with her.

It was nearly an hour before the food landed on our table, but it was worth the wait. Philippine cuisine has elements of Southeast Asian, Chinese, and Spanish influence rolled into one. There were Adobo prawns, pork apretada, stir fried vegetables, coconut rice…it was the type of spread you’d be happy to call a last meal. And who knew, it very well could have been. We still had to walk out of that alley to catch a taxi, but that would be hours later. We gave it our best, trying to finish everything on the plates.

A restaurant with no food. It may not be practical for everyone, but it’s a change of pace for those of us who like to know what we’re eating. And there in that little alley somewhere outside of Manila, it was the best possible way to spend a long layover, eating fresh food we’d bought ourselves cooked with local expertise.

Tagged
Culture Philippines
What did you think of this story?
Meh
Good
Awesome

This Manhattan museum is telling the history of enslaved people on the island
The world’s 5 most beautiful alphabets you’ll never learn to read
30 awesome Japanese idioms we should start using in English
Rajasthan’s epic camel festival is two days of fur-cutting, dancing, and races
7 small towns and cities that celebrate Mexico’s quieter side

Island-hopping around Palawan, Philippines, is the best adventure you can take in 2020