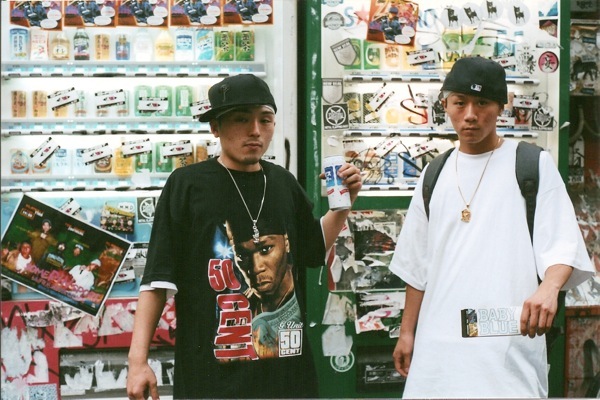 An expat moves to Japan and discovers a fascination with his own culture.

Whenever I meet someone who has been to Japan for any amount of time a superficial bond is instantly formed. The script begins: Where were you living? How long were you there? Were you teaching English? What company were you with? These conversations eventually turn into personal experiences about the struggles of daily life for a foreigner in Japan, and what it was like in the first few weeks after arriving (or surviving).

I moved from Montreal to Tokyo excited about discovering new food, learning a new language, and seeing old temples. All of which I did. But no one told me I would also find Caribbean themed restaurants, girls wearing bomber jackets with ‘respect the black woman’, or ‘black for life’ written on the back and guys hanging out in old Cadillacs they converted into low riders. In my naivete I wondered where the ancient land of the mysterious orient I had envisioned was. I was experiencing my very own version of culture shock.

To see aspects of my own culture in Japan was, to say the least, surprising. I didn’t quite know what to make of Jamaican food and music festivals, Japanese reggae artists or clubs named Harlem or Bootie which played the newest Hip hop and R and B music. Seeing this apparent fascination by some Japanese people with all things black, my mind went from wow to why? 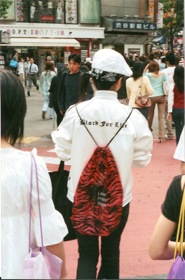 “Kokujin kakkoii!” is what I was often told whenever I asked what was behind the admiration of black people. Basically, I was cool, simply for being black. I admit it was a bit of an ego boost hearing it whispered behind me as I walked down the narrow yet crowded Takeshita –Dori in trendy Harajuku or while getting down on the dance floor till 5am in Shibuya. Sometimes people would come right up to me and say it. To which I would smile and say a simple thank you.

But soon I started to feel like a celebrity without all the perks. People didn’t know me, yet they thought they knew what I was about. I got tired of conversations that started with ‘Where are you from? New York?’ ‘Are you a DJ? ‘ ‘What sports team do you play for?’ I’m from Canada, and I came here to teach English. Sorry to disappoint you.

I was mistaken for both a band member from The Roots and Tiger Woods (who I look nothing like) and asked to sign an autograph by a high school girl while at Tokyo Disney. I was asked to pose for pictures while holding a newborn, and complimented by a group of small town teens on certain parts of my, ehrm, anatomy at a Tanabata festival. One guy even went out of his way to buy his train ticket at the counter next to me only so he could say ‘what’s up my brotha?’ then left with a satisfied grin. I guess I made his day.

Then there were the countless number of 20 somethings I saw wandering around, who payed 50, 000 yen (roughly 500 US dollars) at some chic salon to make it look like they had natural dread locks for a month or two. Or the guys dressed like they come from ‘the hood’ trying to have the speech to match. In reality there is no hood in Japan and their language is built around self effacing pleasantries and kindness instead of tactless blunt directness. 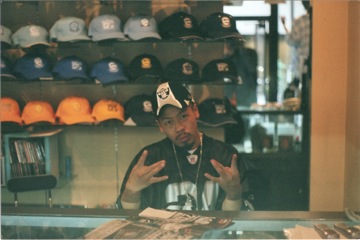 People often say that imitation is the biggest form of flattery. But is it really? Just what they were getting out of perming their hair to get an afro then sticking an afro pick in it? So much of it seemed disingenuous. For one thing, I knew today’s b-boys, popping and locking in the hallways of train stations (with extra effort as I walked by it always seemed), dancehall divas, and rent-a-dreads were tomorrow’s salarimen and OLs (salary men and office ladies, colloquial Japanese for corporate business men and secretaries). They would eventually grow up, conform and consider their former passions and pastimes as just kid stuff.

A black male colleague of mine who also lived in Japan offered another perspective. He found it refreshing to see a new take on music, fashion and food we both grew up with. I wasn’t so easily convinced. Playing with culture the way you play with the latest gadget could hardly be a positive thing, especially if you don’t know the culture well enough. There seemed to be no concern at all about whether their actions, dress, comments or hairstyle might cause offence.

Over time, I realized for Japanese youth, being into black culture is a form of rebellion, and therein lay the attraction. Young people like to be different in one way or another and stand out as individuals. Hard to do in a country where conformity is encouraged. Live the same, think the same, look the same, BE the same. To purposefully stand out is asking for trouble. As a well known Japanese proverb says: The nail that sticks out must be hammered down.

Maybe it’s just a form of admiration and shouldn’t be considered anything more. So much of hip hop culture today has now become youth culture it’s sometimes hard to distinguish between the two. But my colleague had a point. Japanese people put their own twist on things. Whatever subculture they adopt, they become masters, collectors and Aficionados.

You need look no further than Mighty Crown Sound Crew, who are internationally known and won multiple awards for their reggae remix and DJ skills. Not to mention Junko, a dancer who won the dancehall queen competition in Jamaica in 2002 and now teaches kids in Japan how to dance like her. I’ve met Japanese dudes that speak better Jamaican patois than even I could imitate and owners of soul R&B and hip hop vinyl collections that must have cost a small fortune.

Back in Canada now for a few years, I often find myself day dreaming about my time spent in Japan. Having lived in several areas of Saitama and Tokyo over three and a half years, pulled me out of my Canadian comfort zone and tested the limits of my Westerner patience. It challenged my way of thinking making me aware of the difference between group mentality and individual. Japan and Japanese people always kept me guessing. Just when I thought I had them all figured out, they threw me another cultural curve ball.

The presence of black culture in Japan still leaves me with ambivalent feelings. What is clear however, is despite the fact their own language and culture keep them apart there is a young generation of nihonjin who seek more than ever to be closer to the rest of the world, to feel somehow connected, and are still in the processes of figuring out how.