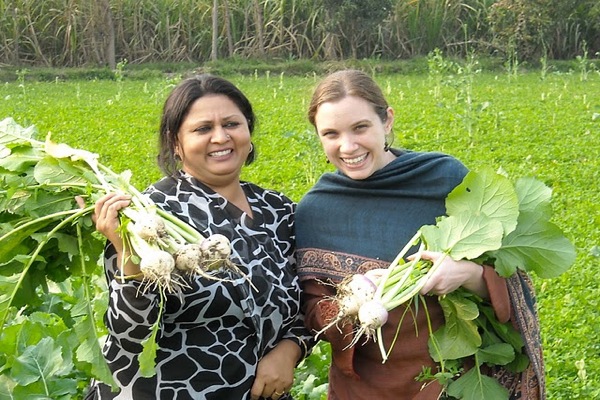 I watch Nasreen as she carefully measures out four entire cups of ghee. I feel like I’m breaking out just being in the kitchen with this concoction. Four cups of clarified butter, almost pure saturated fat, is being used for just one dish. The golden globs sizzle and crackle as she tosses in the cows’ feet.

“You know how I learned cooking?” asks Nasreen. “From my mother. Before marriage, I learned everything. How to make chapatis, biryani, kabobs, chicken, mutton…so many things! Before marriage I was so smart and slim, but now I am very healthy,” she boasts as she makes the wrestler pose that inevitably accompanies the word ‘healthy’ in Pakistani English.

Breaking the Hulk Hogan flex, she giggles heartily. “Now you…you are looking so weak. You must eat rice and meat today.”

I smile. We’ve had this conversation on a twice-weekly basis since I moved into the upstairs apartment six months ago. As today Nasreen is teaching me how to cook her style, I decide it’s best not to explain that my version of ‘healthy’ differs markedly from the prevailing concept in Lahore.

To many Pakistani women, the more you eat means the healthier you are, and my stomach simply fails to comply. To terminate an endless deluge of food I often joke, “Bas! Mera pet Pakistani nahin hai!” No more! My stomach is not Pakistani!

Pushing a wisp of black hair out of her eyes, Nasreen rummages through the cabinets and pulls out an array of spices. “First we need to make the salan, sauce, for the biryani,” she explains. Throughout South Asia there are dozens of different biryani recipes, but Pakistan’s staple variety consists of chicken, aromatic basmati rice, onions, tomatoes and a complex cocktail of spices. Nasreen’s biryani is better than any I’ve had at a restaurant in Pakistan or even across the border in India.

She hands me ten garlic cloves along with a stone mortar and pestle. I haven’t used a set since high school chemistry, and Nasreen finds my ineptness amusing. In my fridge upstairs I’ve got a jar of pre-crushed garlic paste.

For me, the need to cook disrupts my daily routine like the arrival of an unwanted and unexpected guest. Almost everything must be made from scratch in Lahore unless you’re willing to shell out for expensive imported items. The temperature outdoors can be over 120 degrees Fahrenheit, and there are often power cuts that incapacitate fans and air conditioners. In the middle of the night, I’ve woken up in a cold sweat, dreaming that I was hosting a dinner party.

I can’t remember ever hearing a Pakistani housewife grouching about how she has got to cook, but it’s something I grumble about at least once a day. 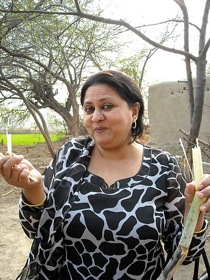 Whenever Nasreen comes upstairs to share the latest gup-shup (gossip) about the maid or drop off a utility bill, she asks, “What did you cook today?” If she discovers that I’ve made only soup and sandwiches, she’ll send me a tray of daal and rice or a curried meat dish. More than once I’ve gone downstairs to see her after 9 p.m. and found her thawing substantial amounts of meat.

“Wow, Nasreen Auntie are you having a party?”

“No no. No party. Just my sister, my brother-in-law, their five sons and my three cousins are coming for dinner.”

“Yes yes. They are coming are 11 o’clock…you must meet them! I am making mattar qeeema, chicken, shami kabobs and daal-chaval.”

Usually I manage to decline the invitation only after tasting the smorgasbord of dishes. Today we’re cooking for only seven people, but she’s just as exuberant while she explains every step. We finish the salan and move on to the rice. I wonder why we didn’t have both cooking at the same time, since the rice will take much longer to cook. Before putting the rice in the pot to boil it, she soaks it and lets all the tiny insects and broken casings rise to the surface.

“It is very important not to touch the rice. You should shake it; don’t mix it with your hands.”

We wait at least 15 minutes while the rice expels the unwanted elements and sends them swirling toward the top of the bowl. Nasreen picks out each little bit separately and throws it in the sink. I stir the cows’ feet and remove the dish from the flame.

Westerners may look on the lives of Pakistani women and imagine them to be hapless housewives, banished to days of slaving over a hot stove. Only one out of every three women in Pakistan can write well enough to sign her name on official documents, and only a very small percentage work outside the home. It’s tempting to see the kitchen as an oppressive prison, but most ‘inmates’ I’ve met are in no rush to stage a jailbreak.

I once asked a middle class Pakistani housewife if she’d rather be out working. “Work? Why would I want to work? Whole the day I spend cooking, eating snacks, drinking chai with my friends, having some gup-shup…”

Nasreen checks the pot of rice, determines that it’s done cooking, and strains out the extra water. We thoroughly mix the rice with the salan and carefully dot yellow food coloring on the top. As the biryani steams, we set the table and gather the family for lunch.

Pulling off the lid excitedly she exclaims, “See, now you know how to make the real Pakistani biryani!”

Check out Heather’s blog for Nasreen’s biryani recipe. Heather is a student at Matador U.

On My Way To Work: Lahore, Pakistan

6 Ways To Experience Art and Culture in Lahore, Pakistan

What NOT To Do in Pakistan