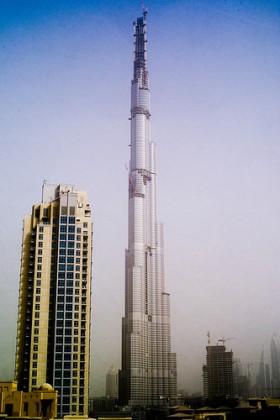 The Burj Khalifah under construction. Joi

There are a lot of similarities between Dubai and the biblical city of Babel.

Last May, I described the Dubai / Babel connection, and put the call out for a “DuBabel” correspondent.

Now that Dubai is officially home to the tallest building in the world, the Babel analogy is especially creepy.

The Tower of Babel collapsed, after all. In the post 9/11 world, the idea of a collapsing sky-scraper is truly terrifying.

As Dubai celebrates the opening of the Burj Khalifah, the last thing anyone wants to think about is a disaster on the scale of 9/11. Voicing such a possibility is practically taboo.

But, with the Babel analogy already a point of discussion, the question must be aired:

Could the Burj Khalifah actually fall?

Or is the only Dubai collapse we need to worry about financial?

I’m curious to hear what you have to say, so please leave a comment below!

This cappuccino made with real gold is classic Dubai

Vibrators, abayas, and the shway shway sisterhood of Dubai

17 signs you were born and raised in Dubai

I’m an American expat living in Dubai, here’s what it’s like to watch the US election

British woman detained indefinitely in Dubai for drinking on her flight