“I know what this is,” one of my fellow students, a police officer, whispered to me. “This is see how long we can make the gringos stand at attention in the blazing sun.” I chuckle, noticing the sweat running down his face.

This was my fifth day in Calnali, Mexico, placed in a class with fourth graders for my first Spanish immersion. I stood on the playground watching as the kids sang the national anthem, feeling the afternoon warmth.

After this daily ritual, I returned to my seat, knees banging on the underside of a desk way too small for my six-foot two frame. Scattered around in the different classrooms were fifteen of my fellow adult students, all police officers and firefighters, in the same predicament. I had laughed when the program director had placed us in our classrooms, but it took me only took one day to see the wisdom of the decision.

Not long ago I had fancied myself able to speak Spanish simply because I could ask where the bathroom was.

The afternoon’s class was math. I sat and watched, struggling to make out words I know, as the problems are worked out on the board. The boy next to me, a sharp looking youngster in blue uniform pants named Leonardo, told me I’d been selected to answer the next problem.

Not long ago I had fancied myself able to speak Spanish simply because I could ask where the bathroom was. On a whim I took a class offered at work: a firefighter/police officer language program called Placas sin fronteras, Badges Without Borders. It was a class to teach cops and firefighters some basic Spanish to better serve the growing Hispanic population in Indianapolis. 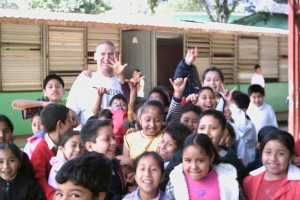 Author with his classmates

The class was four hours a week for six months followed by a month in Mexico. I started by relearning sentence composition: things like verbs, nouns and prepositions. There was no way! It seemed like I barely spoke English. I wanted to quit before I began.

“Gracias por su ocupación,” I told Leonardo as I stepped toward the board.

“No, Escott,” he replied as if speaking to a younger child.

My name is actually Scott, but I had noticed that they all took to calling me Escott. I pretended it was a nickname.

“No Escott,” his nine-year-old voice continued, “Gracias por su pre-ocupación.” He stressed the missing syllable I didn’t even know I needed.

“Sí,” he replied, showing me the difference between the two words with his normal game of charades.

As I thumbed through the pages of my Spanish-English dictionary, one of the stars of the class solves my fraction problem. Dodged that bullet. Maybe I am smarter than a fourth grader after all.

ocupación, pronounced oh-cu-pa-cion, my word, meant busy or occupied, Leonardo’s word meant worry or concern. He was correct of course; I had wanted to say thanks for your concern.

That’s how it went over and over. I’d talk or answer questions and the kids would correct my Spanish. Professor Marten just let it flow while I scribbled down the new words or corrections in my notebook. Every day for a week, Leonardo, my new best friend, greeted me with the word preocupación.

By Friday afternoon and I could feel a tangible anticipation for the end of classes. I checked my watch; it was just minutes from the afternoon whistle, the signal that I’d be free for the weekend’s events. Ever-present Leo was in his normal position, hovering over my desk checking the geography paper that I had yet to finish. When I announced I was done, a gaggle of kids formed to guide me toward the drop off box.

Professor Marten called me to his desk and my guides tugged and prodded me in the proper direction. I was feeling pretty content having just completed my second week in fourth grade. As I was handed my reading book, I noted the assignment: read the first three chapters over the weekend. I nodded excitedly as I accepted the book. Then I noticed it was a third-grade reading book. The teacher had demoted me one year. 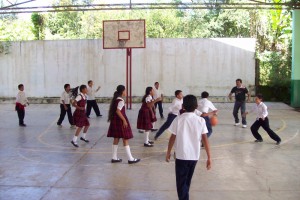 On the playground Scott found himself in firefighter mode

By week number three, I was leading the class. The students each wrote down a question they wanted to ask me and I read them aloud. I felt a little self-conscious as they laughed at my mispronunciations. How old are you? I read. “44” I answer, feeling suddenly very old.

Where are you from? I pointed toward the map; “Indianapolis Indiana.” Do you have kids? I read questions and they laughed, and soon enough I was speaking slower, striving to get the words perfect and avoid the mocking.

Cómo está señora? I asked kneeling over a frail-looking women as she grimaces up at me. Now, an Indianapolis firefighter again I was speaking with an elderly woman lying on the street outside of a shattered car. Mexico and the fourth-grade were two weeks behind me.

I moved smoothly through the conversation, slow and steady, just as I learned with the kids. I pushed through words I didn’t know by pointing and describing just as Professor Marten taught me.

I switched from fourth-grader to firefighter as I checked him over.

My language skills are still far from perfect, and yet she and I communicate like old friends as we talked through her injuries together. After we finished the medical evaluation and I handed her off to the ambulance crew, I found myself troubled by the fact that the crew doesn’t speak Spanish. I wondered if I should go along as an interpreter. I felt almost guilty, like I was leaving her to her fate. After 26 years of handing patients over to an ambulance, I’d never felt this way before.

As I traveled back to the firehouse, rational thought intervened. I felt the inner satisfaction that came from success, and I thought of the difference between this patient and my first Spanish-language patient: Leo.

Back in Mexico one morning, he received a nasty dodge ball hit before class. I switched from fourth-grader to firefighter as I checked him over. He laughed at me as I struggled to find the words to express my concerns. As I helped him up, he told me everything was ok and that it was time for us to get back to dodge ball.

Another run came in and the dispatcher told us there was a possible Spanish language barrier. I smiled to myself as Leo’s words came back to me: it was time to get back in the game.