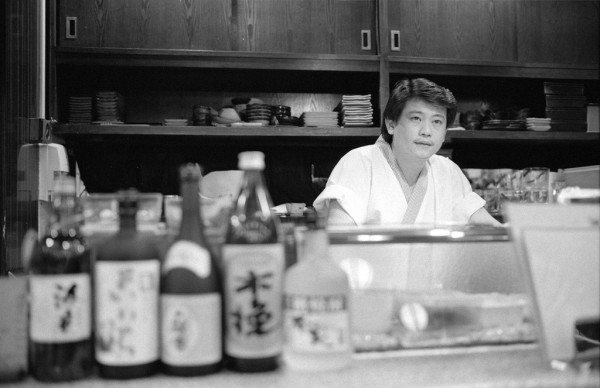 Keep your sushi simple. Avoid rolls with mayonnaise or anything deep-fried.

If the highlight of your meal is a spicy tuna roll, you’re in trouble. 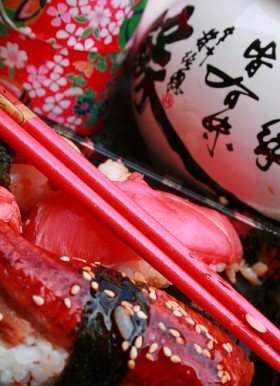 Make no mistake: although sushi is often the main attraction in upscale Japanese restaurants, there is lots of lousy sushi out there. Let’s start from the bottom of the barrel.

I don’t care if it was made at Whole Foods with all-natural ingredients; the freshness and quality of fish in most prepackaged sushi samplers is laughable.

Why spent a minimum of $8 on a cheap sushi lunch when you can duck into an atmospheric restaurant and get ten times the quality for only twice the price?

On The Cheap Side

Fast food Japanese places restrict themselves to maki rolls when it comes to sushi.

The reason? The “rollers” don’t have to be trained as full-blown sushi chefs, and the fish doesn’t have to be properly cut with an amazingly sharp knife. 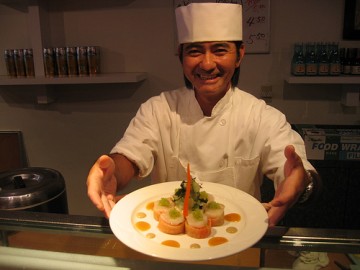 Look for a slightly nicer Japanese restaurant featuring a sushi chef who:

Keeps a clean cutting board.

The cleaner and neater the work station, the better the chef.

Has charisma in his presentation.

You want to be able to talk to your sushi chef, joke around with him, ask him for recommendations.

Chefs in Japan typically spend two years’ training on rice alone, as it is the essence of sushi. Unlike sweet rice served at meals, sushi rice is repeatedly rinsed to clean up the grains and seasoned with vinegar and the chef’s own secret ingredients.

Fortunate enough to have a woman as your sushi chef?

That’s a rarity. For better or worse, sushi is a man’s world. If you’re living near Los Angeles, be sure to check out Sushi Go 55, run by the country’s first female sushi chef, Tomoko Morishita.

Trevor Corson offers the following guidance in his fascinating book The Story of Sushi:

“The order in which the customer requests different types of fish is not crucial, but most sushi connoisseurs begin with leaner, lighter-tasting dish and progress toward fish with strong flavors and higher fat content.”

Here are three Japanese phrases that refer to different ways to order sushi.

Okimari: “It has been decided.”

This refers to set meals and sushi samplers, menu items that have a fixed price and require very little thought. Still, there is usually a good variety of fish to be had.

If you’ve been around the block with sushi restaurants and know what suits your palette, go ahead and order fish-by-fish. Most venues will present only two pieces of sushi for each order – the idea is to appreciate the variety.

Omakase: “Please decide for me.”

Saying “omakase” while sitting down at the sushi bar is probably the smartest decision you can make. 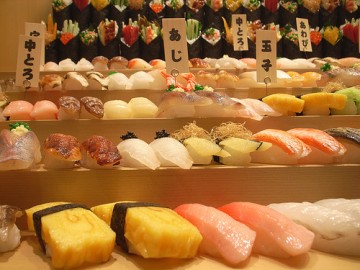 Sushi chefs know which fish are the tastiest to have arrived that day, and omakase gives them an opportunity to show-off their skills and experiment with presentation.

The only downside of omakase is the expense: if you ask the chef to choose what’s best, he will most likely assume you aren’t concerned with the price.

Many chefs will use less rice for an omakase order, so you may eat more fish without filling up so quickly.

3. NO chopsticks, NO wasabi, NO soy sauce

The most ignorant thing you can do in a sushi restaurant is to pick up a perfectly formed nigiri topped off with the freshest bluefin tuna the Tsukiji Market has to offer, and proceed to dunk the entire slab of fish into a dish of wasabi and soy sauce.

In old Tokyo, sushi was a finger food sold on the street. Many westerners traveling to Asia assume everyone uses chopsticks for all varieties of food – this is simply not true.

Sushi is meant to be eaten with your hands. 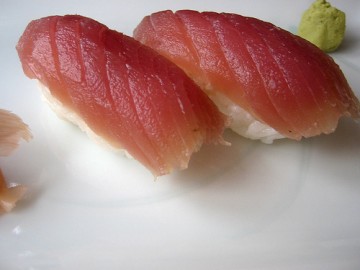 Give respect to the taste of the fish itself. Every morning good sushi chefs are scouring fish markets to choose only the best catch for their restaurants.

A lot of thought goes into the weight, color, texture, and age of the fish… which is one reason many Japanese chefs are puzzled when their American patrons ruin the taste by overpowering it with salty soy sauce and strong wasabi.

Did you know that the vast majority of Japanese restaurants in the States serve fake wasabi, an inferior horseradish product?

Ok, by now you’ve got the basic protocol down. Let’s try some sushi.

Make sure your hands are clean by wiping them down with the damp cloth provided.

Insert into the mouth upside down so that the “fishy side” touches the tongue first. Get it all in one bite, and mindfully chew, enjoying the tasty sensations.

If you’re moving on to a different type of fish, be sure to eat some ginger to cleanse the palate and wipe your hands again to eliminate traces of the other fish.

At the end of the meal it is proper to drink green tea. Congratulations. You are now a certified sushi ninja.

5. And Now For Something Completely Different 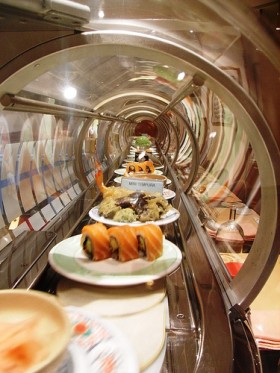 Conveyor belt sushi is becoming increasing popular outside Japan. Instead of placing your orders with a chef or waiter, diners simply lift their choice of sushi off a belt that rotates around the room.

The dishes, which are counted at the end of the meal, are color coded to determine price. Kaiten-zushi is usually much cheaper than a regular restaurant.

Some rather twisted people like to pay a lot of money to eat sushi off a naked body.

Although women are typically the centerpieces, men can be used as well (called nantaimori).

Do you have a favorite sushi restaurant?

Give us a heads-up in the comments, and be sure to leave a link – maybe the chef will give you some free maki in exchange for the review 😉

Why is sushi the sexiest food on the planet?

If you’re interested in traveling to Japan to try some really fresh fish, brush up on Japanese customs with Turner Wright’s Zen-like advice.

Want something even more exotic?

Nellie Huang explains why every day is an adventure when you’re eating in Asia.

Tagged
Culture Trip Planning Japan
What did you think of this story?
Meh
Good
Awesome

30 awesome Japanese idioms we should start using in English 7 adorable English villages that are straight out of a storybook The 9 coolest flags in the world and the meanings behind them 21 amazing images of the new Seven Wonders of the World 9 boardless, cardless games to play anywhere