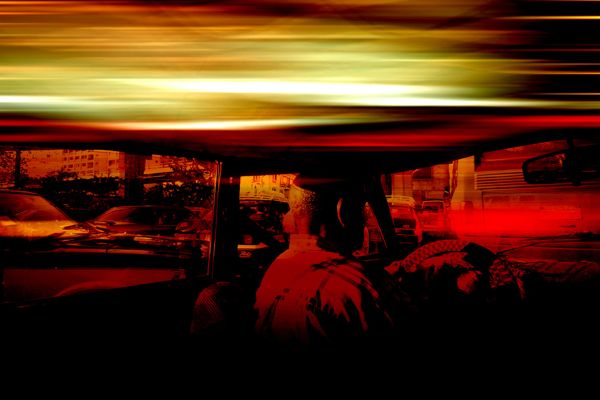 With cheerfully mercenary taxi drivers, unpredictable traffic, and a Super Mario Kart approach to the art of driving, you never know what to expect.

Taking a taxi in Cairo is the Egyptian equivalent of Russian Roulette.

You’re going to need nerves of steel, plus a little bit of luck, if you want to arrive at your destination with life, limb and wallet all intact.

There are no meters, and no set fares, so the drivers charge as much as they can. Exploiting tourists has understandably been raised to an art form – a sort of legalized, semi-consensual mugging – so you want to appear as integrated into the local culture as possible. 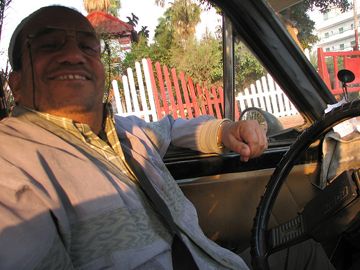 Think about how you are dressed when you go out. In general, the fewer clothes you are wearing, the higher the fare will be.

Bermuda shorts and a muscle vest never look cool, so why pay extra to wear them?

Most importantly, lose the bottle of water.

No, really! Nothing screams “tourist” so loudly as a foreigner clutching a bottle of mineral water to his (or her) chest like a travel comfort blanket.

At the very least, bury it in your bag. And it helps if your bag actually looks like a bag, rather than a strap-tastic day pack with multiple-pocket-disorder that, let’s face it, you wouldn’t be seen dead with back home.

Finding a taxi in Cairo is never a problem.

They patrol the streets of the city like ravenous mechanical sharks, seeking out easy prey. 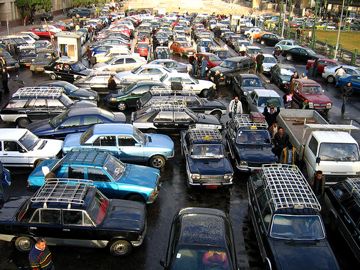 Flag down a taxi by raising your hand slightly, as if you are bidding at auction.

Don’t shout and wave your arms: you are not on a Hollywood film set, and the locals only shout when they are talking to someone who is standing right next to them.

Greet the driver through the window with as confident a “salaamu alaykum” (peace be upon you) as you can muster, and just state the general district of Cairo you want to go to. You can be more specific when you are nearer your destination.

If the driver’s happy to take the fare, he’ll flick you a nod or a grunt whilst pulling away, so jump in quickly. Women should avoid sitting next to the driver, unless you want him to think you have a different sort of ride in mind.

To survive the journey with only minimal psychological damage, you will need both the patience and the fatalism of a saint.

You’ll spend most of the ride spluttering and wheezing your way through the inevitably gridlocked Cairo traffic, but when a gap does open up, you’ll career through it like a kamikaze rally driver on crank.

Lane markings and traffic lights are treated as irrelevant urban art installations, and rules of the road as nothing more than a quaint rumour.

Most drivers think indicating direction is a sign of weakness, and only use their brakes as a last resort.

They use their horns, however, with passion and commitment: like a cacophony of bats that avoid bumping into things by constantly squeaking. 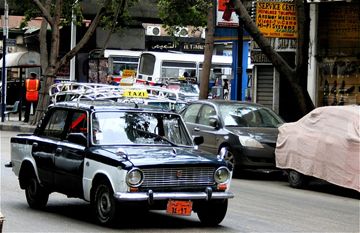 Your driver will smoke, and he will talk on his mobile phone.

He’ll lean out of the car to abuse other drivers, yet he’ll manage to look you in the eye whilst asking the most intrusive personal questions.

To cope with all this, you need to adopt the insha’Allah (“God willing”) approach to life.

The insha’Allah world view says that everything that happens on Earth is God’s will.

Even if you are hurtling the wrong way down a one way street, while your taxi driver simultaneously texts his wife and grills you about yours, there is nothing you can do about it.

Your story has already been written, so just relax. 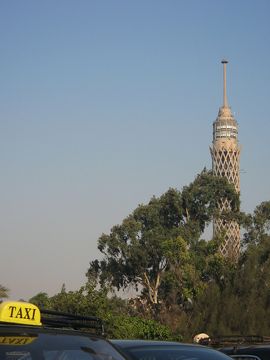 Failing this, tool up with some ear plugs and an eye mask, and try to ride it all out in the same way you would a bad acid trip.

There are two schools of thought on this. One, is that you should negotiate the fare before you even get in the car. This is what most tourists do, but it’s hard to get a fair price this way.

Alternatively, if you know roughly what the journey should cost, then it’s better to pay at the end. Be sure to err on the side of generosity, and make sure you have the correct change. The driver certainly won’t give you any of his.

There is a certain technique to this. Jump out of the cab, and pass the money back in through the window. You should aim to pay with as grubby and disorganised a bundle of notes as possible.

By the time your driver realizes that he has lost the opportunity to scam you, you’ll be long gone.

Now’s the time to give thanks to your higher power of choice that you survived the journey in one piece.

Take a life-affirming breath of exhaust fumes and exotica, savour the contrast between the car horns and the Call to Prayer, and set off to explore the boundaries of your new-found insha’Allah approach to life.

You might even take that bottle of water out of your bag.

For a much more chill side of Egypt, check out Benjamin Orbach’s guide to Basata, a peaceful beach town on the Sinai.

What did you think of this article?
Meh
Good
Awesome
Bookmark
Posted In
Trip Planning
Destinations
Cairo, Egypt

The Egyptian uprising from January 25th to February 1st