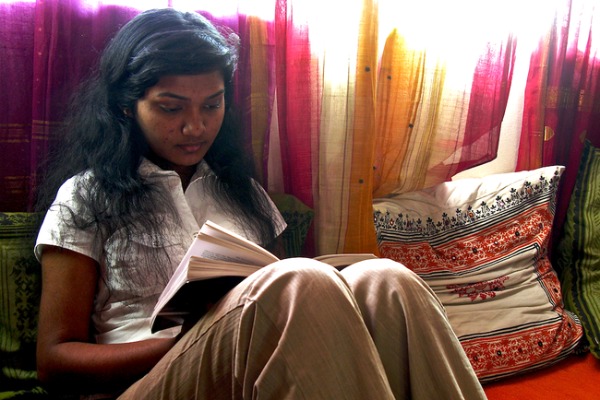 When I told my mother, “I’m thinking about going to back to school,” her eyebrows bunched in confusion. This was years ago, when I had just graduated from college and was, in my parents’ eyes, living the American Dream. I was earning more money than my father, a machine operator, and I spent my days in a rolling office chair beneath the hum of an air conditioner and fluorescent lights.

While my parents raised my brothers and me to become college graduates, it was never under the guise of the pursuit of knowledge. They view education as a practical tool to finding gainful employment outside of a factory.

War and poverty create pragmatic people. My parents met during a three-day journey across the waters of the South China Sea from southern Vietnam to Thailand, where they became refugees en route to the United States. Once here, they started a family as a matter of course, to ensure that there would be a brood to care for them in their old age.

It was hard for my parents to understand my restlessness, my desire to learn and experience new things. Shouldn’t I be content in that rolling office chair? After all, I was doing pretty well—especially for a girl. 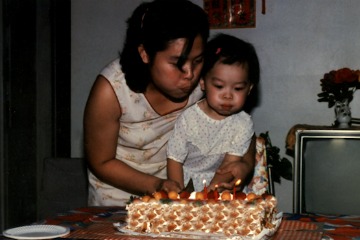 Amy as a child.

I never did go to grad school. I did something worse—I became a volunteer teacher. It was a calling from the Asian University for Women in Chittagong, Bangladesh, the only academic institution of its kind in the region. Young women from Sri Lanka, Cambodia, Nepal, India, Pakistan, and Bangladesh convene in Chittagong to earn an education.

My students understand the precarious position of being a daughter in a pragmatically patriarchal culture—and they’re here to transform it. It’s a lot of responsibility to hoist onto the shoulders of an 18-year-old girl, a student like Jonu who came from the southwestern Indian state of Kerala. Jonu is one of our more fortunate students, born into a lower-middle class family. She spent much of her formative adolescence in boarding schools.

Jonu struck me as nervous and pensive, her broad face framed by a thick row of short fringe at the top and pulled back, clamped neatly between a hair clip. She sat stiffly upright at her desk and she always seemed either occupied with another thought or utterly confused.

She came to me after class one afternoon. “Ma’am, I do not know how to laugh in class.” This was how she began our first conversation.

Jonu explained how she was taught that students should never share an occasional chuckle with their teachers, that a student should learn in class rather than enjoy herself. I told her that she was under no obligation, but that if she felt like giggling, she was free to do so. A few weeks later, in the middle of class, I saw her crack a smile.

Jonu, who approached learning with the same pragmatism as my mother, soon got into the habit of arguing with me every day. “Why is it important to study literature?” she wanted to know. “Why should we care? What’s the purpose? Isn’t it a waste of time?”

Many of my students have never been asked what they thought or felt. In their prior schooling, they received directives on what to think and performed accordingly. The idea that education could involve questions with multiple answers, or no real answers at all, initially confounded them.

It particularly confounded Jonu. When she wouldn’t stop bothering me with questions, I asked her to try to read a novel to see if she would enjoy it. I suggested Charlotte’s Web. 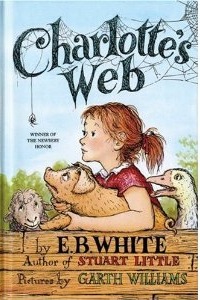 Initially she was skeptical. “It’s so childish, ma’am,” she told me. “The animals talk!”

I convinced her to not to give up on it. If she let herself connect with it, I said, she would. After she finished the book she came back to me and cried.

“I really loved the book. It made me so sad and miss my friends back home.”

“I’m so sorry. But I’m really glad that you liked the book so much.”

“But ma’am,” she said, wiping tears from her cheeks. “Now I cannot read another story again.”

“Why not? I thought you said you liked reading it.”

She made her patented inexplicable-pain face: Her forehead wrinkled toward the middle and she scrunched her nose like she had just swallowed sour milk. “It’s just…”

“Now I’m worried that I’ll never read another book that is as good as Charlotte’s Web.”

Despite her fears, Jonu continued to read voraciously. I was so proud of her until an offhand comment from a colleague stopped me dead in my tracks.

“Jonu thinks that women are inferior to men,” the teacher informed me. The teacher went on to explain that during a discussion about gender roles, Jonu had theorized that these roles existed for biological reasons, and therefore it made sense that women should be regarded as inferior.

“So, hey Jonu,” I said casually after our next class. “I hear that you think men are superior to women. Is that true?”

Her eyes shot down and a slight smile rose on her face. “Well ma’am,” she said, “doesn’t biology make us the way we are? As women? It keeps us from doing lots of things. Isn’t that so?”

“Actually, no. We need to talk about this, because I can’t teach a student who thinks women are inferior.”

I think about the way my mother was raised, how there was no one around her to tell her that, if she chose, she could be more than a housewife.

We discussed the idea of socialization and how it dictates a lot of behavioral norms. But I also understood where she was coming from. It’s hard not to accept our lesser position as women when our inferiority is something that’s been ingrained into our cultures, minds, and lives. It’s in the way our own mothers raised us.

“Women are told to stay in the house and cook and clean, but there’s no biology behind that. Men can do it too, you know? It’s just what we’re taught when we’re kids.” I think about the way my mother was raised, how there was no one around her to tell her that, if she chose, she could be more than a housewife.

Jonu nodded. “This is something I’m still thinking about.”

“Do you think you’ll ever believe that women are equal to men on all levels?” I asked.

My mother remains bewildered as to why in the world I would work for no money, but moments like these are my paycheck. I’m trying to use my pragmatic upbringing to help others grapple with the abstract. This is where my students decide to push aside stifling expectations, to rise above them, and to learn for learning’s sake.

This article was originally published on Glimpse.org in March 2009 as “Ma’am I Do Not Know How to Laugh in Class.”

Are you a writer or photographer who will be living abroad in the coming semester? If so, you may be eligible to apply for the Glimpse Correspondents Program. Benefits include a $600 stipend, professional editing support, career training, and guaranteed publication on Glimpse and Matador Network.

Tagged
Culture Narrative Bangladesh
What did you think of this story?
Meh
Good
Awesome

I Thought Bangladesh Was a Country Difficult To Love. I Could Not Have Been More Wrong

The Human Cost of Wildlife Conservation in India

Coming To Grips (or Not?) With Violence as Communication in Bangladesh

Recipes To Celebrate Holi, the Indian Festival of Colors

Book Review: Where Am I Wearing? by Kelsey Timmerman