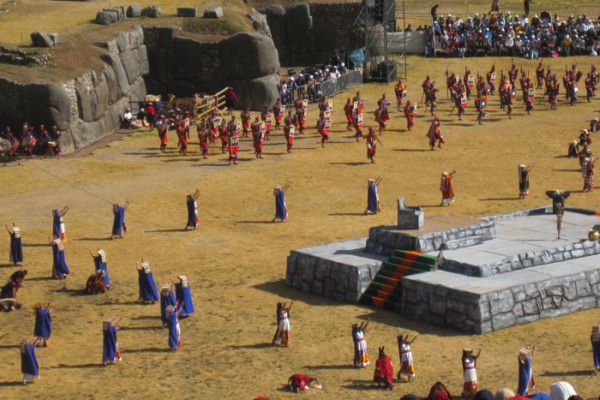 It’s blisteringly hot and I huddle under Gabriel’s hoodie, longing for home, for a bottle of luxuriously thick 60+ factor sunblock, for ice-cream. Below us, richly costumed dancers the size of chess pieces move in precise geometric patterns about the central faux-stone platform. The ruins of Sacsayhuamán provide a stately backdrop. Further below is the city of Cusco, and to our right are golden-green rolling Andean hills.

The Inca, the emperor from which an entire culture drew its name, and his high priest speak at length in Quechua, striding about their stone platform with arms spread. The script in front of me tells me it’s the “coca ritual,” but I’m tired of the incomprehensible speeches and let my attention wander to the people around me.

The woman in front is full of vivid energy, threateningly waving a bag of rubbish at the child in front of her every time he stands up, turning to offer us some of her fruit, laughing long and loud. To our right is a more serious, middle-aged señora, in the colourful, voluminous skirt favoured by Andean women, her long dark hair in two joined braids. Her energy has obviously been sapped by the long wait. I overhear her grumpily informing someone who is infringing on her space that she has been here since 5 am.

This is Inti Raymi: a grand festival stitched together in 1944 from colorful scraps left by Incan historians, archeological finds and the contemporary rituals of indigenous communities. It was one of the four most important of the Incan celebrations carried out in Cusco – the center of the Empire and the navel of the world. Taking place on the winter solstice, when the Sun God is furthest from his children, it celebrated the origin myth of the Incas, gave thanks for a good harvest, and pleaded with the Sun to return and ensure the continued fertility of the Earth.

Then the Spanish arrived. In 1572 Viceroy Francisco de Toledo declared the festival pagan and contrary to the Catholic faith and absolutely prohibited its practice. 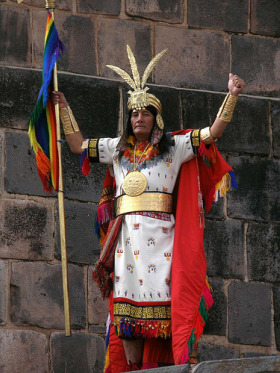 Today it has surged once again to become the second biggest festival in South America, second only to Brazil’s Carnival. More than 150,000 foreign and local tourists descend on Cusco each year, most paying US$80 for a reserved seat in the grandstands closest to the action.

We sit on the rocky outcrop above the performance space, having arrived at 8:30 am to find around 100 people already there. We dozed, chatted and made sandwiches as we watched the crowd grow over the course of hours. Now, with the performance in full swing there are thousands of people pressing in on all sides; they are mostly local indigenous families but with a handful of foreigners mixed in. Vendors are hawking everything from hats to potato crisps to pollo al horno, and the warm smell of sweat and greasy chicken hangs over the crowd. An enthusiastic young man to our left gets us all involved in an erratic Mexican wave as the hour draws nearer and the excitement peaks. It feels like a football match.

Those with reserved seats trickle into place with minutes to spare. At 1:30 pm a steady drumbeat fills, and a procession of stately Incan nobles begin to descend from the ruins to the wide open space at our feet.

Earlier I’d asked Gabriel why the tradition had been revived. “Turismo, supongo,” he’d scoffed. And it is, no doubt, a grand source of income for a city that has come to thrive on the tourist dollar. But as I sit among throngs of locals who had waited hours in the hot sun and now proceed to yell and hurl rubbish at those who dared to stand and block the view, I wonder if it’s so simple.

Nobody pretends Inti Raymi possesses even a scrap of authenticity. It is an evocation of a long-dead past, but a past that defines the Peruvian national identity to an almost unimaginable extent. Cynical travellers seeking the elusive “authentic” may deride the celebration as a targeted tourist trap, calculated to extract as many dollars from foreign pockets as possible; but the truth is more complex.

The reinvocation of the Festival of the Sun rode in on the wave of indigenismo of early 20th century Peru, a time when the intellectual elite of Cusco seized the indigenous cause seeking to lift them out of lives of miserable servitude, to “reawaken their consciousness,” remind them of their rich cultural heritage and the peaks they had reached in the Empire of the Incas – the Children of the Sun.

Over time, this identity was claimed for all Peruvians, the great Incan heritage was embraced by European descendents and mestizos (those of mixed heritage) alike, and the social struggle for the rights of indigenous communities subordinated to the project of nation building, of establishing a national identity and culture.

Admittedly, tourism was not far from the minds of Dr. Humberto Vidal Unda and the other organizers of the revived Inti Raymi. Cusco was visualised as the center of “Peruvianness,” as a living museum which would draw tourists from all over the world. This vision was closely backed up by government funds for the necessary infrastructure. 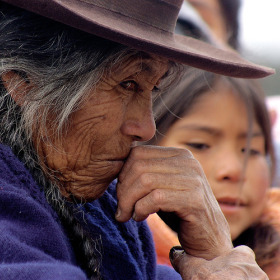 The indigenistas of 1940s Cusco were on to something, it would seem. Despite a drop in tourism this year, the streets of Cusco have been full. As we sip a cold beer in a friend’s store just below Sacsayhuamán after the simulated llama sacrifice and close of festivities, we watch tens of thousands of people from all over the world descending into the city ahead of us. Tourism is the lifeblood of the city, as many discovered this year during the tense months following the Machu Picchu disaster when tourism dried up almost completely and everybody feared for their job.

Inti Raymi contrasts dramatically with the earthy, difficult and brutally chaotic celebration that is Qoyllur Rit’i. I’m tempted to place Inti Raymi to one side, consider it an aberration in the “real” cultural experiences I’m having; but that would be too easy. Overt manipulation of national identity discomforts me, and the depressing reality is that many of the indigenous people in nearby communities can’t afford to attend a celebration flocked to by people who live halfway around the world. But the Incan heritage of Peru is rich, unique, and worth preservation. Who am I, as an outsider, to dismiss this preservation as crass, inappropriate or “inauthentic”? Some would argue that whatever the motivation behind its original impetus, the force and meaning of this celebration to local communities provides an important counterbalance to the homogenising forces of globalization. The people around me on the hill buy ice-cream and question one another about the meaning behind the on-stage endeavours, watching a manufactured version of a distant past; but it’s their past and should not be dismissed.

What disheartens me most, whatever side of the debate I choose, is not for whom Inti Raymi was recreated, or the value of its continued celebration, but the powerlessness of the indigenous people it is supposed to represent. Trod into the earth by the Spanish Conquest, it was regenerated for them, not by them, by an intellectual middle-class of European or mixed-blood descent, who saw in its practice a chance to romanticize and mythologize their own history and identity. They may or may not, as individuals, value the preservation of this aspect of their culture; what bothers me is that they are not in control of this preservation, that in the face of inflated prices for grandstand seats and allegedly politicized selection of actors to portray the most important roles, power is still firmly out of their hands.

These days, the living remnants of Incan culture watch the celebrations from the hillside, an $80 grandstand ticket an unimaginable luxury.

What do you think, does tourism aid in the preservation of culture or distort it?

For more on this topic, check out Sarah Menkedick’s Tourism and the “Preservation” of Culture: A Rebuttal.

What did you think of this article?
Meh
Good
Awesome
Bookmark
Posted In
Culture
Destinations
Peru