HERAT’S MYTHOLOGY and sports stand out. Weekly Kushti and Buz Kashi matches draw large crowds. The ancient citadel has a rich history dating back to Alexander the Great. At the city’s sacred grounds, visitors pray to Allah to launch their bodies across the yard or for the strength to lift a watermelon-size stone with one hand.

The most interesting myth is one I didn’t catch on film. The one about a secret society of men who have visions. It goes like this: they occupy high positions in the province and practice a radical form of meditation wherein they reduce what they see in the meditative state to its primary colors and sounds. Blue jackets, silver lakes, emerald skies, a baby crying. They guide their lives by the meaning distilled from these visions as a group, and so they guide the province. The story is so widespread it colors the city. I can see why. Most of the Western Afghans I’ve talked with, over hash, sober, late at night at the Hotel Jaam, fit that mold. Low-brow sages. Searchers. High as hell, tripping over a repetitive memory that comes out in song or sketch on the table. 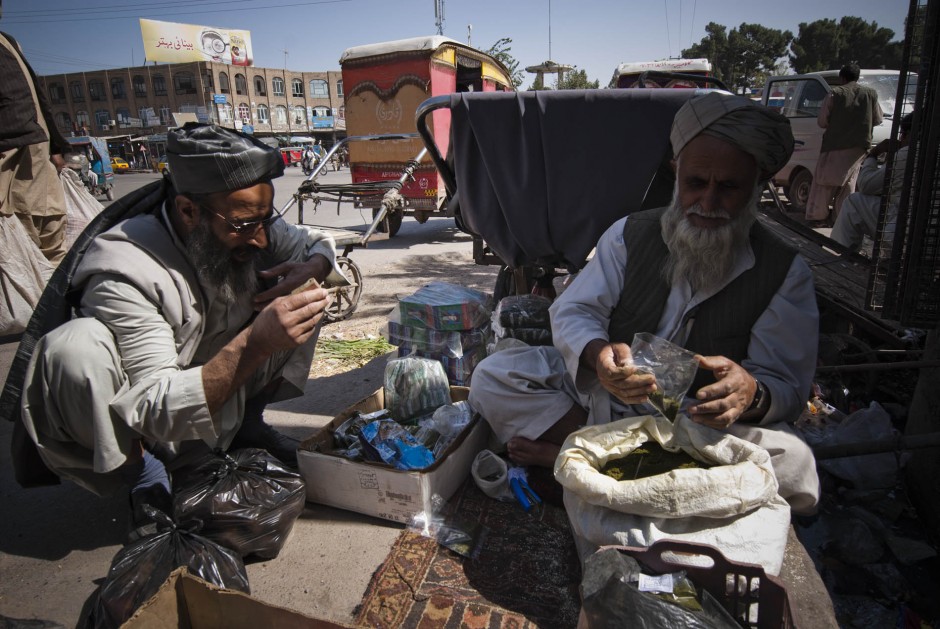 The 'Green Fairy' of Afghanistan

A street merchant bags a few grams of naswar -- Afghan snuff -- in Herat. The fine, moist, green powder -- typically taken sublingually -- is derived from tobacco treated with lime for its alkaline capabilities. It produces a dizzying high that quickly gives way to nausea and oral-esophageal burning. You'll grow to love it, especially in the dry, cold Afghan Decembers, or waiting around for a tuk-tuk, slaughtering a sheep, any of those. It's pain that amplifies the senses. It's also one of the few vices I've seen Afghan women enjoy -- embarassing because it took me two trips and several months to figure out a functional dosage. Try a pinch placed between your cheek and gum tissue grasping your left-side molars. Photos by Daniel C. Britt 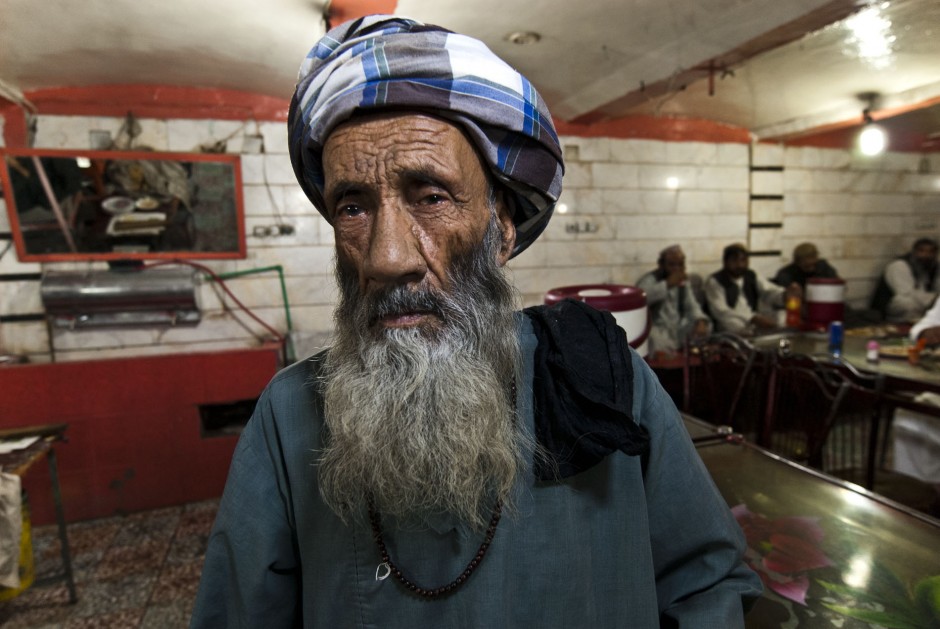 Ahmad, the manager of the Brothers Mohabat Gaznavi restaurant in Herat and the coolest cat around, poses for a picture in Brothers' dining room just a few blocks south of the Friday Mosque. It should be noted that Ahmad STOPPED grinning for this picture. It also should be noted that the kebabs in Herat's New City district are a little better but the clientele isn't as pirate-like. Photos by Daniel C. Britt. 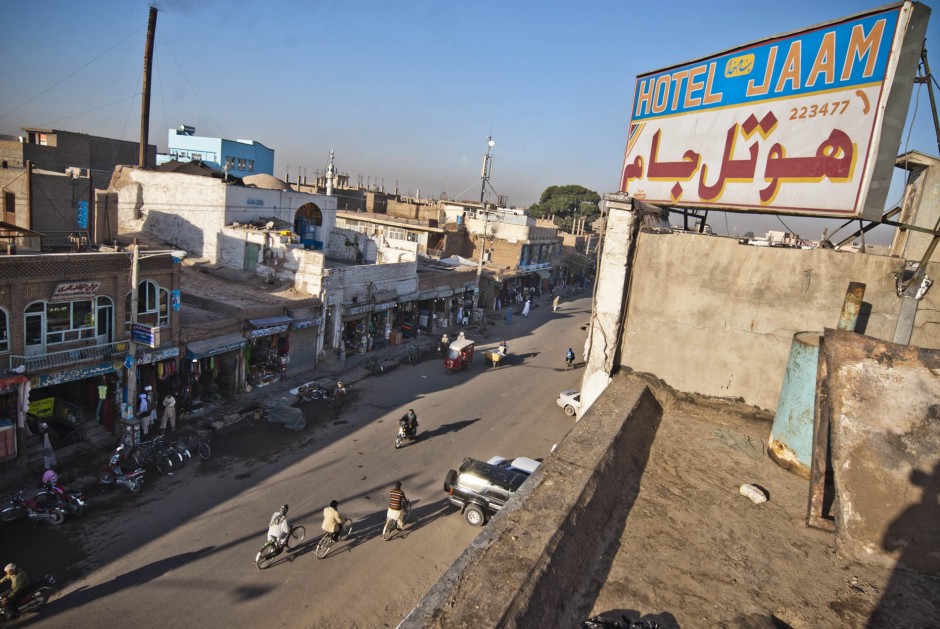 A bird's eye view from the roof of the Hotel Jaam in Herat. The Jaam's great. For under twenty bucks you get a semi-secure room with two beds, a view of the rear wing sweatshop; cold showers; squat toilets covered in broken glass; hotel staffers saddled with attachment disorders of varying degrees; and, oh yes, a closet cooler brimming with urine. Photos by Daniel C. Britt. 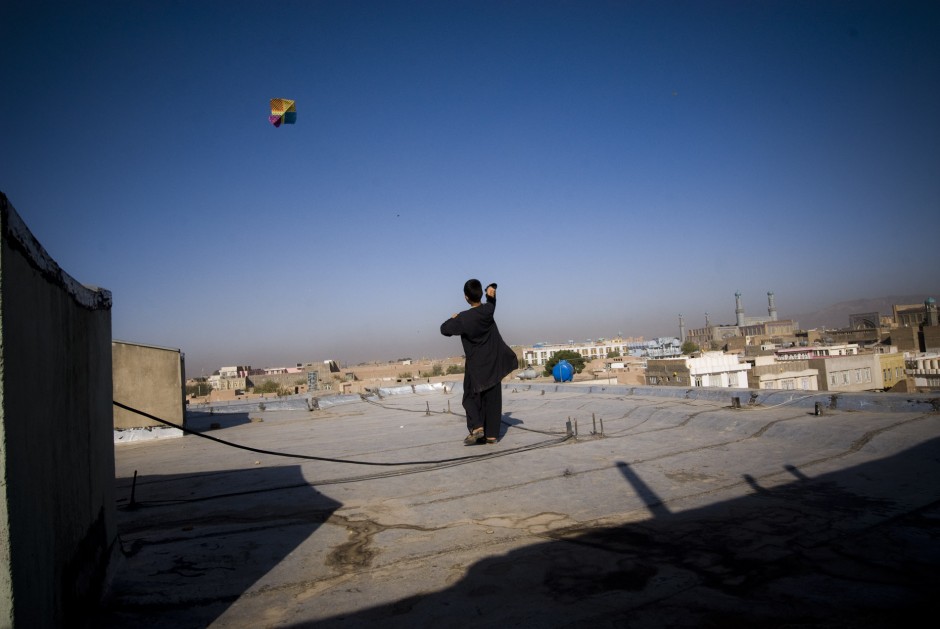 Safir, 12, flies a kite on a Herat rooftop. Legend has it, three Heratis laid down their lives protesting the Taliban's decade-long kite ban. Photos by Daniel C. Britt. 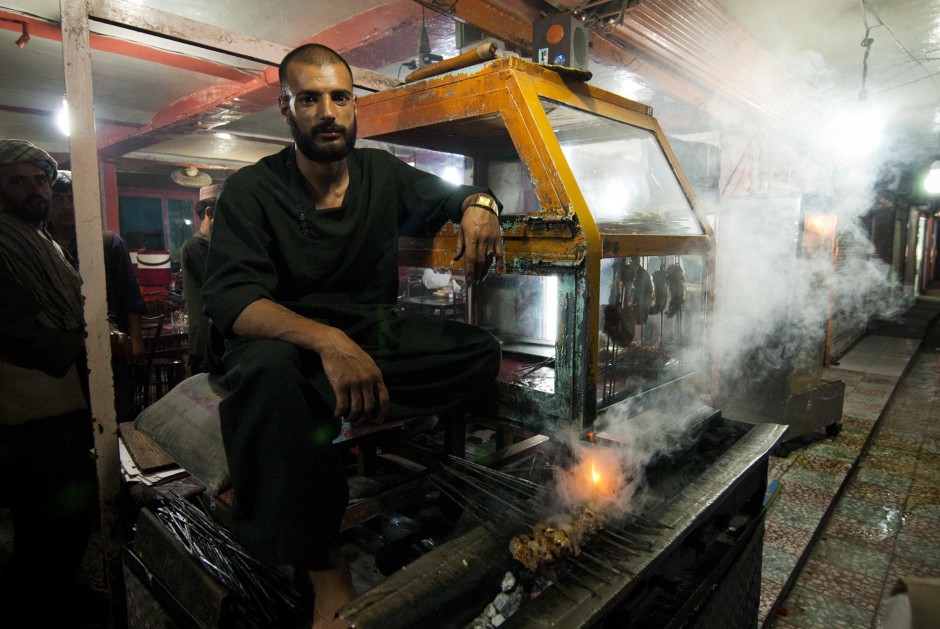 The kebab cook or 'kababi' at the Brothers Mohabat Gaznavi restaurant in Herat. This guy was beaten daily by Ahmad. Over the two weeks I witnessed these confrontations, the kebabs never changed. I don't think it was a question of his skills on the grill. Perhaps a turf war... Photos by Daniel C. Britt. 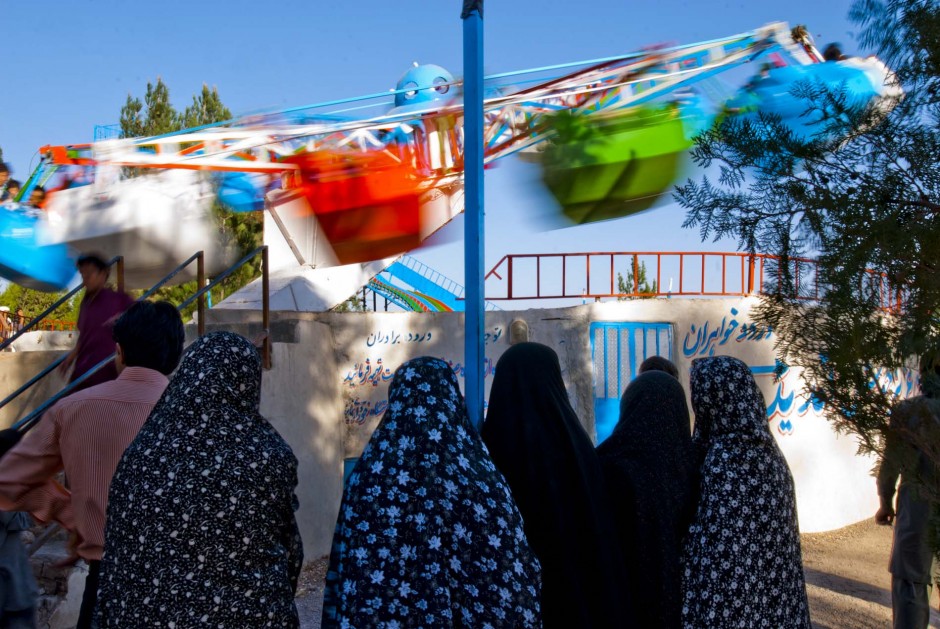 A group of women watch an amusement park ride whirl in Herat. There are virtually no lines at the Herat amusement park. There are at least nine types of roasted nut and in the picnic areas, groups of kids gather to smoke hash. Photos by Daniel C. Britt. 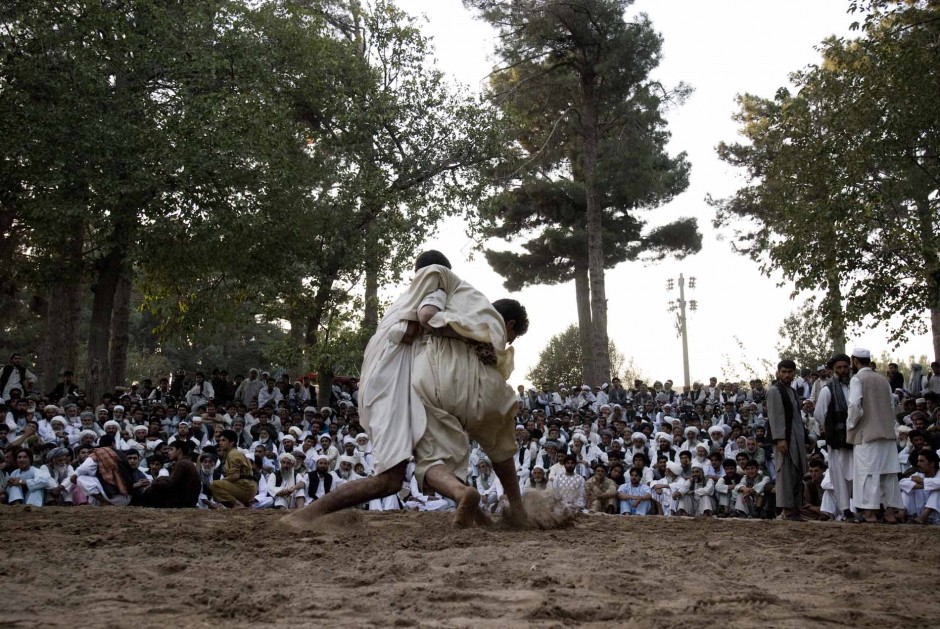 Two Kushti wrestlers attempt to topple each other at the Herat soccer fields. Every Saturday the fields are overtaken by a two-hundred or so Afghan men thirsty for a few hours of Kushti. Each contestant winds his arms into this opponent's rope belt. At the whistle, they try to body-slam each other. He who gets slammed loses the match, possibly his clavicle. Kushti contests are tournament style events that draw several teams. Individual matches usually take less than a minute. Photos by Daniel C. Britt. 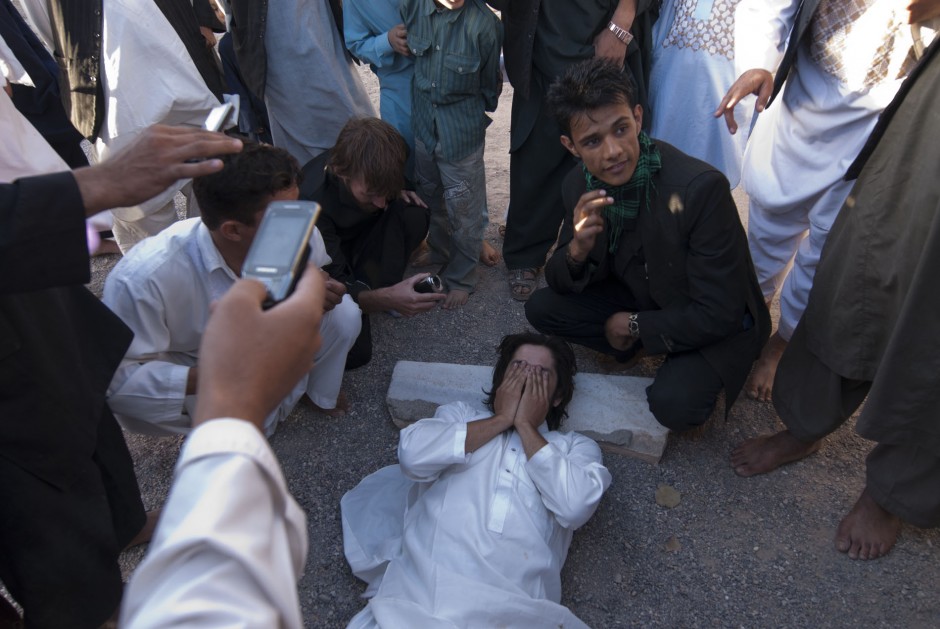 The Power of Allah

That's me covering my face on the sacred stone at the sacred grounds in Herat. It's written somewhere that lying with your head on the stone and reciting a prayer will prompt Allah to force your body into an uncontrollable log-roll for several feet. "This is the power of Allah," said Sadiki, our interpreter, the guy perched over me in black. He was really keyed-up, figuring it was my first time on the stone and that I'd roll across town or something. I tried to bump start it a little, but didn't go anywhere. The cell phone videographers were super bummed. Photos by Daniel C. Britt. 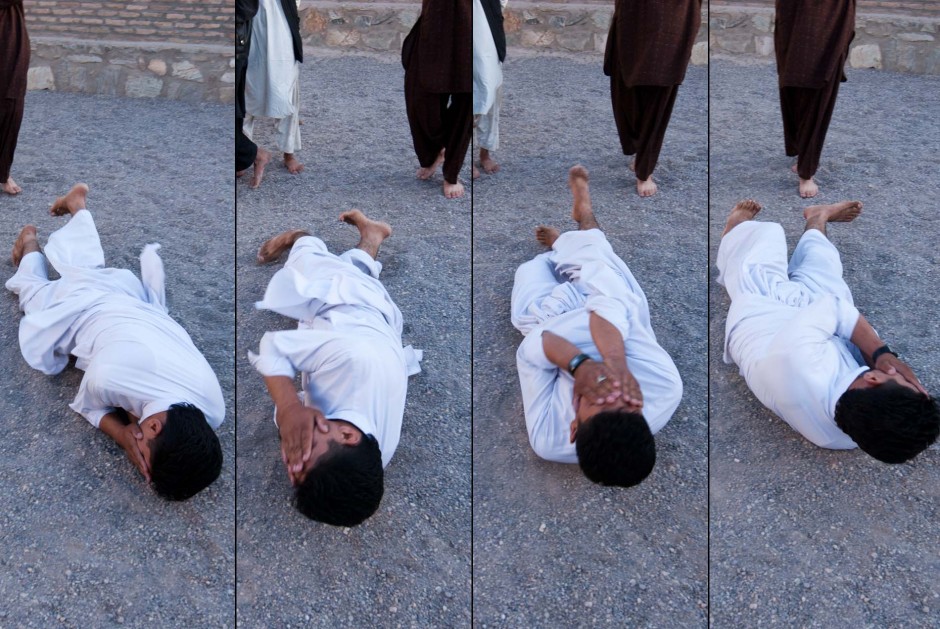 The Power of Allah 2

This guy, Toofan Rostami, felt the power. Last syllable of the prayer dropped and he flew off like a bottle rocket. Photos by Daniel C. Britt. 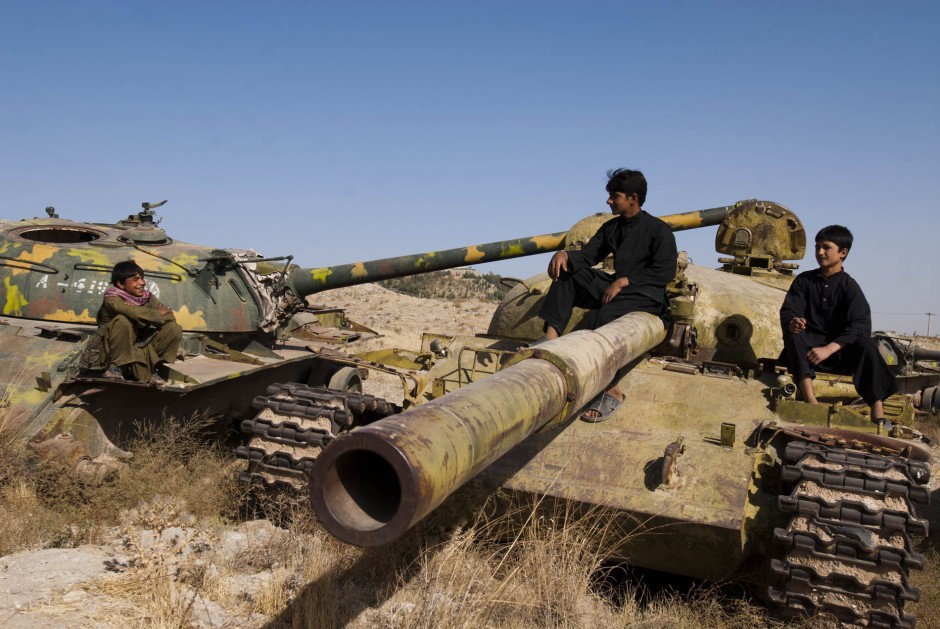 Chillin' on a Tank 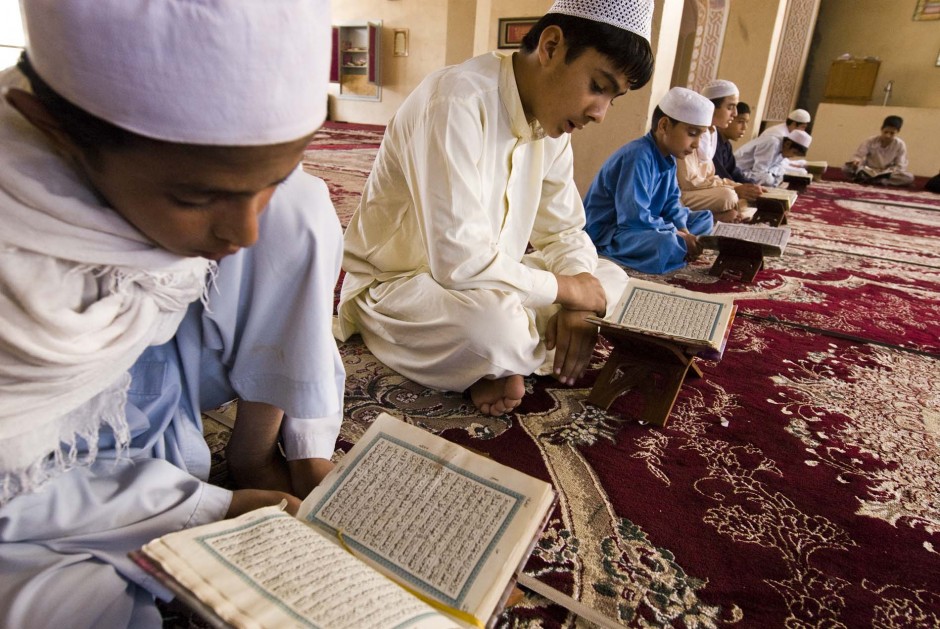 Boys hum and sway to-and-fro to memorize passages from the Qu'ran at the Herat Madrasa nestled in the old part of the city. Photos by Daniel C. Britt. 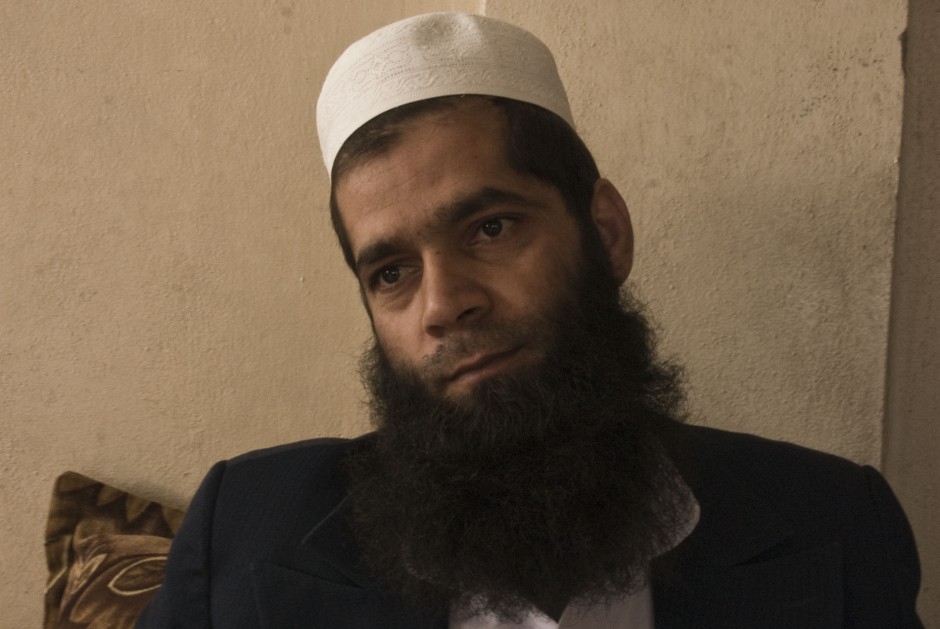 Former Taliban fighter Nagibullah teaches methods of memorization and interpreation of the Qu'ran at the Herat Madrasa. A traditional Pashtun, he may invite you to his family home for a meal. It wasn't bad: scrambled eggs with tomatoes and flat bread. 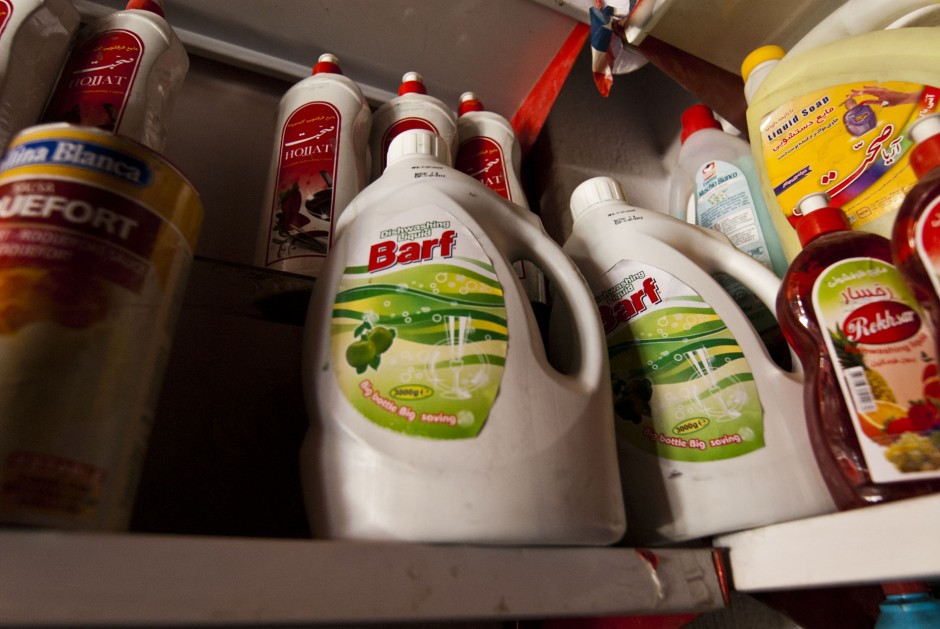 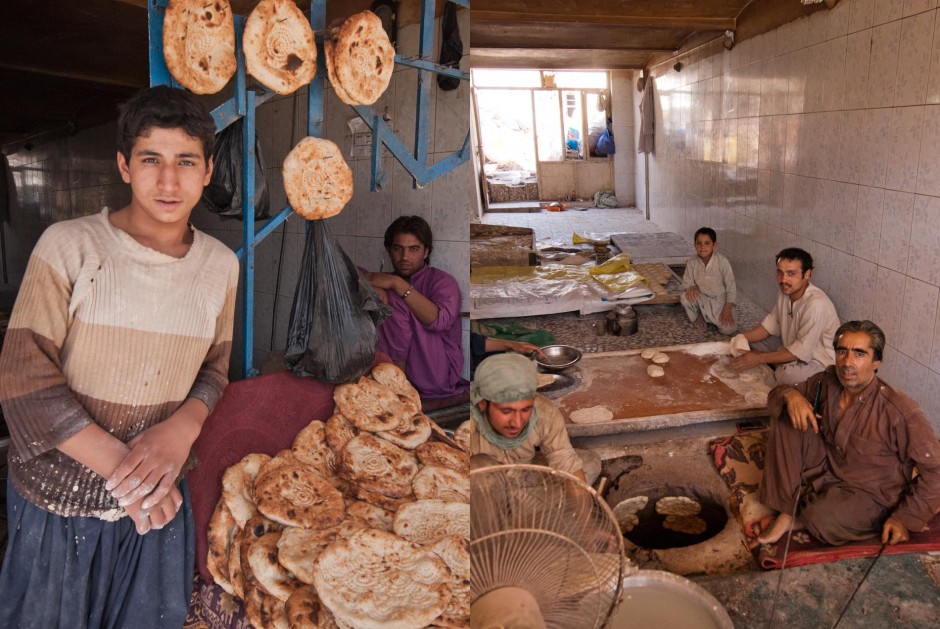 Herat breadmakers' hard at work in the shop before their evening smoke. Located between the Hotel Jaam and the Friday Mosque, Herat's favorite sons will offer you a two-for-one deal on flat bread and hits by the dozen from the fattest fatties I've seen anywhere in Afghanistan. Photos by Daniel C. Britt. 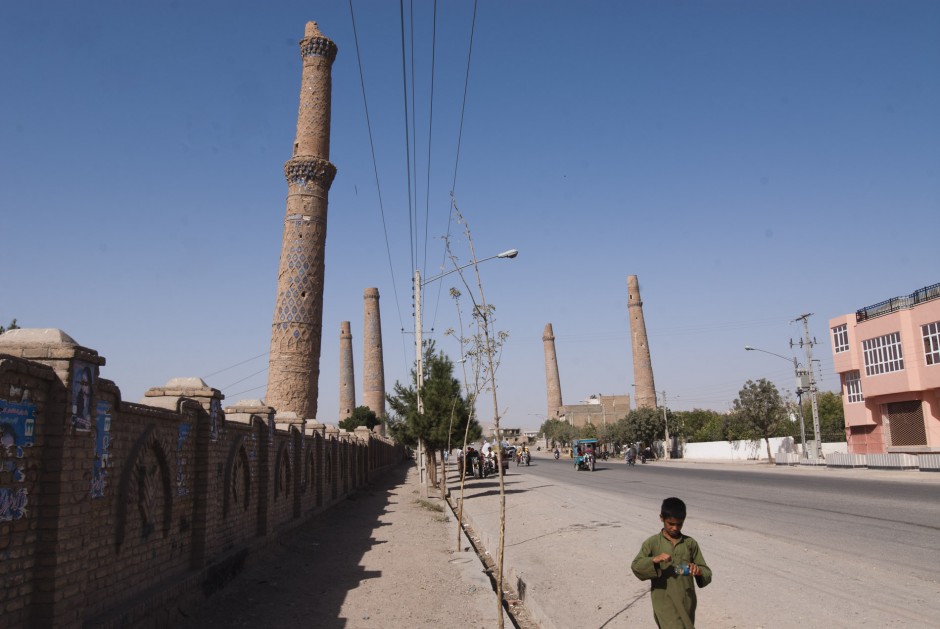 A boy walks the street that runs between Herat's Five Minarets. Of the 12 original towers, five remain thanks to UNESCO's effort to stabilize number five, the closest in the photo, in 2003. The other seven were destroyed as a result of the Soviet invasion. Photos by Daniel C. Britt. 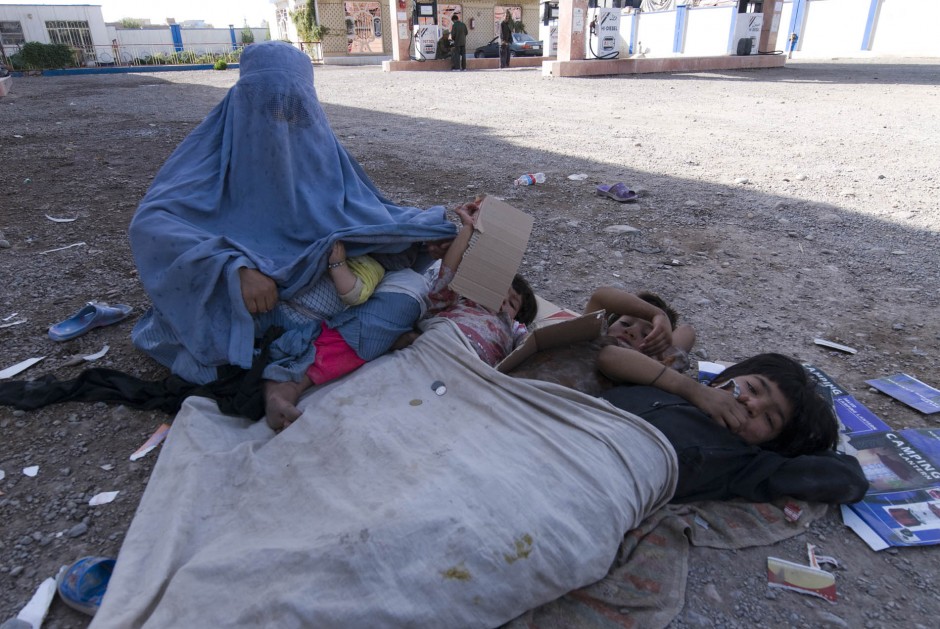 Panhandlers in Herat often beg with children nearby. Don't forget that giving alms, Zakat, is the fourth pillar of Islam. Photos by Daniel C. Britt. 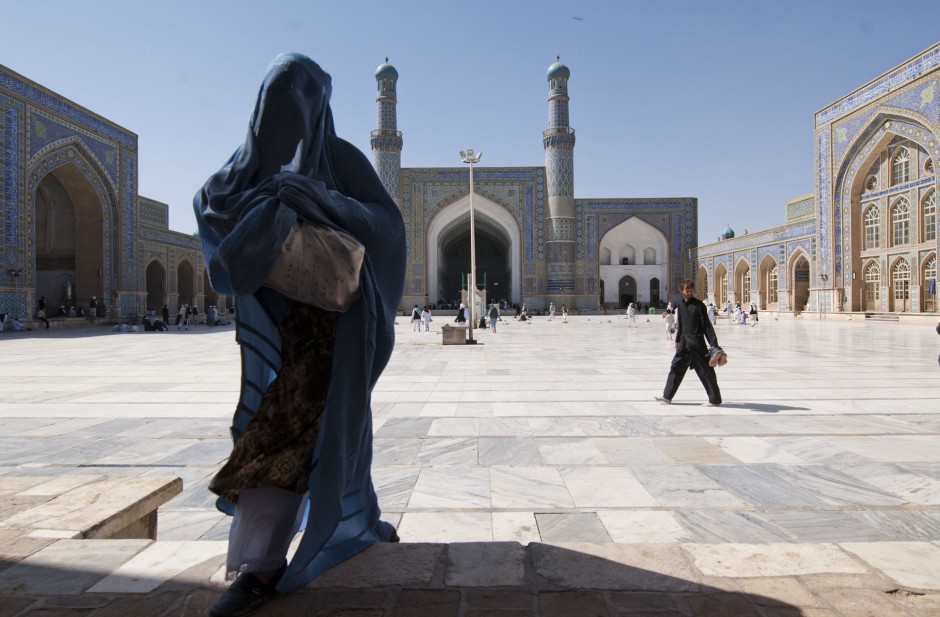 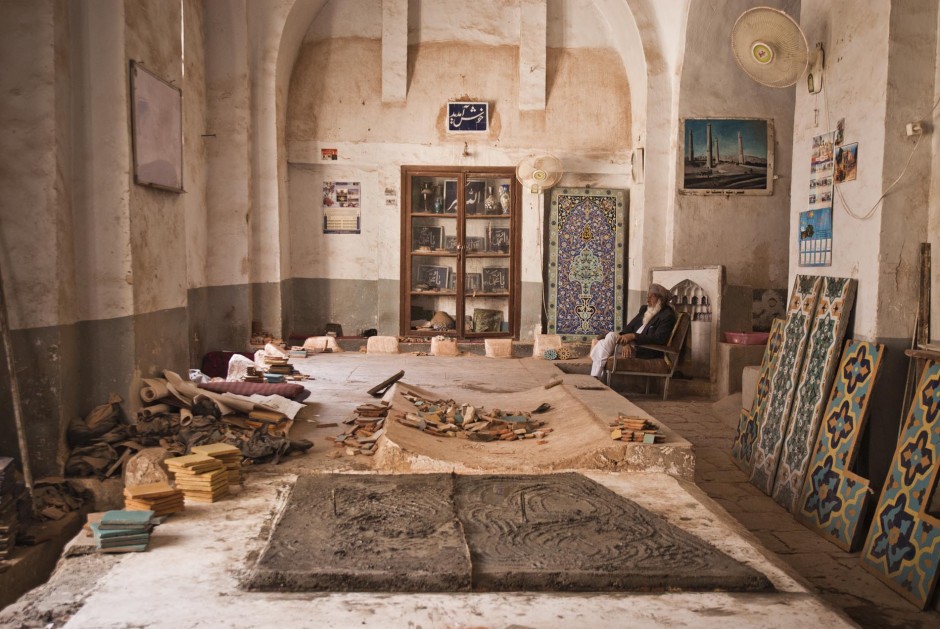 A man sits in a room undergoing reconstruction in Herat's Friday Mosque. The retiling is a custom job. The tiles, mortar and glass are handmade on site and the labor is homegrown. The process is open to the public most days. Photos by Daniel C. Britt. 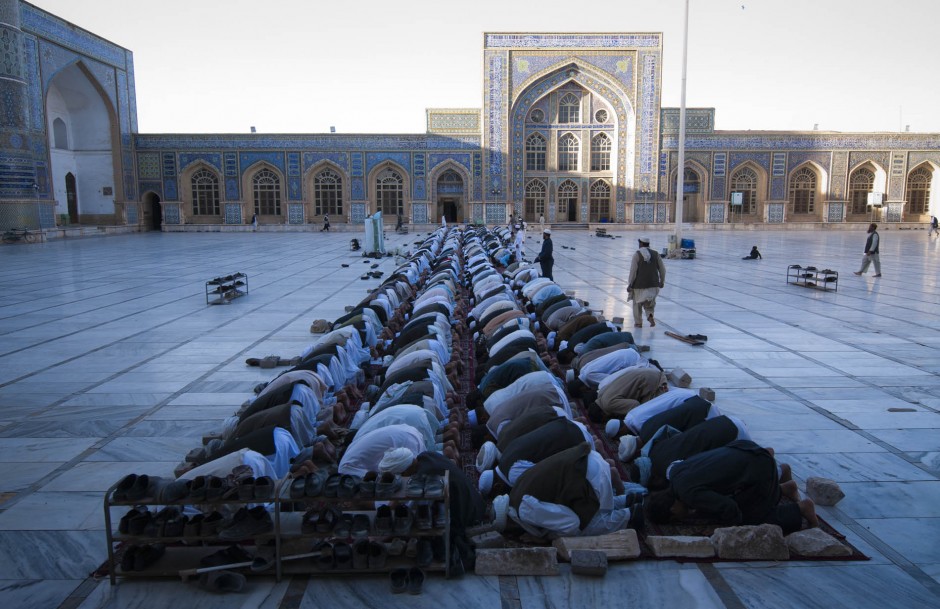 Hundreds gather for prayer at the Friday Mosque in Herat. The best way to experience prayer is to walk in, remove your shoes, mind your manners and pray. Looking for permission from overseers will only become an obstacle. Photos by Daniel C. Britt. 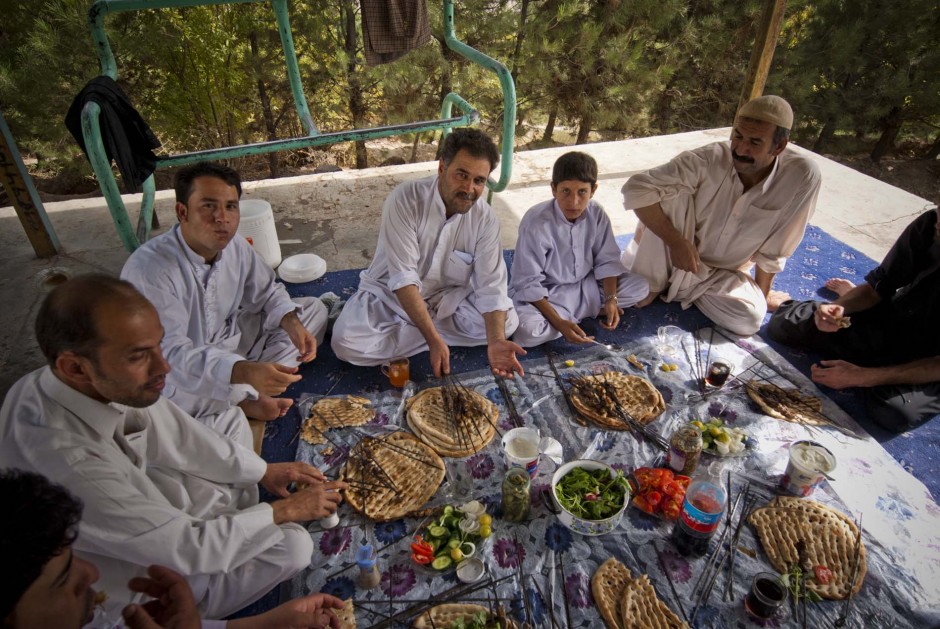 Afghan men picnic at a Herat park, attempting to convert their guest, me. Proselytizing is big in Afghanistan. Relax and take it in. It's an easy way to open up conversation and get invited to lunch and intelligently choose new bffs. The next best thing to talk about is professional wrestling. In particular, John Cena. John Cena is universally adored by men of all ages, of all ethnic groups in Afghanistan. Afghans who have never seen him wrestle on television have heard of his exploits, can mimic his voice, facial expressions and his top-heavy posture. I believe John Cena could unite the quarellous tribes if his WWE values speech could be delivered in Pashtu and Dari. Photos by Daniel C. Britt. 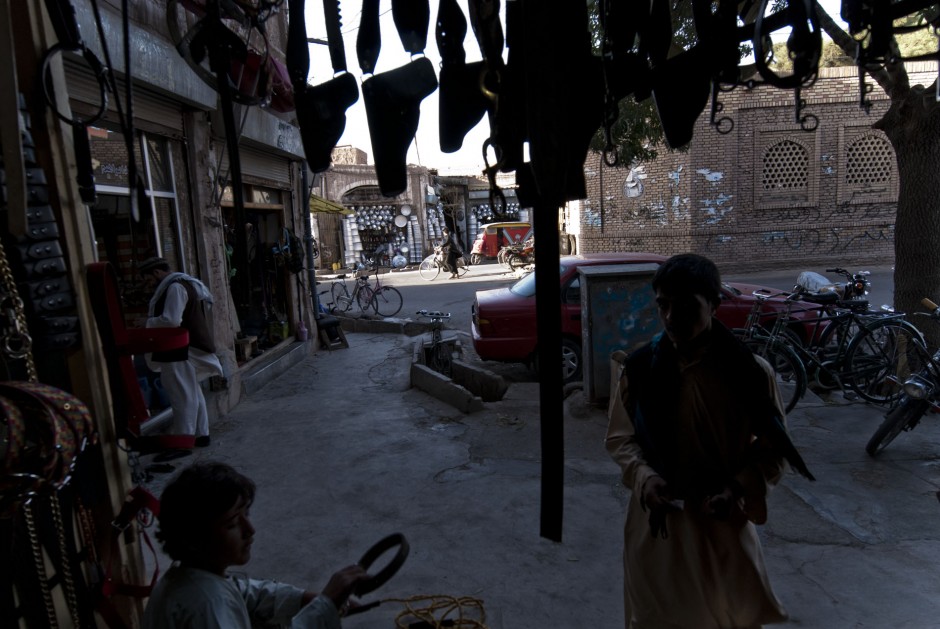 A boy negotiates the cost of a leather collar with a Herat leather-worker. Get a custom holster decorated with Afghan iconography for under 20 dollars at this little shop behind the Friday Mosque. Photos by Daniel C. Britt. 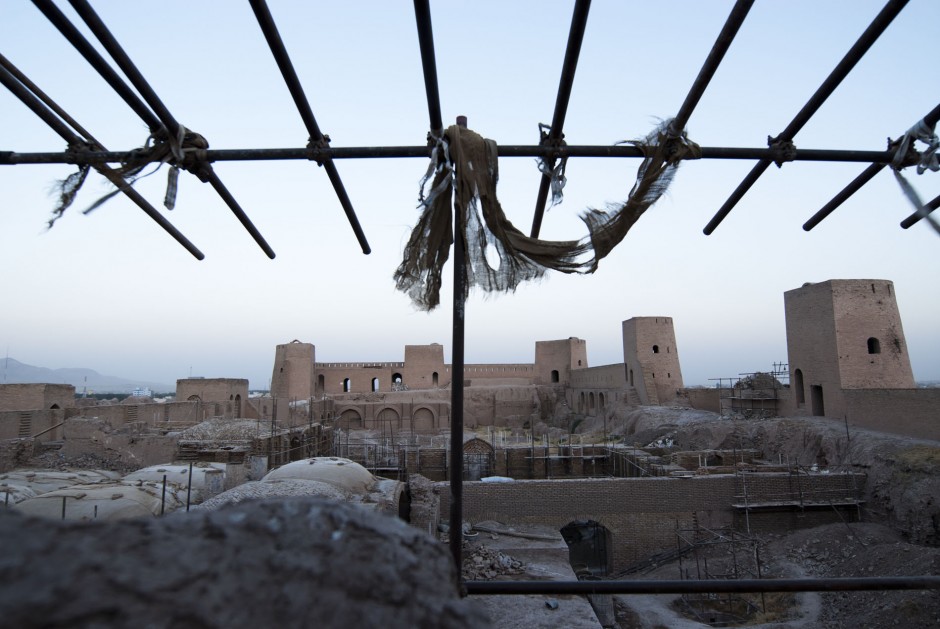 The oldest building in Herat, the citadel grew out of a fort built by Alexander The Great in 330 b.c. It was used as a military barracks and prison until its restoration began in 2005. It's 10 dollars for a ticket but you're free to run amok through it's narrow passageways and all 18 towers. Photos by Daniel C. Britt. 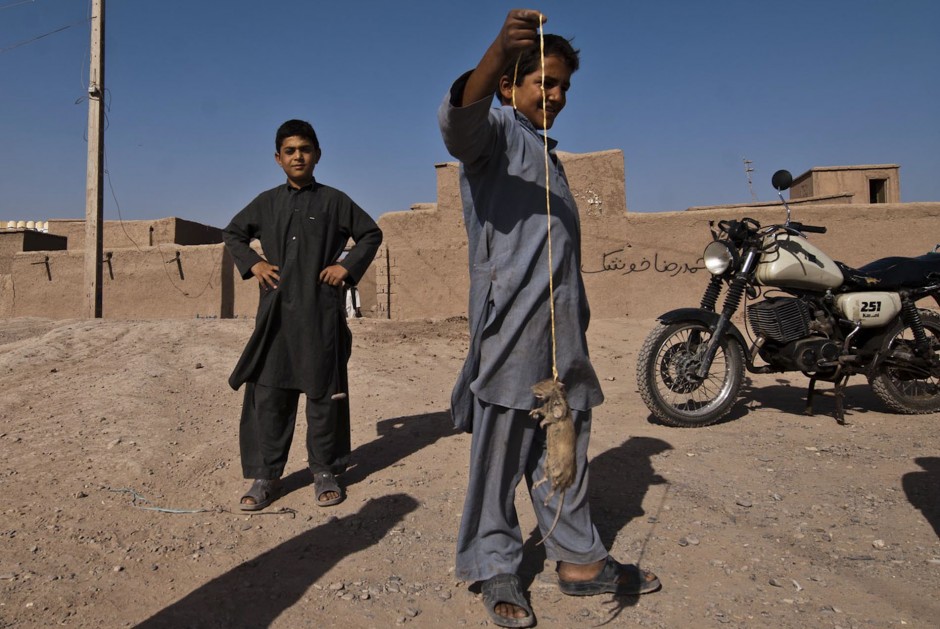 Rat on a String

Herat boys play with a dead rat tied to a string. It was a little off-putting until we got to a Jalalabad gas station where I saw a guy with a dead puppy on a string. Now the rat's hilarious. Photos by Daniel C. Britt. 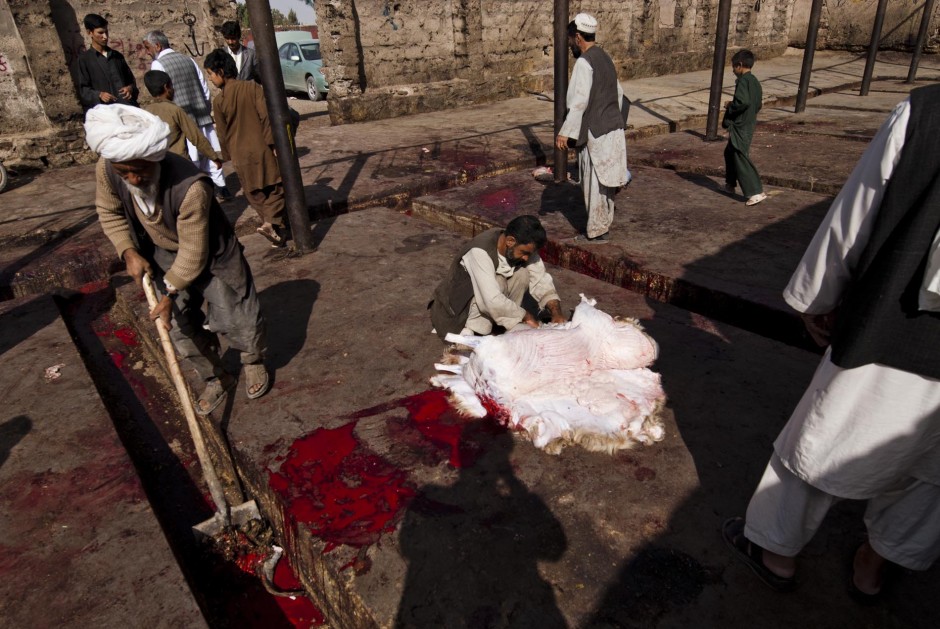 A man cleans a sheep at the gahnj, Herat's animal-slaughtering structure. It's a long, early-morning cab ride to the gange to catch the shepherd's market outside. It's also a dangerous spot to sightsee. Our interpreter, Turyalai, ran off after he overheard a group talk about "kidnapping the foreigners." Photos by Daniel C. Britt. 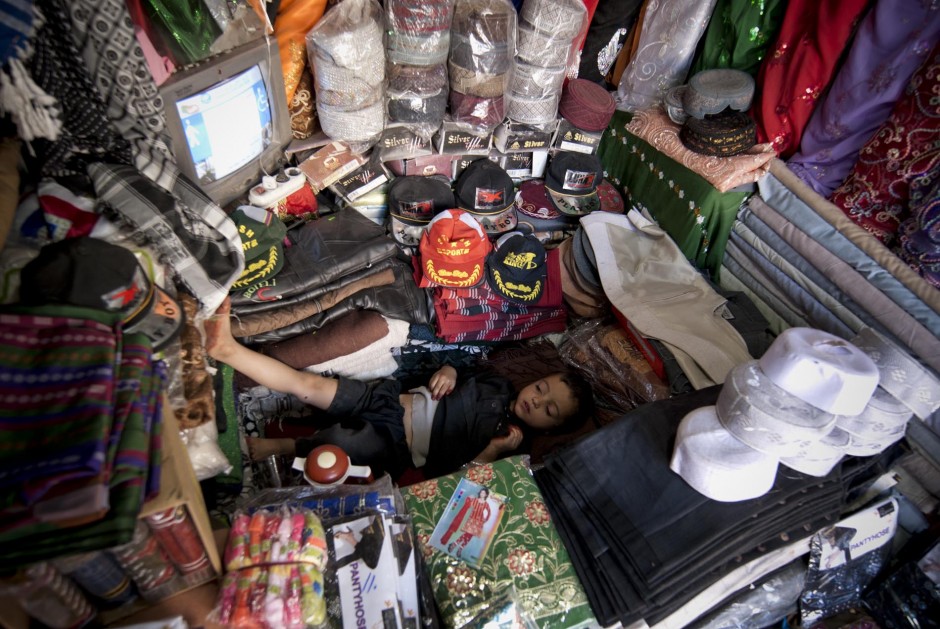 A child naps in his father's Herat clothing store behind the Friday Mosque. Afghan clothes in Herat are half the price of clothes in Kabul. Traditional Herati chest embroidery, a mark of the region, is also the better looking. If western dress is what you're looking for, most shops also offer a variety of trucker caps and faux-leather bomber jackets. Photos by Daniel C. Britt.