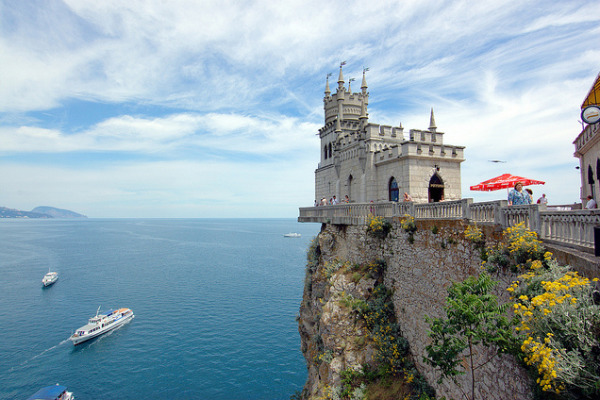 Even though she visited during childhood, Gina Gorelik is still surprised by what she learns about life and travel in Crimea.

BORN AND RAISED IN Ukraine, my family vacationed on the Black Sea coast almost every summer. The last time I was in Crimea with my family I was 13; I remembered it vaguely, but when I went back as an adult it felt as if not much had changed in the last twenty years.

The fashion is reminiscent of the 1980s. Socialist Era buses are still in operation, and sunflower seeds are still very much en vogue. On my return trip, some days I felt I was a part of it all, and other days I felt like a total outsider looking in. A few things, however, caused a mild culture shock or put a smile on my face.

The first time this happened to me, I thought it was a fluke – a creative cashier with imaginative methods of change disbursement. I found it adorable, but later realized that this is a common occurrence.

The Ukrainian currency is hrivna, and each hrivna is broken down into kopeikas. If a purchase requires the cashier to give you change with kopeikas, and he doesn’t have any, you’ll get a few hard candies out of a little jar kept near the register.

I never ended up figuring out exactly how much one hard candy is worth, as the “change” always varied. A few times, I even got lollipops.

2. The Last Page of a Restaurant Menu is a Price List – In Case You Break Something

Apparently it’s a common thing for people to dine, have too much to drink and stat breaking things. Crimea restaurants have taken precautions.

The first place noticed this list was an upscale, waterfront restaurant. The menu listed prices for plates, ashtrays and glassware. The next establishment I visited had all of the above, plus prices for tables, chairs, and the music equipment; the stage was also included.

One restaurant even had the price one would have to pay if he destroyed the restaurant in its entirety. Destroying an entire restaurant sounds like no small feat, and I am not quite sure how that is achievable, but I’m guessing the restaurant owners had reasons for their concern. 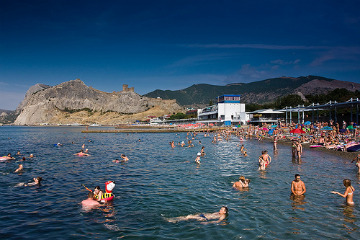 3. Surprising Items Are Sold at the Beach

In Crimea the most common things sold on the beach are ice cream, corn on the cob, and sliced watermelon. Local women also sell homemade pastries and pirozhki, dumplings stuffed with meat, potatoes or cherries.

But in addition to the expected beach goodies like food, sunglasses and floating devices, people sell toilet paper, calling cards, soap, move tickets…and (gasp!) condoms! Why anyone would need these particular items while on the beach is a bit beyond me, but it’s nice to know they are readily available.

4. Expect a Sea of Speedos

If you’re a male and want to fit in on Crimea beaches, you’d do best to invest in a Speedo. Don’t worry if you don’t have a six-pack, or if you’ve never been to the gym; there are no age or weight restrictions on Speedo-wearing in Crimea. In fact, I don’t think I have seen one single pair of swim trunks in Crimea, neither in a store, nor on an individual.

Ladies, if you wear a skimpy bikini, chances are you’ll be the odd one out. The females basking in the sun by the Black Sea wear more conservative beach attire. I would describe the suits as “Marilyn Monroe-sexy”; G-string they are not.

Since I now live in Miami, this was a particularly interesting phenomenon to observe. On Miami beaches the swim fashion is completely the opposite; less is more for girls, and vice versa for boys.

5. Some Rules Are Meant to Be Broken

On certain bus routes in the Crimean mountains, a rule exists that every bus passenger must have a seat. If all the tickets for the ride are purchased and the seats are full, you won’t be able to get on the bus at the station. However, bus drivers often stop to pick up hitchhikers along the way.

While on a bus between Santa Barbara and Yalta, I observed the driver as he stopped for some hitchhikers. Before letting the hitchhikers board the bus, he yelled at them. “You are not supposed to be hitchhiking here! This is dangerous! I can get in a lot of trouble for picking you up!”

Yet he stopped at least five times on the way to the highway and charged everyone he picked up a small fee that he put in his pocket. I took the bus to the train station some days later with a young female driver, and she did the same exact thing.

***
I spent three weeks in Crimea – traveling across most of the country and visiting at least a dozen places – and never once encountered a foreigner. I wondered why more international travelers don’t check out this corner of the world where the change is given in candy.