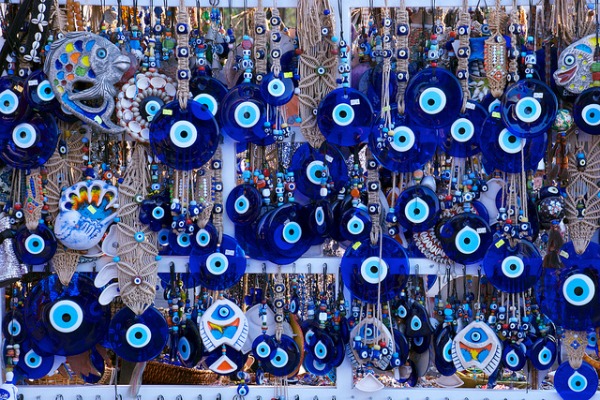 Matador Nights co-editor Kristin Conard worked at a hostel in Saranda, Albania, right on the coast with a view of Corfu. But it isn’t the turquoise sea or the cows wandering amidst the houses that she can’t stop thinking about.

“WHY ARE THERE TEDDY bears nailed to all of the houses?” I ask Jolanda, the woman at the tourist office in Saranda.

“They are on the abandoned houses or the unfinished ones for good luck,” she says matter-of-factly, as though this should be common knowledge. I suppose to anyone who lives there it is, but I am still confused.

She amends the purely positive view of luck to, “for protection.” She is again satisfied that she has fully explained the situation. “From what?” I persist. With great patience, she goes on. “From evil spirits. You see,” she seems to have caught on to my complete ignorance, adding “It protects from misfortune, from evil spirits, from the evil eye.” We went from luck to evil in just under a minute.

While waiting for the bus in nearby Butrint a few days earlier, my friend and I were approached by a young kid selling bracelets that his mother had made. Many featured the classic evil eye charm – a blue eye set in a blue background. I asked him, “What is it? What is the evil eye?” 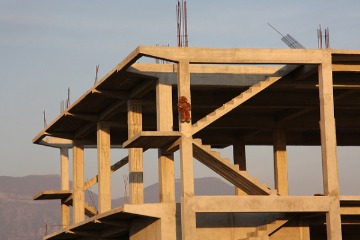 “The eye,” he said, pointing to his own, “People give the eye, and this will stop it.”

“The evil from the eye.”

The explanation seemed maddeningly circular. I hoped that Jolanda, with her wonderful English (as I know no Albanian) would be able to explain it better.

“It’s called syri i keq in Albanian, and someone can see you and your nice things and wish bad upon you. Say I have a friend who sees my nice shirt,” she pulls at the cotton of her white button down blouse. “They see how nice it is and they are angry or jealous, and so they wish bad upon me. They curse me and give me the evil eye. So in a few days or weeks, my shirt starts to get holes and turn into rags. And so I am ruined.”

“But how do they give it?” I have visions of witch doctors and shamans, chanting incantations.

She shrugs. “It is a curse that you can give with your eyes.”

“So how do the bears help?”

“They confuse the evil spirits who cannot come into the house if there is someone there. The spirits will be chased away by what they think is a human, and the house will be protected.”

It’s the same with the garlic that adorns the doors of nearly all of the restaurants that I visited in Saranda. I thought it was for decoration, as I first went to an Italian restaurant, but no, the garlic was everywhere. I’d known that garlic could ward off vampires, but in Albania its magical powers also include negating the powers of the ubiquitous evil eye. Apparently you can carry a clove of garlic with you on your person for protection, but the smell isn’t one that you’d like to carry around with you, so instead there is the evil eye charm or talisman to be kept with you at all times. There are hundreds of evil eye charms and talismans for sale at the shops in Saranda. 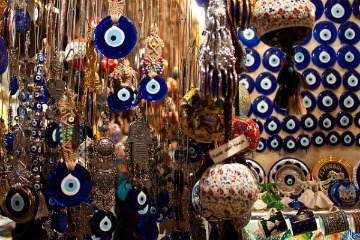 It’s a practice that has recently come back into fashion in Albania. While the tradition itself is thought to have roots in centuries-old folklore, its reemergence connects to the post-Communism culture where there is a large gap between those who have and those who have not and that there is now much more, materialistically, to envy.*

“Should I get one?” I ask Jolanda, “Does everyone need one?”

“Those who believe will have one. I don’t believe, but I have one.”

This seems counterintuitive, but I let it go. “What happens if you lose it?”

She ponders this for a second. “Well, you don’t lose it. But if it breaks, it means that it has absorbed all the evil energy that it can. I’ve had two of mine that have broken, right down the middle. So I guess I’ve had the evil eye come my way!” She laughs as she says this, seemingly unconcerned by this sign of a curse. She reaches into her bag. “Here, I don’t believe. Do you want mine?”

I shake I my head; I couldn’t take this woman’s talisman from her. Belief or not, it was hers, and I didn’t want her to part with it, especially since she’d already had two break on her.

Having blue eyes myself, I learned I should have exceptional skill at giving the evil eye. I needed to be careful of giving compliments as they might be construed as curses; I could be calling upon the evil eye to strike down whomever I was complimenting.

Giving the evil eye is not without its consequences though. It’s believed that whoever gives the evil eye to someone else will get the evil back on them 1000 fold. That doesn’t quite seem worth it to me, but anger and jealousy are powerful emotions. The tradition has been around for thousands of years. Would people still tack teddy bears to their houses and carry the blue charms if they weren’t useful? Or is the use in the belief itself what’s useful?

I’m quite sure if I do or don’t believe in the power of the evil eye, but that doesn’t stop me from picking up a charm of my own to carry in my pocket as I travel through the Balkans. It can’t hurt…

*According to John M. Roberts’ theory as detailed in Kristin Peterson-Bidoshi’s article “The Dordolec: Albanian House Dolls and the Evil Eye” published in the Journal of American Folklore, 2006.

Have you run into the evil eye or a similar tradition in your travels? How do beliefs about the power of the evil eye manifest in different cultures?

Tagged
Culture Narrative Albania
What did you think of this story?
Meh
Good
Awesome

How to spend a mystifying week in Albania

Screenplay for an Albanian minibus ride