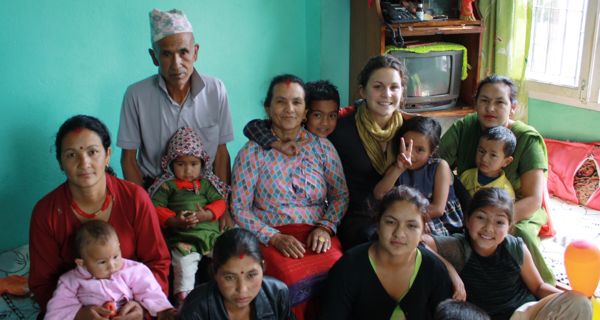 The author and her Nepali host family at home in Kathmandu. All photos courtesy Sarah Vazquez.

Travel reveals many unknown qualities about ourselves, including the reserve of xenophobia that we carry around in our backpacks.

Being a minority is one of the most valuable experiences of travel. The sensitivity and awareness we learn from the minority perspective is important to bettering ourselves as global citizens. This is especially true for citizens of the United States.

Our country’s makeup includes many types of people and heritages. To say that there is one, streamlined “American Identity” is simply impossible.

From the earliest days of Manifest Destiny and mass immigration to our current times of hostile neighbor relationships (inside and outside our borders) and unprecedented presidential elections, the story of the American Minority has always been highly relevant. 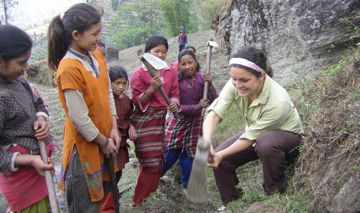 My digging skills under review.

By definition, all Americans are travelers and foreigners.

Connecting with the experience of being a foreigner in a global context is really to relate back to the innate immigrant thread that all Americans share.

Amazingly, our common experience as immigrants does not fracture us into categories, regions and races, but rather weaves through our differences and ties us together as one nation.

Whether or not your (great-great-great-great) grandmother’s house was next to Plymouth Rock, or your family just moved to Queens five years ago, we can all learn what it feels like to be “the only one” in a room by adopting the minority perspective and remembering what the experience of immigration was like for our ancestors.

Maybe you are like many Americans and have ancestry rooted beyond the red, white and blue of our nation, but have simply not yet connected with your heritage. Sadly, many efforts towards assimilation and shared identity have meant losing our own distinctive histories and cultural traditions. 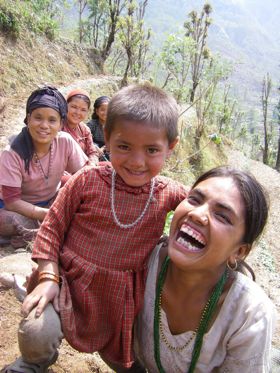 Personally, I have experienced much of this internal bi-racial contradiction.

My father is from Mexico, yet for many reasons, I have been raised more or less in a completely “American culture”.

Of course, there is no right or wrong type of heritage, and I’m thankful for the unconditional love and patience my family has given me.

However, in my mind, for better or for worse, “American culture” has sometimes meant a focus on the future at the expense of my heritage.

When I was in Nepal a wave of liberating realizations hit me, subtly and powerfully, over the course of my three months as an oddball foreigner.

In addition, I was often culturally inept. I stepped in the wrong place, I ate the wrong way and I showered poorly.

I was a person I had never been at home in America.

I was a distinct minority. 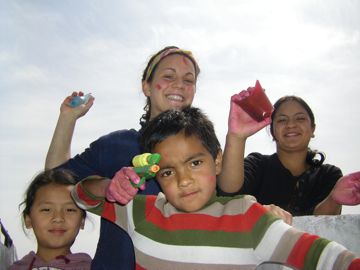 Celebrating Holi, the Festival of Colors.

I tried to take my failures at cultural assimilation lightly.

I learned humility, and many of my pre-conceived notions of “what’s proper” soon disappeared as I watched the everyday tasks accomplished in a new way.

I began to lift my head and look around outside of myself. It occurred to me that the Nepali ways were not foreign. The only thing foreign was myself.

Relating to my Father

Perhaps I could now relate to how my own father, along with many other young immigrants, felt in his first years in America.

My father and I had never connected on this type of level before, because we had always focused on our commonalities, namely our recent past together and the future ahead of us.

Although we still don’t talk much about this now, I feel (and hope) that my new-found sensitivity to the minority perspective has spoken louder than my words ever could. 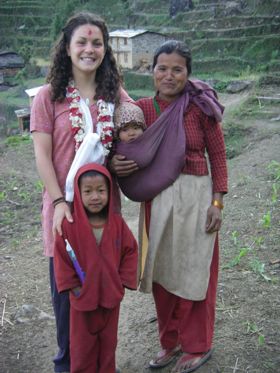 The Lessons of Being Different

Perhaps one of the most useful things I learned in Nepal was how to treat foreignness as a gift.

I began to take solace in the fact that I was learning what it meant to be “the only one” in the room.

Often times over the course of history, Americans have rejected foreignness in favor of conformity. In Nepal, thousands of miles away from home, I learned that everyone is a foreigner somewhere. We are all foreigners because we are all unique.

We all have differences, and so our position of being different turns into a shared experience.

Most Nepali’s seemed to dismiss the idea that I was “wrong” when I misspoke or made a cultural misstep. They just accepted, with enthusiasm, the fact that I was “different.”

I got laughed at. A lot. By many people.

It took me a while to get used to being in the social spotlight all the time, but the humor of my Nepali hosts was not malicious or antagonistic.

My host-family and their friends laughed simply because my differences amused them. It made me happy to see that I could make people smile simply by being myself and by doing some things my own way. 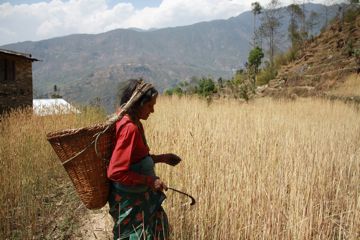 Working in the wheat field.

I treaded these cultural waters with trepidation at first, expecting to be chastised when I stepped incorrectly. Instead, I was respectfully guided in the more culturally acceptable direction.

Perhaps more amazingly, I was never corrected for the sake of retaliation or enforced conformity. Instead, I was always corrected so that I could become a better Nepali and improve my own experience.

I returned to America with a strong belief in the importance of respect and understanding within the global community. We must all be responsible, compassionate global neighbors.

But I also returned with a vision of what it means to be an American today. Our nation’s backbone lies in our shared experience of the minority perspective. Our differences help make us strong.

What do you think about the minority perspective?

Please join the conversation by leaving a comment below.