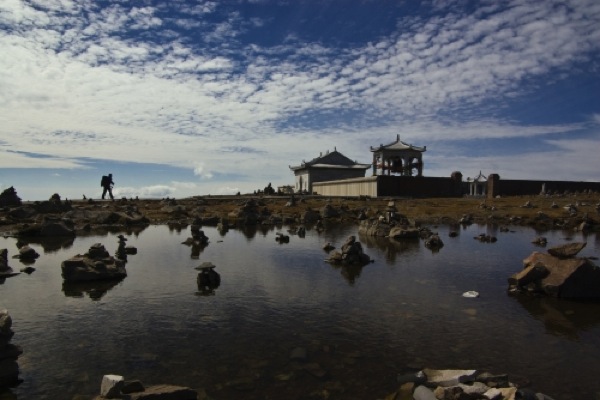 The unexpected complications of traveling back to the motherland.

“Do you consider yourself Chinese or American?” the Chinese man sitting across from me on the plane asked in Mandarin.

“American,” I answered after a short pause. Having been born and raised in the United States, I believed it to be the only appropriate response.

He groaned. “You should say you’re Chinese,” he replied. “And it seems like you don’t speak Chinese very well, either.” He sighed. “That’s what always happens to our people when they go abroad. They become foreigners.”

The man’s words stung me as I was heading to China for the very first time. Growing up, I had always been aware of my dual identity. I spoke English at school and Cantonese at home, and attended Chinese school to develop my reading and writing skills.

I loved shrimp dumplings and rice noodles as much as mac and cheese and pizza. And although my family did not speak Mandarin, the official language of the People’s Republic of China, my parents signed me up for classes, adding to the Spanish instruction I received in my regular school. 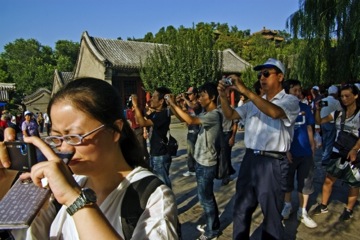 Yet it was clear from this encounter that because I grew up across the ocean from the motherland, in an environment that was predominantly non-Chinese, the cultural influences that had shaped me were largely American, a fact that this man did not appreciate. I soon realized that despite sharing the heritage of the inhabitants of this country, I was an outsider.

I was extremely disconcerted to get such reception from a native Chinese. Having spent my entire life as a racial minority in the United States, I had looked forward to being in a country in which I could blend in. I’d figured that my ethnic ties, as well as a familiarity with the language, would give me an advantage over tourists without that connection to the country.

But throughout the trip, I still found myself struggling to communicate in Mandarin, which I’d studied as a foreign language just as I had with Spanish. My family and I were sometimes charged foreigner prices because we were overseas Chinese. And each of the locales we visited were thousands of miles from the home villages of our ancestors, making them seem as exotic as Malawi or India. What I had envisioned as a heritage trip felt like anything but a homecoming.

Motherland travel can sometimes be more challenging than visiting a country in which you are an obvious foreigner. You’re expected to speak the language with the same command as a native and possess the same cultural proclivities, as if you have spent your entire life in that country.

But when your foreignness is obvious, the locals are often sensitive to your foreign ways, respecting any cultural differences and linguistic shortcomings. This seemed to be the case when I studied abroad in Spain and France, where I did not have any clear ancestral ties. My Spanish senora and her husband were patient with my roommates and me as we developed our Spanish skills, and understood that we were not accustomed to eating dinner after 8 pm. There was a mutual awareness of the cultural gaps that existed between us, and on each side, we did our best to accommodate for them. 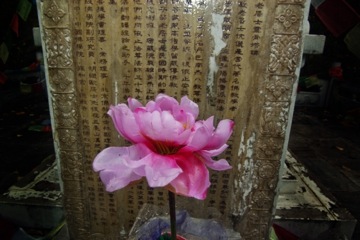 My situation in China was not unique. A friend of mine who has spent extensive time in Mexico recalled that Mexicans would sometimes look down upon her Mexican-American friends for their imperfect Spanish and for having forgotten their culture, but were appreciative of the fact that she, a pale-skinned American, spoke their language at all and showed interest in their country.

Matador Trips editor Hal Amen also recalled that when lived in South Korea, Koreans would often become upset that his Korean-American friends, who were often assumed to be natives, did not speak the language fluently and were not familiar with the culture.

In contrast, Hal found that the locals were “thrilled” when he could dig into his basic Korean vocabulary, and that they would make an effort to start conversations in English and make foreigners like himself feel welcome in the country. He attributed this reception to the fact that South Korea does not receive many foreign travelers and to the Koreans’ fascination with the West, with the English language in particular.

Thinking more about my experience, I realized a few things about China. When I first visited in 1998, its society was still fairly insular, having emerged only in the 1970s from a decades-long isolation from international engagement. It still would have been difficult for many people to understand why someone who was supposedly Chinese did not speak their language fluently and thought of herself to be of a nationality other than their own.

They probably found it an insult that I rejected their country and culture, in which they had such fierce pride, and adopted that of a foreign nation. A similar logic can be applied to countries like Mexico and South Korea. My situation was further complicated by the fact that my parents grew up in Hong Kong when it was still a colony of the United Kingdom, and where Mandarin, China’s national language, was not spoken.

After a second family visit to China in 2000, I avoided traveling to China. I studied abroad in London, Madrid, and Paris, where I would be free from misgivings about being out of touch with my cultural identity. In Europe, I could be just another foreigner learning about new cultures and picking up new vocabulary, whose American ways would not be questioned. I admired famous works of art, discovered new foods, took siestas in the middle of the afternoon, and conversed in languages I did not grow up with.

In all my travels, I’ve always identified the United States as my home, but have been forced to acknowledge that my roots are somewhere in Asia. And while I am proud of the fact that I gained proficiency in Spanish and French during my stint in Europe, I do feel guilty for not having put the same effort into mastering Chinese.

I have yet to return to China, in part because I still lack the fluency in Mandarin that would be expected of me and because of fears that I would be derided as a sellout.

I do plan on returning one day, and when that happens, I’ll have to keep in mind that I might come under greater scrutiny than someone of Western stock, and that any cultural gaffes or deficiencies in language won’t be shrugged off the way they were in Poland or Spain.

But I realize now that I at least deserve to give myself a break, even if the locals will not. I did not make a conscious choice to reject the country, culture, and language of my ancestors. Because I grew up in the United States, it was practically inevitable that English would become my primary language, and that I would become integrated into American life.

Mandarin was essentially my third language, and my classes occurred only weekly, which was inadequate if I wanted to
achieve fluency in a difficult language that requires more years of study than Spanish.

I have never thought of myself as purely Chinese or American, but as Chinese-American. I shouldn’t feel ashamed of the fact that I am more savvy with American culture and speak English, and possibly Spanish and French, better than I speak Mandarin. What matters is that I am aware of my identity and am comfortable with it, and can only hope that native Chinese will respect that.

Tagged
Culture China
What did you think of this story?
Meh
Good
Awesome

China Has Committed To Becoming Carbon Neutral Before 2060

This New Bookstore in China Looks Like a Modern Cathedral