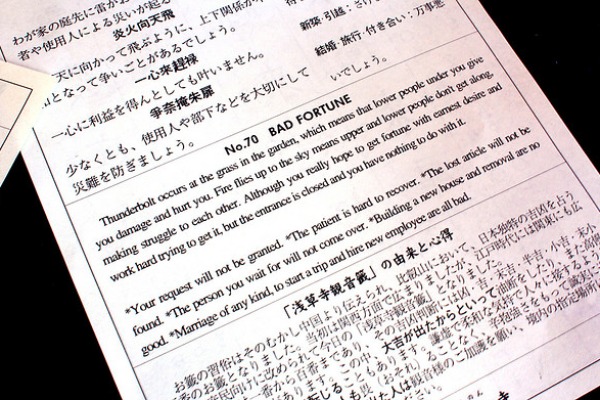 Expat Mary Richardson’s visit with Mr. Furuda does not turn out as expected.

Garfield the Cat greeted me at the door. He was suction-cupped to the glass, and I checked the sign again to be sure I was at the right place.

Yes, this was it. I entered looking for Mr. Furuda, the fortune-teller.

A host urged me to sit down and forced a menu into my hands. Several people sat at other booths. At a nearby table, Mr. Furuda spoke gently to a young girl who was dotting her eyes with a handkerchief.

I browsed the menu, but food seemed irrelevant.

I was at the San Francisco Café to experience an Okinawan pasttime- visiting an urenai. I had my pick of several clairvoyants, human and electronic, within easy walking distance. There was a palm reader around the corner, an arcade where I could get a computerized printout, and a posh establishment called “Mystic Rose” inside a department store. Mr. Furuda had come highly recommended though, and he spoke English. 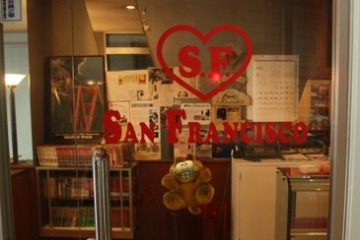 I looked at the other patrons inside the café, and then again at the crying girl.

I wouldn’t cry, would I?

Of course not. I was only there for sheer cultural entertainment, or so I reminded myself.

Then again, years before at the San Diego County Fair, a fortune-teller took my breath away. At that time, I was torn between two loves. One was a long-distance relationship I’d had for years, the other a potential new romance. I’d only had fun in mind when I handed over my $20, but my mouth fell open when the psychic knew my predicament.

Right now in Okinawa, though, I wasn’t looking for guidance about boyfriends. I was looking for a unique afternoon.

But if I had been seeking advice, I rationalized there was a historical precedent for it. From the beginning of time, people have looked to mystics for counseling and remedies. Even now, superstition plays a prominent role around the world. In China, people use fortune-tellers like financial advisors, asking for investing tips. The tradition of “throwing bones” supplements modern medicine and religious beliefs in parts of Africa. And states like Michigan and New York, in the midst of current economic woes, have enacted laws to regulate a burgeoning fortune telling industry.

Waiting for my turn, I realized I was one of many women in the cafe. There were college girls, older matrons, and others in mid-thirties like me. In fact, a steady stream of women poured in.

I wondered if Mr. Furuda recycled a manifestation of the same fortune for all of us. Did he look for crinkles around our eyes and place us into a demographic, guessing at our romantic worries? 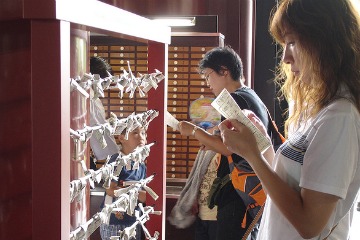 Researchers report that central European women during the late 19th century often turned to fortune-tellers for alternative treatment. Health models at the time were “male-centric” and remote from feminine psychological ailments deriving from women’s narrow social domain. In particular, they sought mystics to inquire whom they should marry, if husbands were faithful, and how to get pregnant.

In present times on the other side of the world, were a 21st century modern woman’s questions the same? Did a need for reassurance about matters of love and relationships transcend generation and culture?

Mr. Furuda sat opposite me and took my hand. Unlike the San Diego psychic who conformed to my gypsy oracle stereotype, Mr. Furuda wore a crisply ironed button up Oxford shirt and trousers, just like an accountant.

He had a comforting face, but I immediately felt self-conscious. Minutes before, I’d observed anxiety, relief, consternation, and repose on other peoples’ faces. Now it was my turn.

“You will have long life,” My Furuda said pointing a neatly filed fingernail at a crease on my palm.

“But the most important thing is…”

He paused carefully and looked into my eyes.

“You have to make a baby next year.”

Walking out of the café, I stepped around a trio of giggling girls. I peered back in through the glass door and saw that Mr. Furuda had already moved on to the next patron.

I was annoyed. Despite my self-talk about not taking it seriously, Mr. Furuda had touched a nerve. As a 35-year old woman, I didn’t need him to impose a reproductive timeline on me. I had Japanese and American society, doctors, and my own mother for that.

Have you ever visited a fortune teller or palm reader while abroad? Share your experiences below.

To learn more about expat life and travel in Japan, check out Matdor’s Japan Focus Page.

Ditching the cubicle to farm in Thailand

33 places to swim in the world’s clearest water

New Year’s Day in the life of an expat in Okinawa, Japan

Shinugu Matsuri: The Festival That Could Change the World