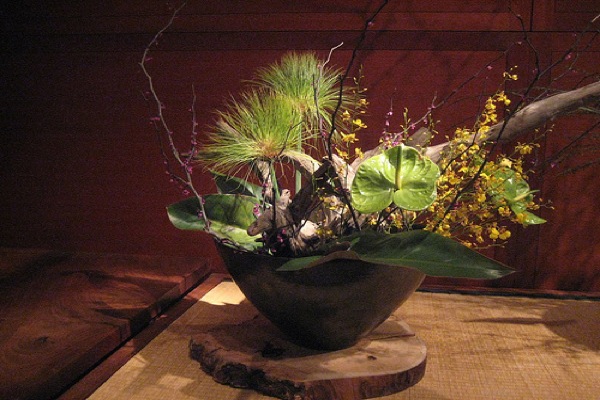 I should have known better than enter an Ikebana show in Japan. After all, I’d only been taking the flower arranging classes for a few months, and there’d been all kinds of nervous chatter in the weeks leading up to the event.

All my conversations with classmates Junko, Ai, and Shoko had followed a typical pattern.

Them: “Mary-san, have you chosen your flowers yet?

Them: “What arrangement are you going to do?”

Me: “I want to be inspired in the moment.”

Them: “Which vase are you using?”

Me: “The same old training one…”

Ikebana is a traditional Japanese art form which has endured for hundreds of years. You’re probably familiar with the distinctive arrangements: rustic branches twisted around a single yellow rose, bamboo stalks situated at precise angles. There’s a whole spiritual philosophy behind it. And just like Klingon language experts and dog show trainers, Ikebana enthusiasts take their craft seriously.

Somewhere in the back of my mind, I knew that. Yet, I just couldn’t bring myself to feel stressed about the show.

I had been living in Okinawa with my husband for the past year. Before the move, I had read that integrating into Japanese culture was deceptively hard. Expat accounts revealed that although locals are pleasant and accommodating, Japanese communication style and social customs are complex and subtle, often proving troublesome to foreigners. For Americans in particular, accustomed to directness, there was danger of failing to “read between the lines.”

Moreover, the Japanese cultural tendency to say “maybe” rather than “no” often led to misunderstandings between the two cultures.

But so far, I hadn’t suffered any of those tensions. In fact, my language lessons, karate classes, and weekly Ikebana helped me make friends quickly and feel right at home on the tiny island.

Yet, oh, how I wish I had paid more attention. 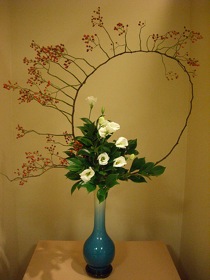 The day of the Ikebana show, I was in high spirits. I was so confident that I spontaneously met a friend for lunch when I should have been focused on flowers. I figured I’d have a quick meal and conversation at a sushi-go-round. Then I’d buy my flowers, drive to the exhibition hall, set up my arrangement, and be done.

Only that’s not how the day unfolded. Lunch ran late, a tropical storm hit, and by the time I arrived like a drowned rat at the florist, there were slim pickings. I quickly grabbed three green swirly branches, five spotty roses, and some spiky pink blossoms. I had never used any of those materials before in any of the lessons, but they would have to do.

When I arrived at the hall, I expected other participants to be as frazzled as I was, what with that mini-typhoon barreling through.

But they were all calmly sweeping the floor underneath their majestic arrangements.

I dispersed my flowers on the floor and unpacked my sheers and training vase, glaringly drab and inferior next to the sleek pottery around me. Scanning the room nervously, I saw that everyone had brought miniature brooms to clean their work space, linens to decorate their spot, flower food, and bottles of water. Water. How could I forget to bring something as important as that?

Noticing my disorganized state, Junko lent me a few of her supplies. Ai spread newspaper underneath my area to collect stray clippings. Shoko sprayed my flowers with fine mist from a water bottle. I hastily set to work on creating my masterpiece.

I didn’t feel good about the final product. Next to all the elegant displays, my flowers looked like they had been attacked by a weed-wacker. That I had produced a shoddy arrangement was confirmed by all the polite encouragement I received.

“Nice colors,” they offered, which in essence is like writing “nice font” on a dismal research paper.

I braced myself for the worst when our 80-year old Ikebana Sensei approached. But after gazing over my arrangement, she surprised me with her response.

“Mary-san, this is very very good.”

“Yes, very very good,” she repeated as Junko, Ai, and Shoko looked on with wan smiles.

I felt instantly relieved. Our sensei was a premier Ikebana expert in Japan, displaying her famous arrangements in national museums and winning prestigious awards. Despite my lack of preparation and experience, I had somehow made her proud.

Sensei moved on to assess other flowers and I beamed. In fact, my confidence soared as I admired my creation. I had a natural knack for this art form after all.

Remembering I needed water, I borrowed a bucket from Junko and went to the bathroom. I walked back into the exhibition hall a few minutes later, and it was then that my heart lurched.

Sensei was standing in front of my spot again.

From a distance behind, I watched her yank out branches and move blossoms around brusquely, completely changing my arrangement. Her head gave a final decisive bob as she clipped a spiky flower and walked away.

In that moment, color spread over my entire face. My mind drifted back to all the hints over the weeks – the innocent questions, the strained smiles and courtly interest. Not only had I failed to read between the lines, I made a fundamental cultural mistake. I had assumed that my participation in the Ikebana show reflected only on me.

How Native Arctic women are taking back the art of Inuit tattoos
30 awesome Japanese idioms we should start using in English
20 of the funniest idioms for people learning English
The largest pyramid in the world isn’t in Egypt. It’s in Mexico.
The 13 most beautiful college campuses in the US