Over the three-day Aboriginal Cultural Festival in Victoria, Canada, I witnessed the great pride of elders as they watched their children and grandchildren dance, drum and sing, celebrating and preserving their rich culture.

We were a mix of Aboriginal people, some in colorful regalia, and non-Aboriginal people that included local mayors, business leaders, and myself. We paddled in sync to the shared traditional territory of the Songheees and Esquimalt Nations to ask for permission to come ashore, a time-honored protocol. It was a historic day, as this had never been done before in the history of Victoria.

Chief Ron Sam of Songhees First Nation welcomed us ashore and stated the significance of the canoe ceremony when he said:

“You know I think it’s important, the acknowledgment, when we’re all in a canoe, pulling in the same direction. You know, I think that’s what we want to achieve on a daily basis.” 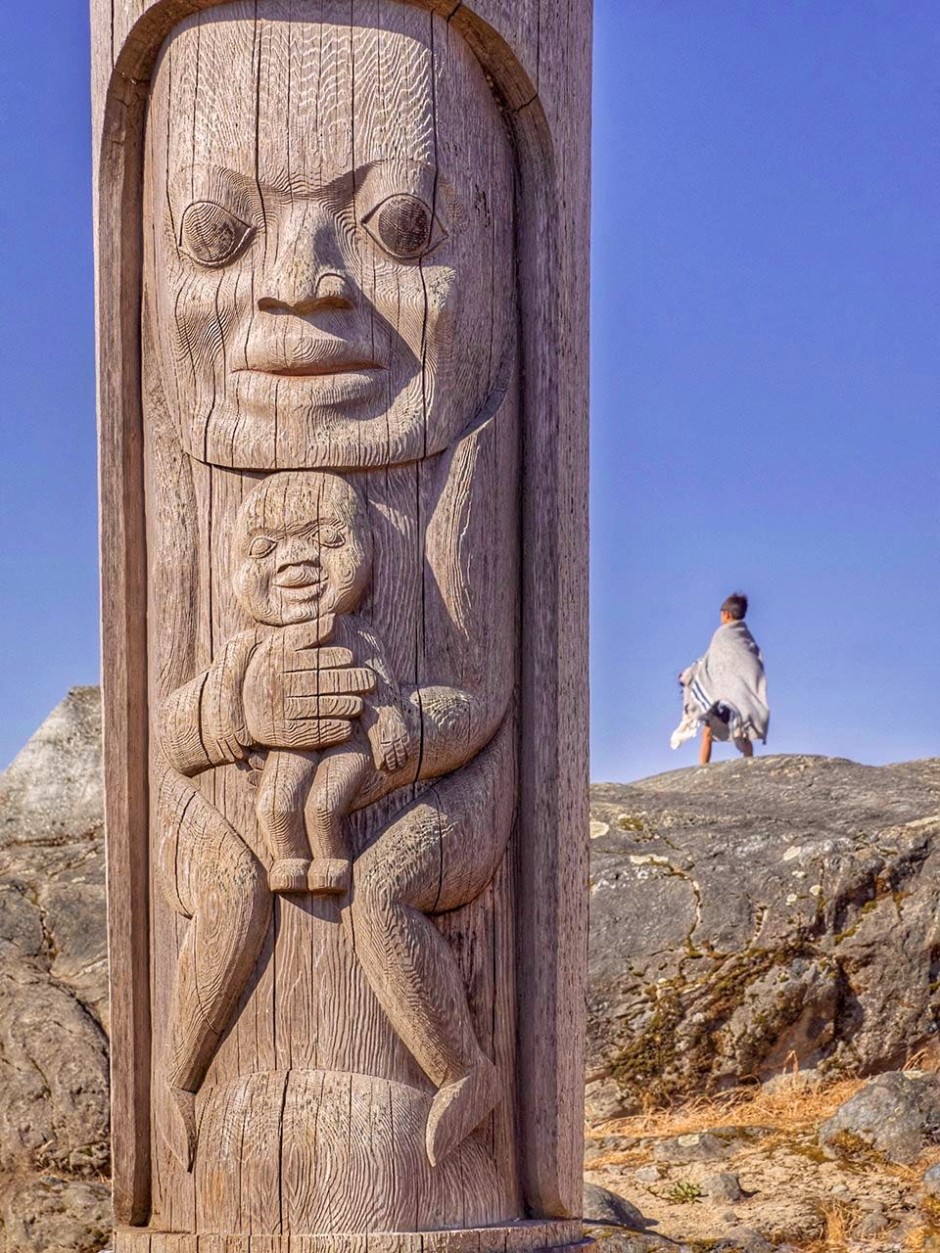 This carving stands on a pole at Songhees Point. It depicts the importance of children and the spirit of this sacred site to the Songhees First Nation. This area is also known as Pallatsis, meaning “place of the cradle” in the Lekwungen language. When children were able to walk on their own, parents put their cradle along the waterfront to ensure them a long life. This was the launch site of 3 canoes that participated in the ‘welcoming of canoes’ ceremony and traditional protocol of approaching a First Nations territory and asking to come ashore. A young boy is seen walking behind this pole to join his father (not pictured) before they departed in the canoes for the ceremony and to open the 2015 Aboriginal Cultural Festival in Victoria, British Columbia. 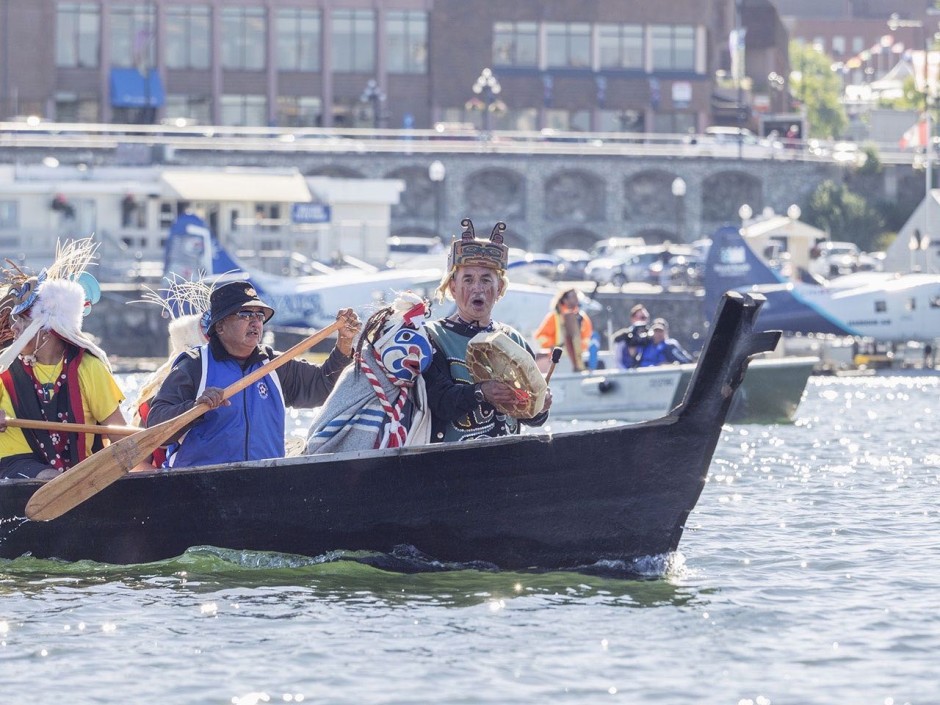 George Taylor, emcee of the Aboriginal Cultural Festival and director of Le-La-La Dancers of Kwakwaka’wakw First Nation sings and drums as he leads a procession of 3 canoes across Victoria’s Inner Harbor in the canoe ceremony. Ten-year-old Matthew Everson seen beside George wearing a ceremonial blanket and mask participates in this historic ceremony. 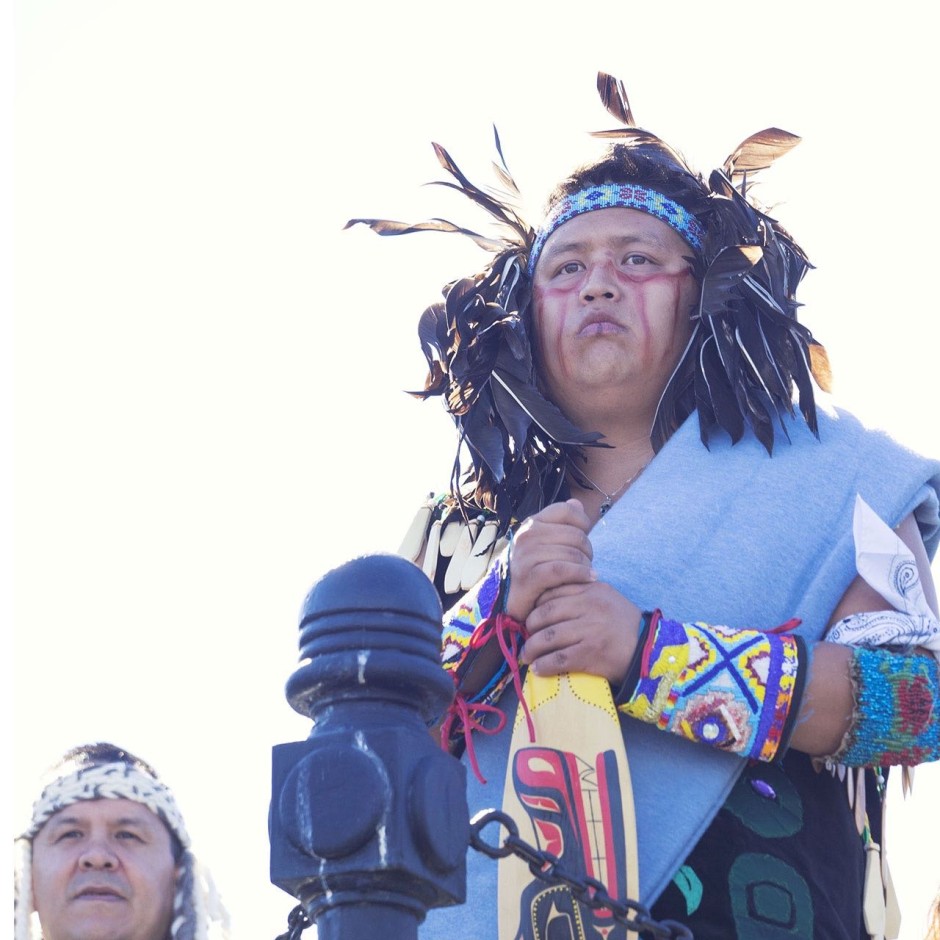 Chief Ron Sam of Songhees First Nation looks on as a youth dancer from the Songhees Nation greets the canoes and then performed a paddle song to welcome us ashore. 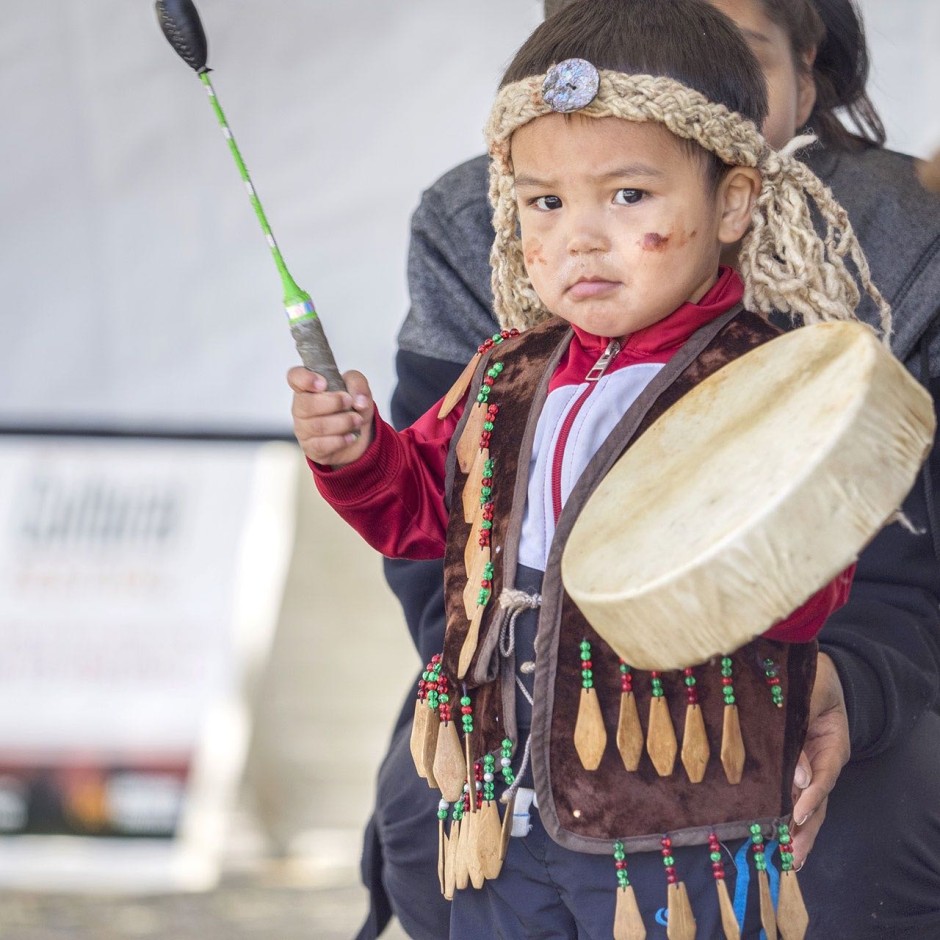 A young drummer from the Esquimalt First Nation joins his grandfather (not pictured) on stage at the 2nd annual Aboriginal Cultural Festival in Victoria, British Columbia. 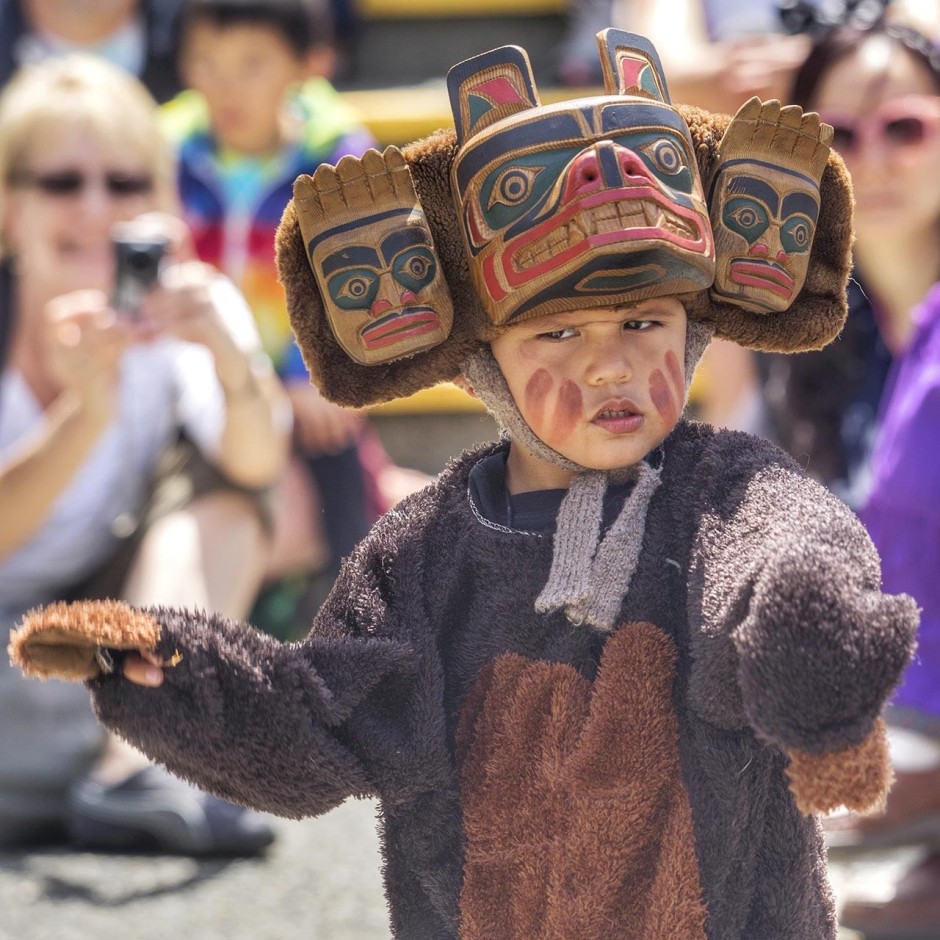 Lason Taylor performs as a young grizzly bear at the Aboriginal Cultural Festival in Victoria, British Columbia. Lason is a 3rd generation member of the Le-La-La Dancers First Nations dance company. The Le-La-La dancers are from the Kwakwaka'wakh First Nation in Northern Vancouver Island. They have been sharing their culture and traditions through song and dance under the direction of George Me'las Taylor locally and around the world for 27 years. It was a joy to watch their performance and to see the pride of Lason's grandfather, George, as he watched him dance. The passing of stories from generation to generation is how their rich culture has survived and will continue to survive. Events like this are important so that we may learn about and celebrate other cultures in our countries and in the places we visit on our travels. 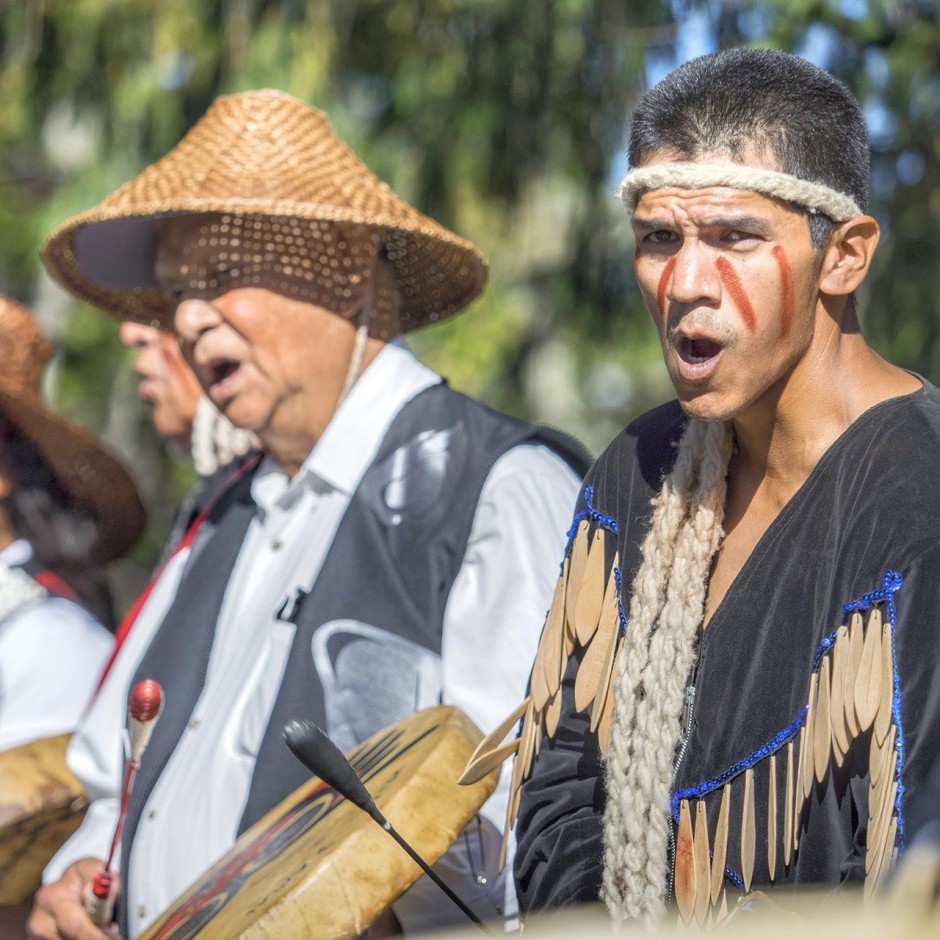 A drummer stands beside elder Ray Qwulshemut Peter, director of the Tzinquaw Dancers group from the Cowichan First Nation, as they sing and drum at the Aboriginal Cultural Festival. This group presented songs and dances that were taught to them by their elders. They shared a song that was sacred to them and asked that no one record or photograph the performance. It was an honor to hear it. Several of the elders that lead dance groups stepped aside and asked the younger generation to sing and drums their songs. George Taylor spoke of the importance of the “passing of the drumstick” and teaching children and youth so that their traditions, songs, dances and stories may be carried on. 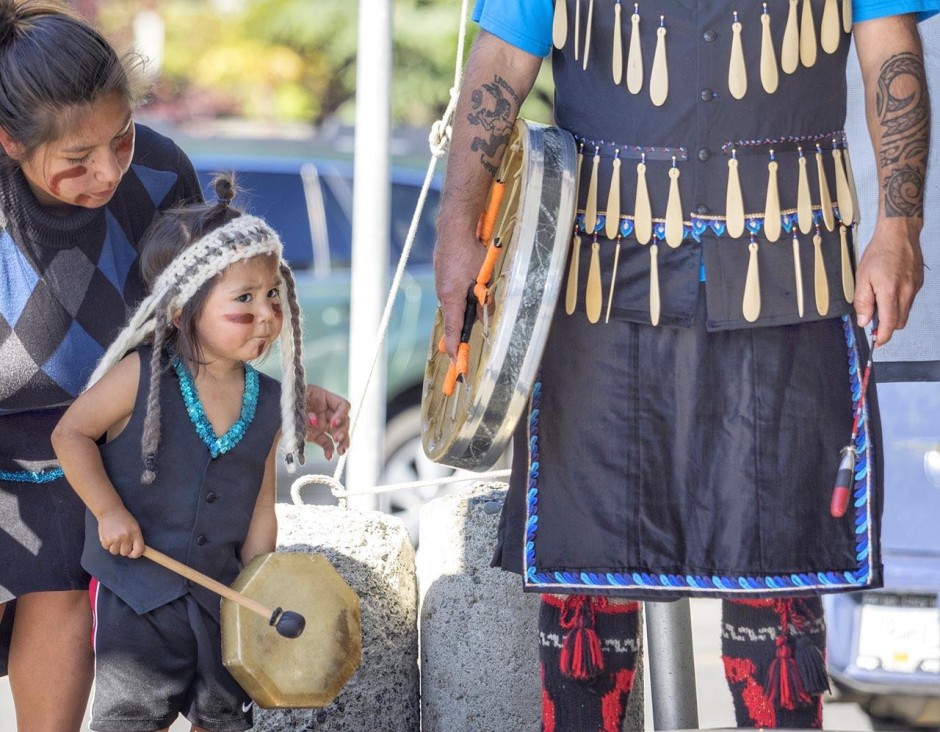 A young boy drums as he performs with the Tzinquaw Dancers from the Cowichan First Nation at the 2nd annual Aboriginal Cultural Festival in Victoria, British Columbia. Children learn their traditional songs, dances and stories and participate at ceremonies and festivals from a young age. 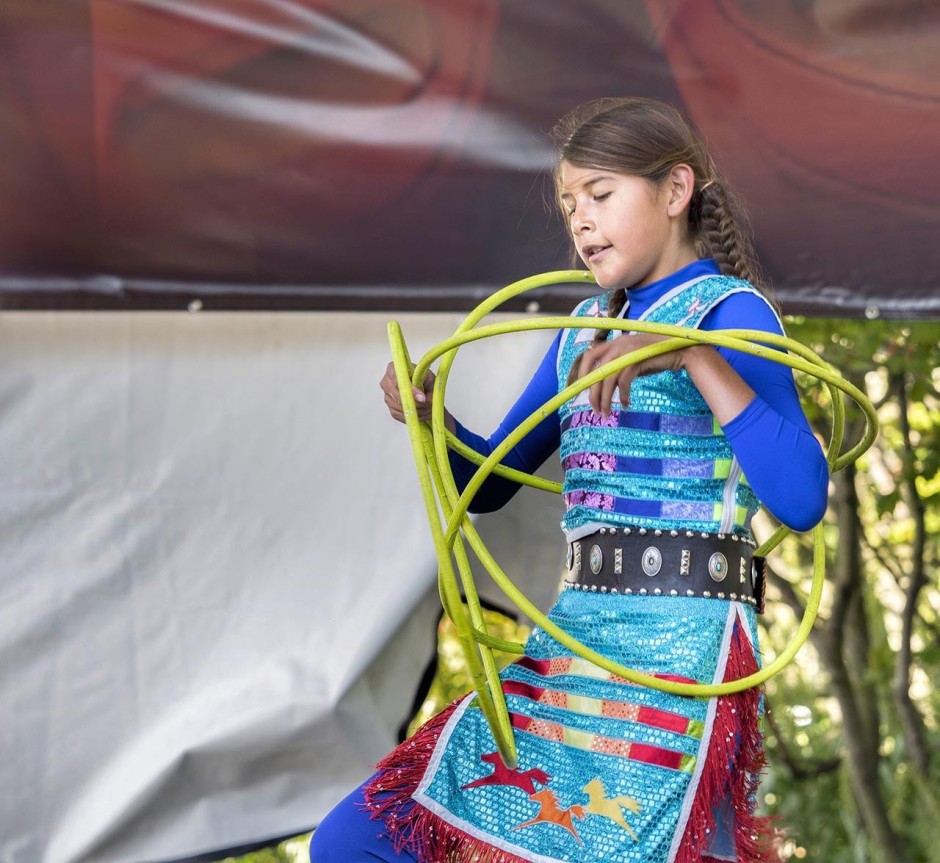 Amber Wells shares her story through a hoop dance. Amber’s father, Alex Wells is a 3-time world champion hoop dancer and has taught Amber the basics of this dance to which she has added her own elements. 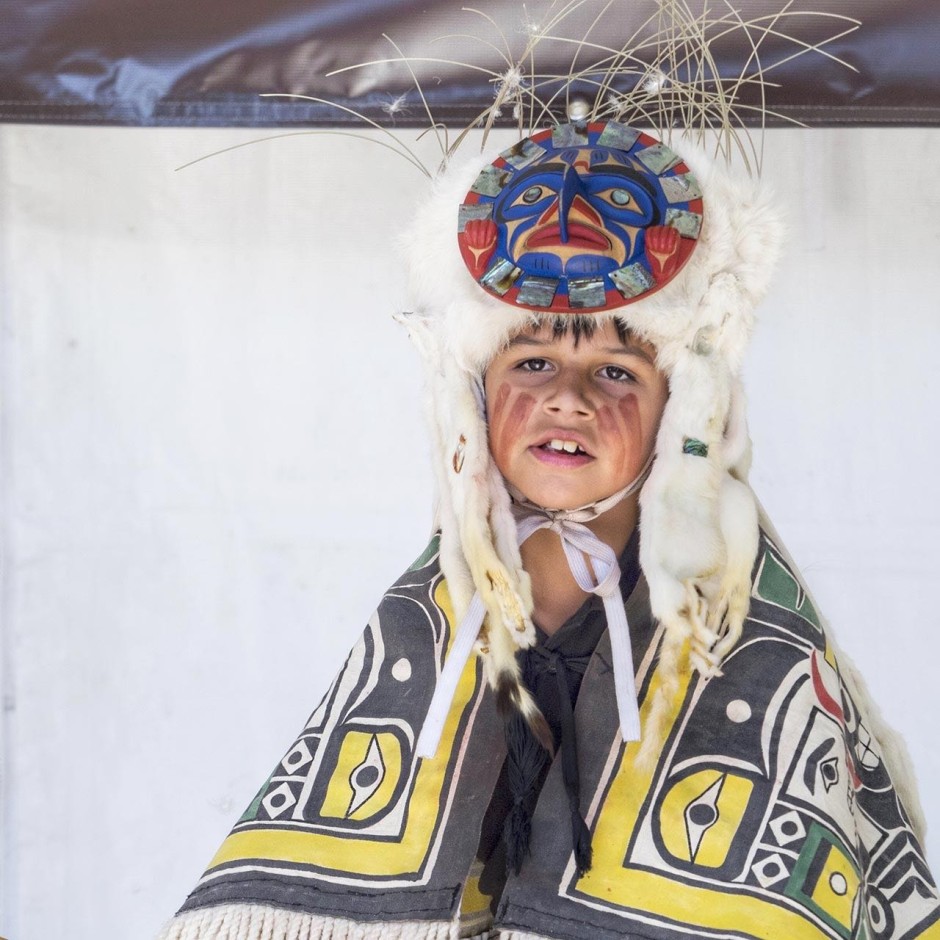 Matthew Everson on stage at the 2nd annual Aboriginal Cultural Festival in Victoria, British Columbia. Matthew is a 2nd-generation dancer in the Le-La-La Dancers First Nation Dance Company and son of dancer and artist, Andy Everson. 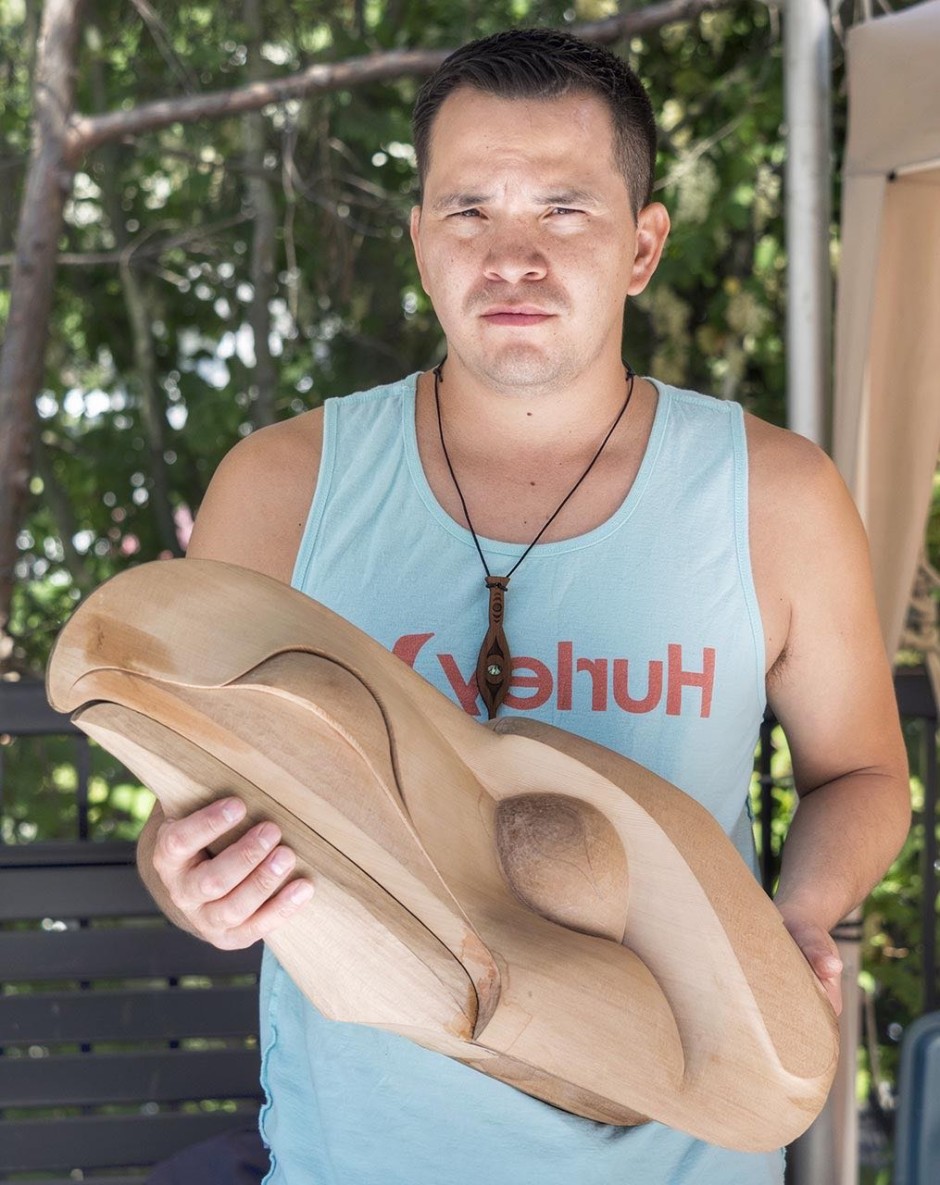 Kelly Robinson of Nuu-chah-nulth and Nuxalk First Nations displays a raven mask that he carved from yellow cedar. Kelly shared that his favorite animal to carve is the raven as it the light bringer, it brings light to the world. Kelly comes from a family of carvers as his uncles and grandfathers are also work with this art. This mask is used for dances or ceremonies such as the potlatch. 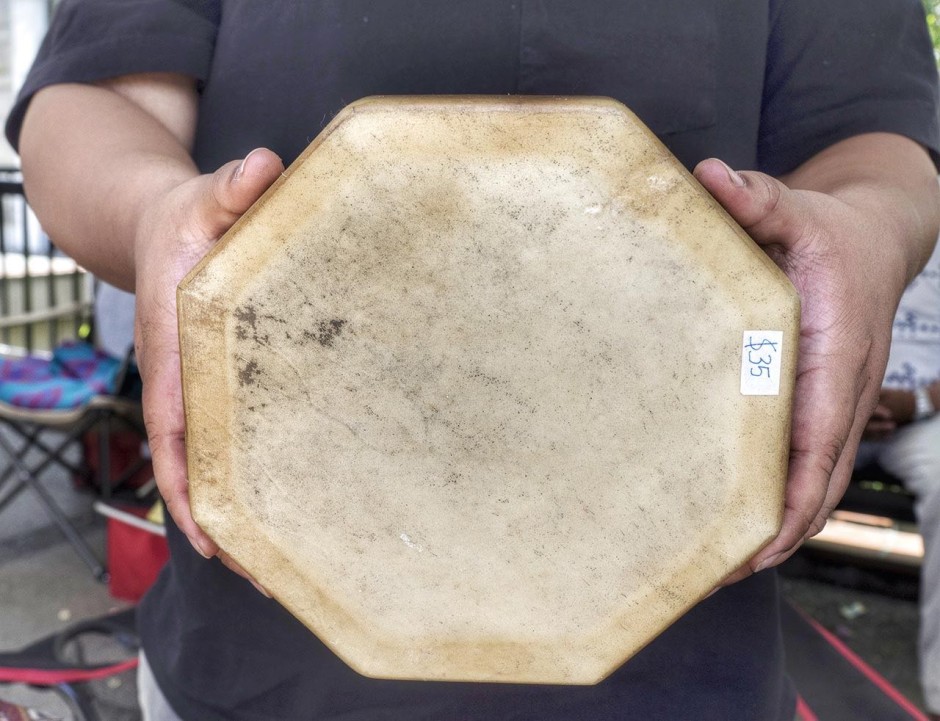 Young Michael Sheena of the Pauquachin First Nation shows off a drum he made from cut pieces of deer hide. He learned how to make rattles and drums from his grandfather, Virgil Bob. Virgil shared the month-long process of preparing a hide, such as putting the fur in a special solution and the scraping of fur. Michael comes from a family of artists as his grandfather’s sisters, Alva and Iona are weavers and jewelry designers. Michael was with his aunts and grandfather in the booth. I learned that Michael and Virgil also use elk and bear hide for their instruments. 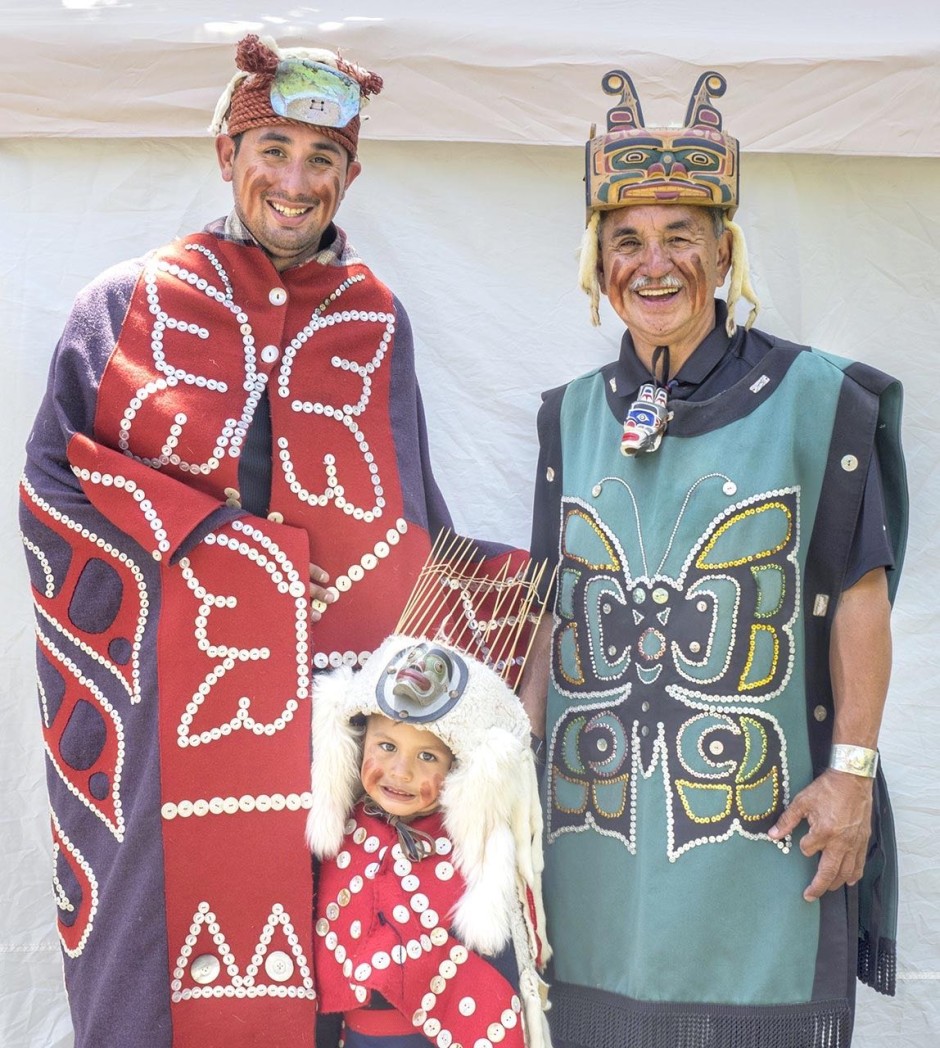 [Note: Andrea was a guest of Tourism Victoria.]

Tagged
Student Work Canada
What did you think of this story?
Meh
Good
Awesome