10:41 Feb 11, 2020
Top Countries
Top CitiesView All Destinations
Trending Countries
Trending Cities
Load More
Has flying kept you from exploring the world? Here’s some easy ways to help you get over your fear.

FOR YEARS, I FOUND excuses not to travel out of the country. It cost too much. I had to finish my education. I simply couldn’t go when the weather was cold.

The truth of the matter, however, was that I was afraid to fly.

This went on until my desire to explore the world overpowered my innate fear of rising above the clouds in a steel soda straw. So I had a few martinis and hopped on a flight out of the United States.

I realized I had nothing to fear after all. Since that first triumph, I’ve become an avid overseas traveler. Still, every time I fly I find myself nervous. I’ve picked up a few tricks to alleviate my fear of flying.

Here are five tips that will help those who suffer from similar anxiety.

1. Know what to expect

Familiarize yourself with the sights and sounds of flying. Understand the bumps and movements of an airplane.

Without knowing what to expect at the airport and on the flight itself, your mind tends to wander.

Familiarize yourself with the sights and sounds of flying. Understand the bumps and movements of an airplane.

Getting an idea of what flying is actually like beforehand will help you form a realistic notion of what you’re experiencing during take-off or when the plane hits turbulence.

Talk to friends who have flown. Ask them to describe the process from start to finish. Question them about turbulence. Do they have a “bad turbulence” story? Chances are that they do. Then, realize they are still here to tell you the story.

Flyingwithoutfear.com is a wonderful site that is loaded with free content. You can listen to the sounds of every aspect of flying – from engine noise at take off, to final boarding calls in the airport.

There are videos that describe exactly what you will see and help you understand what to expect. You can even find a support forum to discuss your concerns with other travelers.

2. Understand why flying is actually safe 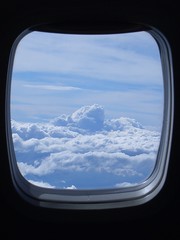 We have all heard the saying: “You’re more likely to die in a car accident on the way to the airport than on the plane.”

This is certainly true. Statistics show you are in fact 500-1000 times more likely to meet your end on the highway. But let’s face it; this does not really help calm your nerves. You are still not in control of the plane!

But consider: how many drivers are actually in control of what other drivers are doing on the road around them? None! I’m fairly confident that 40,000+ Americans are not dying each year in a car wreck because they have control over the situation.

Then consider that since 1970 there have been only 58 fatal events between 16 different U. and Canada airlines. That is an estimated total of approximately 36.6 fatal events (at least one person died) per 16 million flights.

Granted, crunching these numbers might not make you feel comfortable flying. It should however give you hope that your chances of getting to your destination on a plane are pretty darn good.

3. Sit on the wing and breathe the fresh air

If the idea of turbulence is your nemesis, grab a seat on the wing of the plane.

Getting yourself onto the plane is only half the battle. You still have to deal with your nerves acting up while you are in your seat.

The cool air from the valve above you is a great way to chill out and relax. Open the nozzle full blast and direct it onto your face. The rush of air will not only help calm your heavy breathing, but will also keep your underarms a bit dryer. (You want to minimize the amount of sweat you will have to wear for the next few hours.)

It’s possible the turbulence you will feel in the back of the plane isn’t going to be significantly worse than in the middle.

Still, if you think of the plane like a teeter-totter or seesaw with the wings as the pivot in the middle, it makes sense that you would feel less bumpiness sitting in the center. It certainly works for me.

4. Just pretend you’re on A bus

It sounds too simple to work, but it does. Closing your eyes and imagining that you are just taking a bus ride can really help.

When it comes down to it, being on a plane doesn’t feel that much different from being on a Greyhound bus (once you’re in the air).

Turbulence often resembles a bumpy road. And the possibility of your neighbor being too big for their seat and nodding off onto your shoulder no matter is real, whether you’re on the highway or 35,000 feet over Alaska.

5. Sedatives are just a doctor’s appointment away

When there is simply no way to get around your fears, and thoughts of canceling your flight flash in your head, make an appointment to see your doctor.

Explain the situation and ask for a prescription of sedatives such as Xanax (brand name) or Alprazolam. There is nothing to be ashamed of. These little pills come in .25 .5, and 1 mg doses. You and your doctor will decide what dosage is best for you.

With one or two of these pills you may not be able to alleviate all your apprehensions, but you certainly won’t feel quite as tense. Just be sure to wait until you get to the airport to pop the pill, or have someone else drive you there.

Likewise, don’t fall asleep in the waiting area and miss your flight!

If a prescription is not an option for you, remember that most major airlines are now taking credit cards for alcohol purchases during a flight and many foreign carriers still offer complimentary booze.

One or two drinks can calm your nerves, but don’t drink too much, because alcohol hits your body much harder in flight than on the ground.

Giving into your fear of flying can cause you to miss out on the fantastic chance of traveling the world.

The confidence and sense of accomplishment you gain by visiting a distant land is only more gratifying when you arrive by conquering your fears.