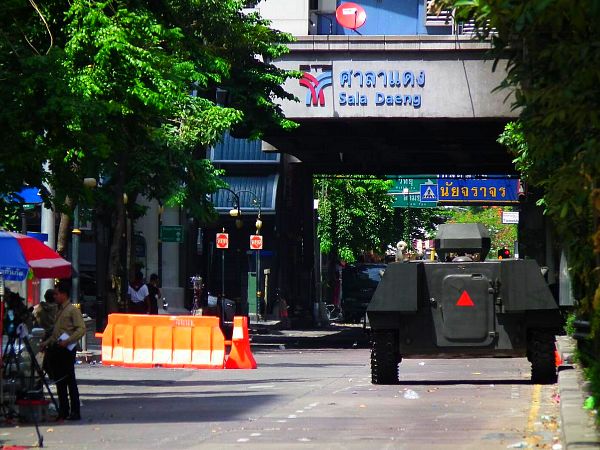 Living as an expat in Bangkok, Dane Phillips saw the recent protests firsthand – and wonders how he could still be so far away from it all.

Ed. Note: This piece was written just after the military crackdown in Bangkok last week, and before the purported “return to normalcy” today.

I LIVE ON THE edge of the protest site in Bangkok, and I watched much of the city burn from my office window this morning. I’ve had soldiers with machine guns as doormen for weeks, and the echoes of explosions and gunshots have replaced the noise of traffic and bustle in the city.

Today, I had lunch at the hospital across the street because it’s the only thing open on a roadway that has been blocked off to make way for tanks and police vans. As I walked out of the front door, an ambulance rushed in. It was carrying a journalist who had been hit by a grenade.

I was fortunately in front of the vehicle, so I only saw doctors and his cameraman rushing him into the hospital. But I noticed moments later when they brought out a bloodied gurney to rinse off.

The events of the last couple of weeks (and this moment in particular) have made me constantly aware of distance. It at times seems strange that I live so close to an area that has been prevalent in international news for two months. I felt especially near to the chaos this morning when I could see events and locations more clearly with my own eyes than I could even on television. 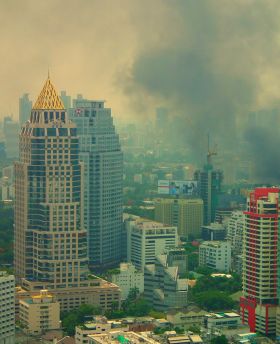 For weeks, I have heard sounds only described in newspaper articles actually bouncing from deserted buildings in my neighborhood. So I am close, but simultaneously unfathomably far away from it all.

I have never felt like I was in any real danger, despite the fact that dozens of people have been dying just a few blocks from me.

Both protesters and soldiers have had the pall of death hanging over them every hour of every day, and yet I remain safely partitioned from that threat…by my nationality, my ethnicity, and my money.

I get to sleep in a safe bed every night because I can afford a few hundred dollars a month rent.

More importantly, I’ve never been driven by poverty to fight the establishment. I carry freedom with me as conveniently as a passport, because as a Westerner I have never faced the kind of oppression I’ve seen in so much of the world.

And because a foreigner dying is much worse press than a local dying, neither side would want anything to happen to me. So distance is not absolute. It’s Zeno’s Paradox: despite the fact that I can watch all of this going on, I could never actually get there.

It’s also fascinating to me that there is a closeness where one might expect distance to exist. There seems like there should be a rift between protesters and soldiers, who have of course been fighting and killing one another. But the fact is that they often come from similar backgrounds.

One in the Same 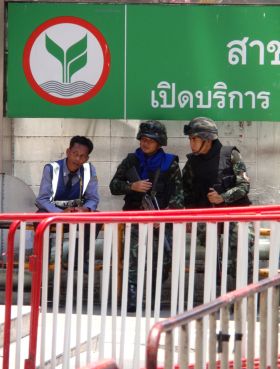 As is the case in many nations, the wealthy have no need to undertake military service, so these soldiers actually come from the same rural areas and feel the same disillusionment as the protesters.

They have, in fact, been seen chatting it up during times of calm. It’s part of what has allowed the protests to go on as long as they have.

Soldiers are in no hurry to rush in and harm or kill people who are not only their countrymen, but also their socioeconomic equals. So there are impoverished people on both sides of the barricades.

It’s just that some picked up rifles and others took up plows in an effort to make a living. And the reality as I see it is that both sides are merely enforcers for wealthy elites with differing agendas. They are individuals closely linked by their overwhelming similarities, but ultimately distanced by their loyalties.

And then there is time, the most powerful creator of distance. All of this will seem unimaginably far away in a matter of weeks. Life will return to normal. The streets will be cleared. The fires put out. The malls and hotels restored to their former grandeur. People will go to IMAX movies on a street where the poor tried unsuccessfully to change the world.

They will stroll casually through a park where soldiers are at this moment being killed by grenades and homemade bombs. But their blood will soon be washed away and their existence forgotten, because these are events everyone in the country will be in a hurry to put behind them.

So as improbable and terrible as it seems right now, I have a feeling that for entirely too many people, all of this will eventually be the only kind of painful memory they can actually deal with: a distant one.

Do you think Westerners could ever fully understand the plight of government oppression against many of the poor in the world? Share your thoughts below.

Over at Matador Change, Ross Tabak provides a stunning photo essay of the Protests in Thailand.

Tagged
Culture Activism Bangkok, Thailand
What did you think of this story?
Meh
Good
Awesome