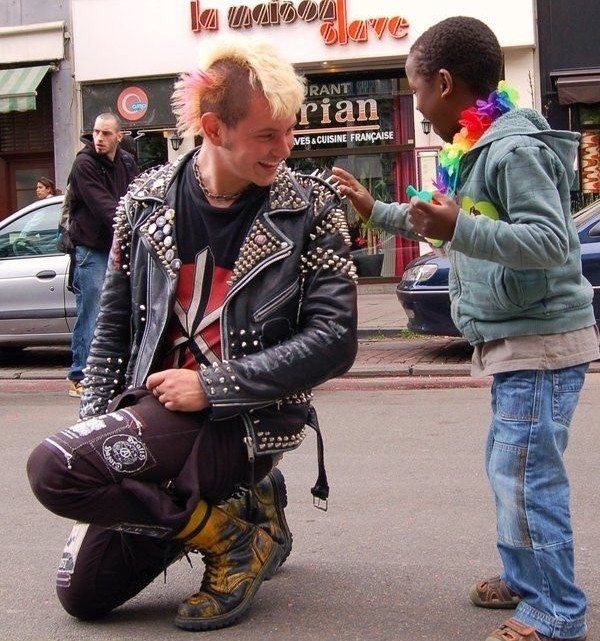 The picture above is a popular photo that made its way around the internet this week. It was titled, Against All Prejudices.

Cute and happy photo, for sure. But what does the title imply, exactly? That those with mohawks are usually racist? That small children are usually homophobic?

Enjoying the photo for their winning smiles, excitement, and human connection is one thing. But giving it a title that seems to say, “Look, we can all get along if the punk and the black kid can!” is another.

The stereotypical generalizations based on appearance here are endless, and most of the people on the “fringe” and kids I’ve known in my life tend to fall on the low-end of bigotry. Give me a photo of Joe Wilson excitedly handing the Nobel Peace Prize over to Obama with that title instead.

But, as usual, there is a sparked debate about the picture over at Reddit. One person notes:

I believe he was making the point that this flies in the face of OTHER people’s prejudices, not necessarily the characters in the picture.

Maybe that is the point. Or maybe both views can be true.

What do you think about the photo’s title? Share your thoughts below.

What did you think of this article?
Meh
Good
Awesome
Bookmark
Posted In
Culture Photo + Video + Film