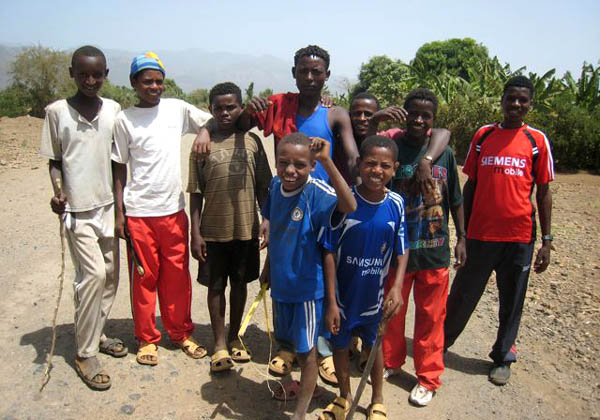 Meeting children on the road is one of the joys of travel… unless they have an unusually painful way of showing their affection.

After cycling through the East African Nation of Ethiopia, these phrases will forever be ingrained in my brain.

Brought to the Worlds attention through Live Aid in the 1980’s, Ethiopia is largely remembered in the West for its drought and famine.

There is no way to prepare for the thousands of children that will use you for target practice as you make your way down the country.

Today it is a lush and vibrant country filled with lakes, jungles and mountainous vistas cutting through the Rift Valley. The Nile runs south to its source at Lake Tana and it houses the incredibly beautiful Blue Nile Gorge.

It is exactly these features that make it one of the most difficult countries in Africa to cycle through.

The roads are rocky and sometimes non-existent, the mountain climbs are treacherous and the extreme heat and altitude can take its toll on anyone. It is a serious challenge, but with enough training and preparation, one can handle the elements.

There is no way however, to prepare for the thousands of children that will use you for target practice as you make your way down the country. 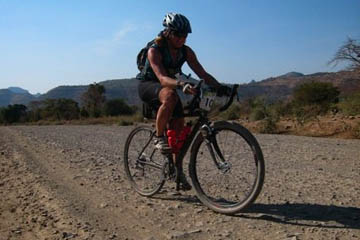 Throughout my 23 days in Ethiopia, I was whipped with a bullwhip, slashed at with a machete, had gravel thrown in my face, and rocks of various sizes hurled at me from all directions.

Maybe it was a term of endearment. Maybe it was their way of saying I like you… the way a little boy pulls a girl’s hair to show he has a crush on her.

Whatever it was, there was no escaping their wrath, no reasoning with the little boys who were up to no good – and no way of knowing when the next pack was going to strike.

But how can you blame them – they must have thought we were nuts. In Ethiopia, bikes are ridden for necessity and work. It gets them from point A to point B.

“Why are these crazy foreigners torturing themselves riding through unbearable heat and climbing insane mountains dressed in their silly spandex and bike helmets?”

I had to admire the kids’ talent and perfect aim. They could make a rock zip through the air with great distance and precision. Forget going to the Dominican Republic or Japan. Major League Baseball scouts need to go to Ethiopia for their next draft season.

There is a star pitcher in every village we passed through.

Ethiopia’s mountains can reach over 4000 meters in altitude. For hours on end, I struggled at a mere 6km per hour up steep inclines. 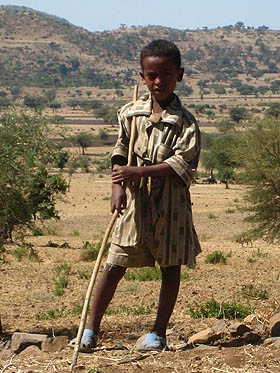 Children would run beside me, never seeming to tire. I was frustrated, but even more embarrassed. Here I was on a high tech machine and these kids could run backwards faster than I could turn my pedals.

I craved silence to wallow alone in my misery, but instead the group of children yelled their infamous chant. “You, you, you, give me money, give me money.” They grabbed at my pack, pulled on my wheel and tried to hop on for a ride.

They slapped my butt numerous times before I realized it was their way of figuring out the material of my cycling shorts.

In Ethiopia, the descents are more punishing than the climb itself. The rough roads would shake my body like a jackhammer… and always, I had to be on guard for more children.

It seemed that every child carried a staff to control their herds of cattle. They didn’t hesitate to try to stick their weapon of choice through the spokes of my tires.

Little girls would jump out in front of me as I careened in at top speed, forcing me to swerve wildly to avoid a collision. They didn’t understand the danger that they were putting themselves in. They would just laugh and run away.

Friendship In Many Forms

With great relief I made it to the Kenyan border in one piece. I can’t say that I will miss cycling in Ethiopia, but I would like to go back and travel it by local transport and stay in the villages.

I would stop and take the time to get to know the people better. Racing through on a bicycle didn’t give me a chance to really connect with anyone. I was too busy trying to make it to camp before the sun went down.

I never did figure out why the children would throw rocks at us.

I just wish their friendship wasn’t so painful.

Have you had painful, or unsusual, experiences with local children? Share your stories in the comments!