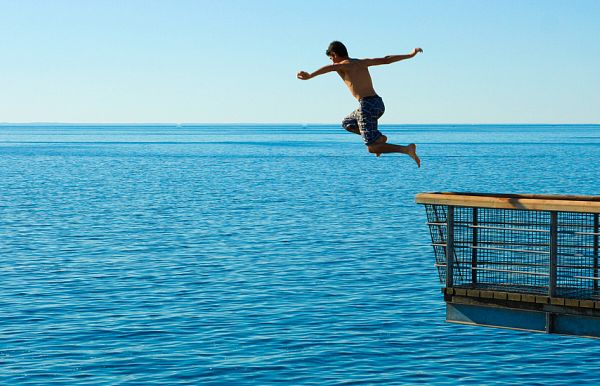 Reannon Muth wonders if the modern daredevil has become obsolete.

LONG BEFORE MY first attempt at scaling the side of a mountain, I scaled the side of my parents’ two-story house.

Using my bedspread as a make-shift rope, I kicked out my bedroom window and prepared to swing Tarzan-style down to the ground 50 feet below. I was seven.

Luckily, my father caught me dangling from the window-ledge just in time to spare a trip to the ER. But not in time to spare me from a life-long addiction to thrills and daring adventures. That, apparently, had been hard-wired into my brain since birth.

According to research conducted by University of Delaware professor Marvin Zuckerman, not only is my passion for living on the edge a trait of a risk-taking personality type, it’s also hereditary. I’m a risk-taker – or high sensation-seeker – a label Zuckerman attributes to anyone who craves “novel, intense and complex sensations and experiences” and is willing to engage in risky behavior in order to achieve them.

In modern society, daredevils are usually considered oddballs or worse, adrenaline junkies with a death wish.

And while that often involves physical risks, not everyone needs to be a sky-diving instructor in order to consider herself a risk-taker. According to Zuckerman, the risk-taking trait can manifest itself in other behaviors. Someone who enjoys exploring a foreign city without a map, for example, would be considered an “Experience-seeking” risk-taker. And those easily bored by routine and who frequently move or switch jobs are called “Boredom Susceptibility” risk-takers.

Although there might be a little Evel Knievel lurking in your entrepreneurial next-door neighbor, it’s usually the climber on Everest or the crocodile hunter that receive the attention. And it’s often negative. In modern society, daredevils are usually considered oddballs or worse, adrenaline junkies with a death wish. But it wasn’t always like that. 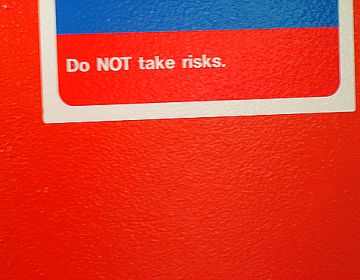 As the theory goes, the risk-takers of yore were not only valued members of a tribe, but absolutely vital to humankind’s survival.

While the play-it-safers stuck close to their berry patches, their more adventurous counterparts risked life and limb hunting the saber-tooth tiger or investigating a newly-discovered cave.

Not surprisingly, many a risk-taking caveman didn’t survive that elephant tusk to the back or drink from that contaminated watering-hole. But as psychologist Michael Aptor, author of the book “Dangerous Edge: The Psychology of Excitement”, pointed out in the Psychology Today article, Risk, “it’s better for one person to eat a poisonous fruit than for everybody.” It was because of these early risk-takers that our species was able to survive.

But you wouldn’t know it from people’s reactions today. Up until recently, the theory was that human beings main motivation in life was tension-avoidance, so those adventurists who actively sought it were deemed impaired and even crazy. Some researchers not only consider the risk-taking personality “abnormal”, but theorize that it’s becoming obsolete.

They have a point. In the modern world, where no waters are left uncharted or lands undiscovered, there just isn’t a need in society for the girl gutsy enough to dive for oysters in shark-infested water.

Michael Alvear, in the Salon article Risky Business, wrote: “You can’t swing a helmeted cat without hitting a mandated safety precaution.” And although those helmet laws and health inspections have made the modern world safer, they’ve also sapped it of the very thing that makes life interesting: it’s wild unpredictability.

And this is bad news for those programmed to crave adventure. Because as science has shown, a thirst for novelty is in the risk-taker’s blood. While neuroscientists have yet to agree which gene is responsible for why some prefer paint-balling to painting, a study from Vanderbilt University in Nashville found that those who crave an element of danger do so because their brains have trouble regulating dopamine.

Science has shown, a thirst for novelty is in the risk-taker’s blood.

Dopamine is the brain’s “happy juice”. It’s the chemical you can thank for that blissful feeling you experience while eating that chocolate sundae or sharing a romantic evening with a lover. And in the brain of a high-sensation seeker (who is believed to have fewer of a dopamine-blocking enzyme), it’s overflowing. Which is why the risk-taker may feel bizarrely elated at the prospect of jumping off a cliff, whereas the average person feels merely frightened and stressed.

Not that the average person doesn’t enjoy the occasional weekend ski-trip. On a scale of sensation-seeking tendencies, with the couch potato on one end and the base jumper on the other, most people fall somewhere in between. And that’s unlikely to change, no matter how many safety nets or seat-belts society cocoons itself in. 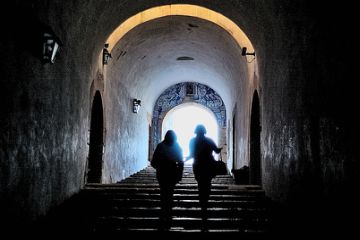 Walking into the unknown / Photo: Jsome1

But adrenaline junkies (those who struggle to cope with the mundane existence of every-day life) are a different breed. And as evolution has demonstrated, over time, when a trait ceases to be advantageous, it ceases to exist.

So with an intense desire for adventure literally pumping through their veins and with no spear-throwing tribesman in sight, what’s a modern daredevil to do?

Well, as the article “Risk” and the spike in popularity of adventure tourism would suggest, when you can’t find danger, you create it. And that’s why we find grannies giddily signing up for white-water rafting in Costa Rica or college students heading to orphanages in New Delhi for voluntourism gigs.

Last weekend, 20 years since that day on my window-ledge, I stood on a different sort of ledge, the kind 200 feet above ground and attached to a cliff on the border of a Guatemalan jungle. As I readied myself to zip-line across the tree tops, I prayed that metal and cable would prove studier than the bedspread. I was nervous. But perhaps not unsurprisingly, exhilarated, too.

Maybe we risk-takers are a dying breed. But you can be sure that if we do all die out, we’ll be going out in style: para-gliding, free-falling and bungeeing our way into extinction.

Do you think true risk-taking is still possible in our society? What are some of the risks you have taken? Share them below.