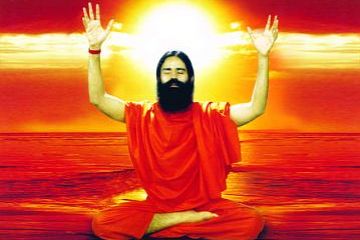 Swami Ramdev in his natural habitat

Who said yoga and politics don’t mix? Ok, maybe no one, but nonetheless, it looks like this adage is about to be tested.

Swami Ramdev, you know, the guy who says yoga can cure anything, is just about ready to take on Indian politics.

In case you don’t know much about this guru, as the Times article about his political aspirations points out, he is kind of the Oprah Winfrey of yoga in India, having amassed a large empire through television and the web.

According to Ramdev, India’s political system is rife with corruption and the country is divided by caste, and the only way out of this “disgraced state” is to tap into the wisdom of yoga and the holy texts the Vedas and Upanishads.

In other words, he wants India, and Indians, to gain self-reliance through a spiritual prism. Interesting perspective, one that has not necessarily worked in the past (Spanish Inquisition, anyone?), but might be different through a peaceful approach like yoga, right? In some ways, thoughts of Gandhi can’t help but float through the mind.

Things that make me a little nervous:

He’s also a bit shy on specifics (other than the whole “punishable by death” part), although he says he himself will not run for office.

What do other religious leaders in India think about Ramdev’s plans? Some think he is just what India needs, that he will move India in the right direction through employing spiritual techniques. Others think he will be “consumed by the dirt of politics”, and “his ego will finish him.”

What do you think about a spiritual leader becoming a political leader? Is it possible a person to be good at both? Share your thoughts below.

Tagged
Culture Religion India
What did you think of this story?
Meh
Good
Awesome