This question was essentially on display this weekend at Epic: The Sustainable Living Expo in Vancouver, BC.

I was able to secure a media pass and attend the event, held at Canada Place on the ocean, amid a torrential downpour that’s not out of the ordinary this time of year.

I wandered from booth to booth, snapping photos, glancing over information materials, samples and booklets, inspired by the sheer range and ingenuity represented by these green companies and entrepreneurs.

Surely, with no limit to our collective potential, the future looked bright. 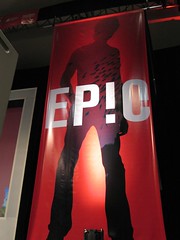 But I couldn’t help but wonder how much the glossy optimism, embodied in the latest Toyota Hybrid or trendy green smoothie, was just techno-utopianism in disguise.

Considering the impact constant growth has inflicted on the planet in the last few decades, can consumerism be harnessed to save the planet?

Chris Koscher, a friend and Atmospheric Scientist, remembers the previous earth friendly wave from his youth. “Earth Day was huge when I was kid,” he says. “Everyone was on the bandwagon. McDonald’s was even handing out fresh saplings with their happy meals.”

But then, almost inexplicably, the fervor slipped out of the media and everyone went back to their own lives, polluting more than ever before. Years later, the issue has resurfaced again, this time hitting the mainstream with a vengeance.

This begs the question: will images of stranded polar bears and millions of environmental refugees spur us to take meaningful action?

While skeptical, Chris hopes this time around it’s not just a fad. If the chorus of scientists around the world are even close to accurate in their predictions, we don’t have time to gamble with our future.

If We Imagine It, We Can Build It 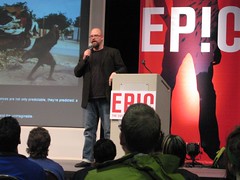 Alex Steffen, editor for WorldChanging.com, eloquently posed the challenge we face in his closing talk of the sustainability expo that night, which he also echoes in the forward of his excellent book.

We need, in the next twenty-five years or so, to do something never been done before. We need to consciously redesign the entire material basis of our civilization.

The model we replace it with must be dramatically more ecologically sustainable, offer large increases in prosperity for everyone on the planet, and not only function in areas of chaos and corruption, but also help transform them.

And keep in mind, the rate at which we use the planet’s resources is increasing everyday.

Since we are already running an ecological deficit, and since that deficit is getting bigger, there is absolutely no reason to believe that we can try one thing for a couple decades, and then, if that doesn’t work, try something else.

The living fabric of the planet, once unraveled, will never come back, at least not for a millenia. There are no do-overs on a finite planet.

So that’s the bad news. But here’s the good news:

We live in an era when the number of people working to make the world better is exploding. Humanity’s fate rests on the outcome of the race between problem solvers and the problems themselves.

The world is getting better-we just have to make sure it gets better faster than it gets worse.

As I left the sustainability expo that night, I felt a little overwhelmed with the task.

Yet it was impossible to ignore the contagious optimism that characterized the event, and how willing the participants appeared to recognize the scope of the problem.

We cannot fail in the years ahead.

So if we believe that shifting our spending habits to more sustainable businesses will indeed save the world, we’d better be sure that’s the right direction.

Ian MacKenzie is editor of Brave New Traveler, and co-founder of the blogging community TravelBlogger. Aside from writing, he spends his time exploring the fundamental nature of existence and wishing he did more backpacking.

What do you think – can we buy ourselves a better future?