Gulliver is swarmed by little people.

Classic works often contain surprising relevance to our own life and travels.

THERE’S A REASON why some tales, like Gulliver’s Travels, are considered classic works, contrary to what one may have believed in high school.

I received some out-of-class instruction upon this matter on a recent trip in Southeast Asia when I picked up the book due to its voyaging theme. What I found was a very applicable (and surprising) parallel between Jonathan Swift’s 18th century novel and my own life.

The book is split into four different voyages that Gulliver undertakes. The first is the most well-known, where Gulliver is captured by a race of diminutive peoples, but the trip that most interested me was his final adventure.

Gulliver learns the language of the Houyhnhnms and finds himself enamored with the noble creatures, whose society lacks base desires such as greed, selfishness or violence.

Like his previous three seafaring episodes, Gulliver once again (you’d think he’d learn by now) finds himself bereft on the shore of some unknown land.

The creatures populating this particular isle are the most unusual of the whole novel. The principle inhabitants are a race of ultra-intelligent and extremely logical horses, called Houyhnhnms. The Houyhnhnms initially react suspiciously to Gulliver because he closely resembles the other species that lives on the island — a barbaric, speechless humanoid race called Yahoos.

In time, Gulliver learns the language of the Houyhnhnms and finds himself enamored with the noble creatures, whose society lacks base desires such as greed, selfishness or violence.

He begins to dread ever facing humanity again, unable to bear its multitude of vices after observing the equine utopia. While he began his tenure on the island explaining and defending his fellow humans, he has now changed to the point where he cannot go back to what was once so familiar. 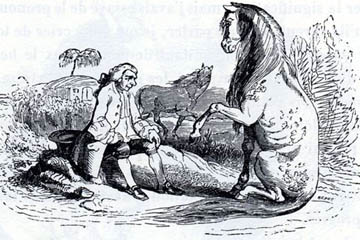 Gulliver speaks with a Houyhnhnm / Source.

While Gulliver found himself disgusted with all of human natural in general, I struggle with one vice in particular – procrastination. I’ve spent my life consistently putting things off and constantly endeavoring to distract from any task I attempt to undertake.

Yet, as I traveled solo across the Asian continent, leaving behind a whole host of distractions, I felt a sense of liberation and energy not typically present in my day-to-day. I tackled day trips and night life with equal enthusiasm, made new friends every day and only slept on the bus rides.

The first leg of my solo journey went through China, starting in Beijing then by train to Shanghai and on down to Vietnam. My Gulliver moment (as it were) occurred on the 28-hour trip from Shanghai to the small town of Nanning.

I had been traveling for a little over a week with little pause. I had seen the Great Wall and Tiananmen Square, explored tiny Beijing alleys on a bike, walked around downtown Shanghai for hours and drank beer with a British telecom consultant. For a guy who often has trouble even finding the will to send the occasionally email to his parents, all this activity was a rare feat.

I had wondered, prior to my leaving, the wisdom of such an endeavor and even more about the prospect of doing it alone. I feared I might reach a few weeks into my trip and start longing for the comfort of a couch and my laptop. I had been afraid that if I pushed my boundaries, the boundaries would push back.

Would I retreat back to safety rather or apply enough force to break free?

What I found is that when given absolutely no choice but to do, I did. As human beings, we all tend to under-estimate our abilities. On the road, I surprised myself with what I was capable of, and the resulting discovery has shifted the way in which I want to live my life.

Yet, along with this sense of discovery there was a growing worry. When finally faced with eviction from the Houyhnhnm lands, Gulliver despairs; so did I as the date for my flight home approached.

My experiences had changed me, but it had been a product of my surroundings. I wondered how much would stay once the scenery changed.

Gulliver knew that he was not capable of achieving the kind of serenity exhumed by the Houyhnhnms, but could only observe and absorb it by being around them.

In the same way, I knew that the kind of energetic, adventurous and outgoing self that I had found out in Southeast Asia would be hard to reproduce once I arrived back home, surrounded by conveniences and excuses.

This whole scenario is often both the reason for and challenge of backpacking abroad.

We displace ourselves in circumstance in order to relocate ourselves in mentality. I don’t have any secret insight on how to carry home the things you find while traveling that you can’t pack.

Unfortunately, neither did Gulliver, who was so disgusted by the presence of his family when he returned home that he bought two horses and conversed with them for four hours a day.

The challenge of travel is not to recreate some mythic mindset on the return home, which is what Swift satirizes Gulliver for doing in the book’s conclusion.

Instead, take your experiences from the road and let them help you move further along, no matter where your path finds you.

Tagged
Books Culture
What did you think of this story?
Meh
Good
Awesome