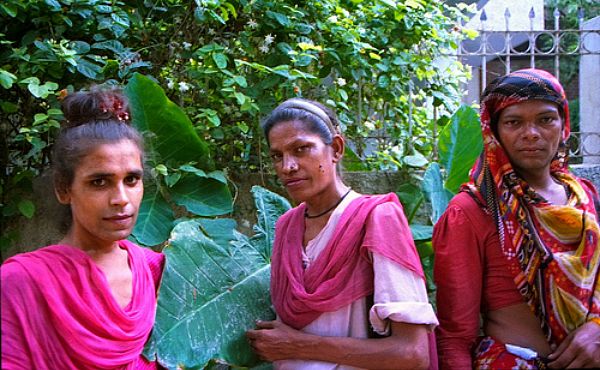 For the uninitiated, the first encounter with a hijra can be quite intimidating.

THE FIRST TIME I heard the hand claps, I didn’t know what was coming.

Already, the train journey from Chennai to Kolkata was proving to be a challenging one. As we were getting nearer to one of the poorest areas in India, there was a constant procession of beggars. We were four westerners and too many Indian men sitting together in a regular sleeper-class train compartment.

At every stop, children, men, and women dressed in rags and despair would offer food, goods, or entertainment in the hopes of making a few rupees. Their eyes robbed me of any ease I might be feeling about being there and owning what I own.

Still, the most disturbing encounters were yet to come.

The hijras – eunuchs, transsexuals, or transgender men – announced themselves by clapping their hands and making a racket. When they arrived to our compartment, they stood in all their weight and flamboyance, requiring money before allowing us to continue quietly with our travels.

The first group that came around did not insist much and were relatively easy to ignore, but the next one proved to be a more experienced and robust couple of go-getters. They quickly selected a sweet-looking Indian man in his late twenties as their victim, and baptized him ‘Uncle’ for the occasion. 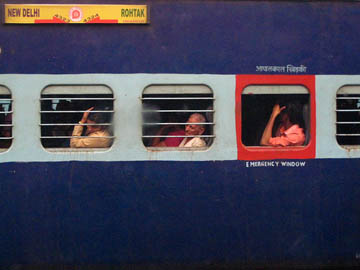 The bigger of the two hijras got close to him and began to spurt, in an unpleasant tone of voice, what sounded like obscenities in Hindi. Sweet ‘Uncle’ blushed profusely and said nothing.

No one said anything, but everyone was staring. None of the other Indians looked like they wanted to fight this man’s battle. The New-Zealand woman sitting in front of me could not hide the disdain, disbelief and pure horror from her face as the situation escalated.

For myself, I thought it was not a time to appear impressed. Luckily, I had read William Dalrymple’s City of Djinns: A Year in Delhi,

in which he tells the stories of a few hijras in Delhi. I knew of their existence, but I did not know they carried out their business in trains, and it was unclear just how far they were willing to go for the money.

As the sweet Indian man was not surrendering any rupees, the big hijra stepped in front of him, lifted his own sari a few times and proceeded to dangle and swing what was left of his “manhood” nearly into the face of the victim. More vulgar sounds ensued and the hijra then bent over to whisper into the man’s ear before slapping him repeatedly on the cheeks.

The intimidation culminated with the two hijras assaulting him, grabbing his wallet and self-serving themselves with the money.

They cursed and left, saying something that might have meant “What is the world coming to, seriously!” It would have made a good scene in a Pedro Almodovar or David Lynch movie – depending on your perspective.

The woman from New Zealand looked like she wanted to call the police or did not understand why security wasn’t there already. Perhaps it was her first day in India. My friend sitting between me and the victim looked on with a stare that had lost some innocence. I figured we were coming out of it all the more learned about the world.

Hijras are often referred to as members of the ‘3rd gender’ in India. They themselves will describe their sexual identity as being neither male nor female. Many have undergone castration, or are otherwise of ambiguous sexual status.

Hijras are often referred to as members of the ‘3rd gender’ in India. They are marginalized and largely left to their own devices to sustain themselves.

They are usually rejected for what they are and the way they live. Still, they are tolerated when they show up uninvited at special ceremonies such as births and weddings where they cash in for performing dances and blessings.

Avoiding confrontation and the curse of the hijras seems to be the priority for Indians in such circumstances.

In any case, they are marginalized and largely left to their own devices to sustain themselves – which include prostitution, dancing, singing and sexual embarrassments of various kinds.

It was not always as such for the hijras. Their presence is recorded far back into India’s history. During the time of the Muslim rule before the British, the hijras had a place at court and were generally valued by society. They did not have to resort as much to the sometimes vulgar means of survival they lend themselves to today.

Yet, as a result of their marginalization, a closely-knit subculture has evolved, and in recent years hijras are slowly emerging on the national stage, standing up for their rights.

A few more groups of hijras came along the train before we reached our final destination, but none were as ferocious as the first group. 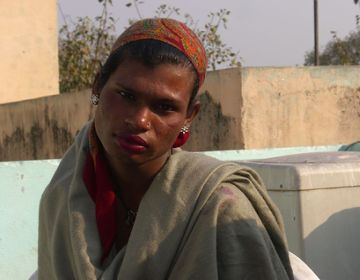 One hijra touched my face at some point so as to provoke me. But without looking at him I simply raised my fist slowly and slightly.

He left without insisting.

I was later told that it was a very bad idea to take on a hijra as they are notoriously aggressive and can come back with reinforcement. Was this simply prejudice or wise advice from a kind Indian man? I was perhaps lucky to not have found out.

What do you think about the hijras approach? Share your thoughts below.