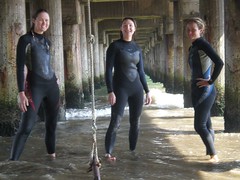 I wasn’t sure that I would be able to recognize him; but his Volkswagen hippie van was unmistakable.

It sputtered up to us in the quiet Vina del Mar city centre twenty minutes behind schedule, painted from hood to tailgate in a blue wave.

Pato got out and greeted us warmly, smiling from ear to ear, as stoked as we were about going surfing. He was older than I had expected; and he radiated a calm vitality that could only come from someone who was doing what they loved most.

It was a vibe that crossed culture and language; something universal. (Later when I learned that he had quit his job as a chemical engineer to pursue surfing, it was simply a confirmation).

Pato packed us into the back of the van and we chugged along the coast; the freezing blue ocean on the left and the brown dry landscape on the right. Eventually the billboards for new ocean front condos gave way to the tan, grassy flatlands that lie between Santiago and the coast.

A Maze Of Pipes

A little further along we hit the inevitable industrial parks and manufacturing centres, and it was just past the gate of a large copper refinery that Pato turned off the road and headed toward the water. I sat-up and cast worried glances to my companions. 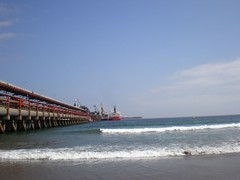 Pato, sensing our uneasiness, smiled into the rearview mirror and told us to trust him. I shrugged.

We pulled into a driveway just up from the beach. To our left was the refinery, looming; to our right a fishing village where dozens of brightly coloured boats were pulled up high on the beach.

We unloaded, untied the boards and Pato produced some wetsuits for us. They looked conspicuously thin for the Antarctic temperatures that I knew awaited us in the water.

Again Pato caught my concern and again told me to trust him. Again I shrugged, (when in Rome) and pulled on the 2mm threadbare suit. We headed towards the shore.

Once on the beach we turned left, much to my surprise, and instead of moving in the direction of the cute little fishing village, we headed towards the copper refinery. If Pato noticed my hesitation, he didn’t let on. I think I knew what he would have said anyway, so I trotted along beside him.

Ahead of us was a long pipeline that stretched along a massive pier which extended hundreds of metres out from shore. At its end were huge tankers and transport ships; some docked to the pier itself, others anchored nearby. 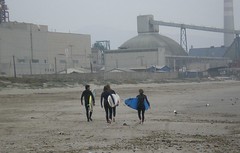 Barely 50 m behind us, lay the refinery: a labyrinth of pipes and smokestacks; concrete towers and low lying rectangular buildings. It steamed away in a dulled throb, slightly muffled by the waves.

The break itself was a short right rolling just enough towards shore to take one away from the pier at just the right moment. There was a slight chlorine smell in the air, but despite my original misgivings about the place, I couldn’t really find anything wrong with either the water or the break.

I smiled to myself and then laughed; truly not what I had expected and certainly like no other break that I had ever seen. But the joke was still on me. I bent and attached my ankle leash and then, like I had many times before, I picked up my board and headed for the water.

But I knew something was different. I felt a warm breeze that did not come from the sun. And sure enough, I stepped into the water only to find it was bathtub warm.

I turned to shake my head at Pato, but he was already paddling out in front of me, his smiling face staring down the tankers at the end of the pier.

If I had thought him capable of being smug, that might have been his moment. I flopped down on my board and chased the heat from the refinery’s outtake pipe out towards the break; paddling through 80F water in my 2mm wetsuit on a sunny day in Chile.

Christina Chowaniec spent her formative years in the wilds of Northern Ontario and now hails from the great wet north of Vancouver. Catch Christina in her next epic adventure, east of Russia, west of China, and pretty much in the middle of nowhere.
What did you think of this article?
Meh
Good
Awesome
Bookmark
Posted In
Culture