THE CLASSIC WAY TO TRAVEL INDIA is either by riding it’s sprawling railways or on the back of a Royal Enfield motorbike. But when I visited India earlier this year, I was looking for something a bit different and altogether more novel. So I jumped at the chance when my good friend Will (aka The Broke Backpacker), invited me to join him as his co-pilot in his customized, psychedelic Tuk-Tuk (which we named Tinkerbell) on a mad dash from Delhi’s chaos towards the fresh mountain air of the Himalayas.

It proved to be a challenging ride as India’s heat and Tinkerbell’s temperament took their toll. But the experience taught me a hell of a lot about India, about the nature of travel, and about myself. Here are 5 things I learned:

When I was offered the chance to co-pilot Tinkerbell, I jumped at the chance. I was so excited, in fact, that I kind of forgot that I can’t actually drive. But necessity is the best teacher. When my turn came to take the wheel, I found that I was able to navigate India’s highways — as well as Tinkerbell’s highly temperamental gear-roulette — with less than 30 minutes instructions barked at me by Will over the ever present grunting of the engine.

Tuk-Tuk’s are not all that complicated to drive as long as they are in working order (which is seldom the case) but still, learning to pilot a rickety bucket of rusted bolts 10,000 miles away from home was a bit nerve-racking. By the end of the day though, the realization that I had done it was a real buzz, and got me thinking that I could probably rise to any old challenge life may throw my way. 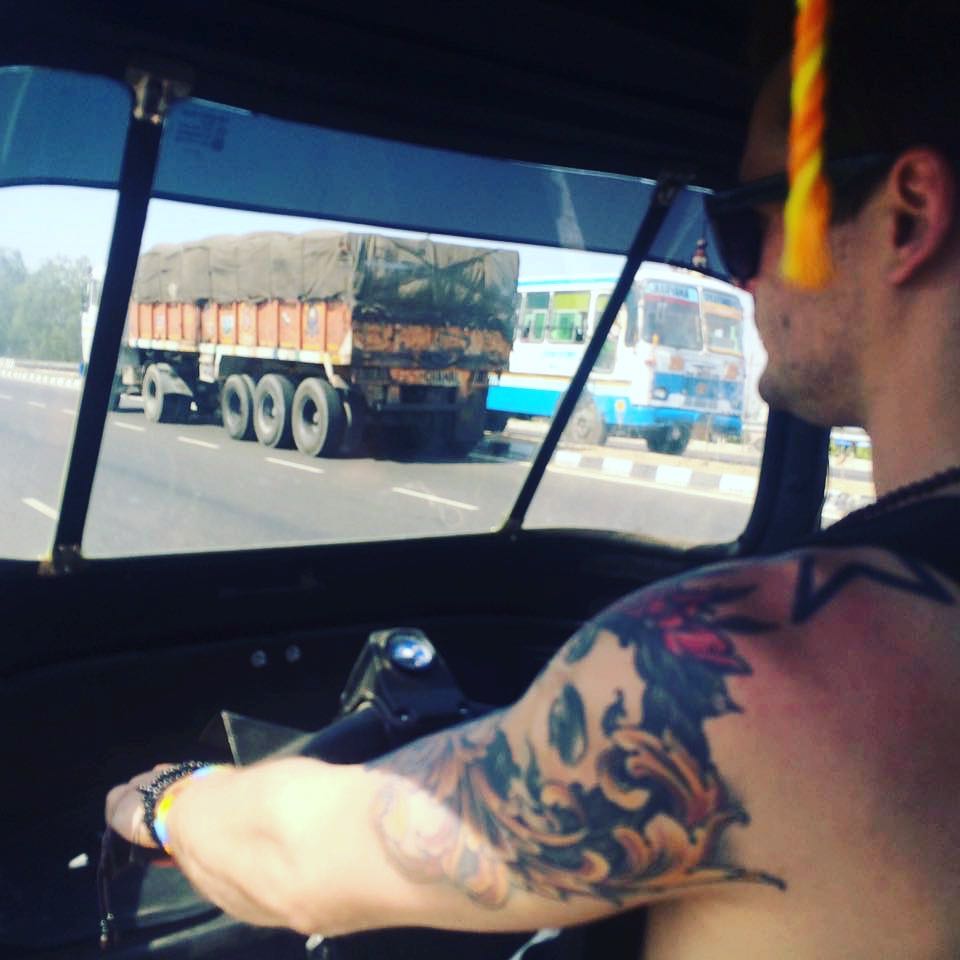 In Hindu culture, cows are sacred animals said to embody Brahma, the ultimate form of God. It seems that their elevated status has not escaped them and they saunter around the entire country doing whatever the hell they want, whenever they want. This often includes walking in the middle of the road, or even bedding down in it for the afternoon and, as a driver, you have to give them priority and pray that they decide to move of their own accord.

They also seem pretty determined to escape the Hindu cycle of death and rebirth as soon as possible by putting themselves in front on moving vehicles. It’s a wonder I didn’t cause any cow road deaths.

Hitting a cow in India can be a very serious business. Drivers are legally protected in the case of genuine accidents, but it is very bad karma. More worryingly though, in some cases locals have been known to mob drivers and take matters into their own hands.

3. The horn is essential.

When I first arrived in India, the constant, relentless, and seemingly pointless papping of passing motorists on city streets annoyed the hell out of me. After all, back in England the horn is to be used as weapon of last resort and sounding it is tantamount to an act of war.

Within a few days of driving Tinkerbell though, I totally got it. It is used to try and usher cows out the way, alert idle pedestrians in the road to their peril, and to signify to other drivers that “Shit, our break has gone and we can’t slow down! ARRRGHH!”

By the end of day two our horn had broken, which made navigating India’s roads even more challenging.

4. Indian mechanics can fix anything (and cheaply).

I have total and utter reverence and awe for Indian mechanics. Partially because during the several visits we paid to them they always gave us Chai and something to smoke, but mostly because of their sheer bloody ingenuity.

Without fail, our mechanics would manage to fix up Tinkerbell within the hour by fashioning vital engine parts out of whatever materials they have to hand.

The best bit of all, though, is that during the Delhi to Manalli trip we were never charged more than 500rps ($10) for labor plus parts. 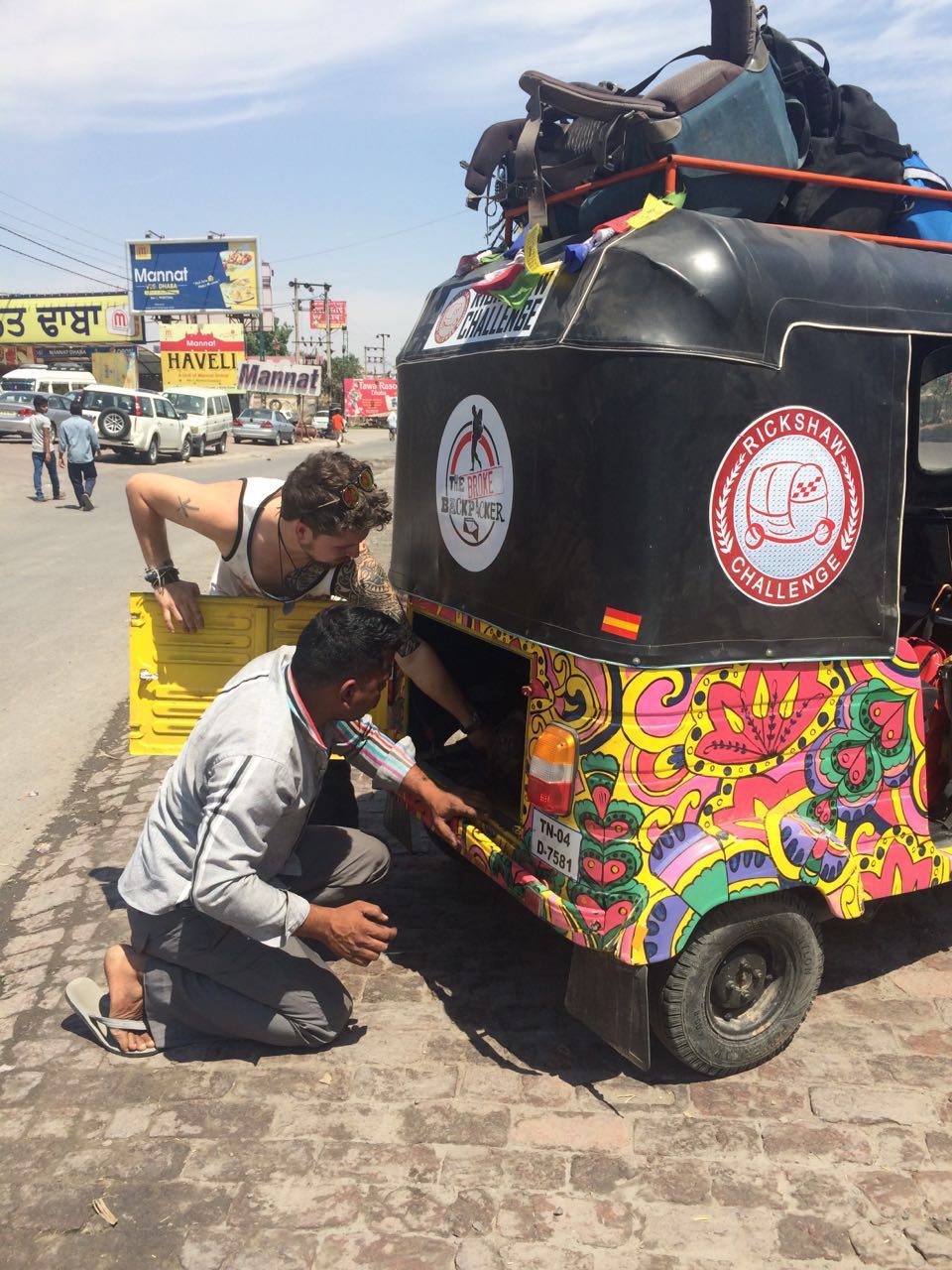 Will getting to grips with the engine.

Above all, though, what I took from this trip was how very hospitable, kind and generous strangers can be. During our trip we broke down on countless occasions, but each time complete strangers were on hand within seconds to help us push start, call a mechanic, or give us food, water, and shelter from the heat while we waited.

In one city a shopkeeper even closed up for the day so he could help us find a garage and a bed for the night before he called up his friend to take us out for dinner!

All of the major world religions give very clear guidance about the hospitality that should be bestowed upon strangers in your land, and the Indians rose to the occasion here. Maybe the sheer novelty of seeing foreigners driving a colourful Tuk-Tuk brought out the locals better nature. Or maybe it’s just that deep down, people are pretty decent.

Tagged
Hiking India
What did you think of this story?
Meh
Good
Awesome