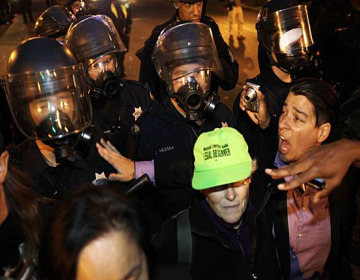 I HAD A different piece planned for today, but feel compelled to comment on the reaction to yesterday’s verdict in the Mehserle case in Oakland.

For those of you who haven’t heard about the case (probably most who reside outside of California), Johannes Mehserle, a Bay Area Rapid Transit (BART) police officer, shot from behind and killed Oscar Grant in an Oakland BART station on New Years Eve 2009.

The way we know for sure that Mehserle did in fact shoot an unarmed Grant is because the station was crowded with people who used their cell phones to capture the act.

Videos of the slaying were on Youtube within minutes, and the trial was moved from Oakland to Los Angeles to “escape heavy publicity” in the San Francisco Bay Area.

What was the verdict? Involuntary manslaughter, an “an all-but-unprecedented instance of a police officer being convicted for an on-duty shooting.” Of course for Grant’s family, who actually witnessed via video the act of their loved one being murdered, that sentence hardly feels fair. Mehserle’s family (and his defense), on the other hand, say it was an accident, that Mehserle thought it was his taser gun, and he was simply trying to subdue a frantic Grant.

Unfortunately, by most accounts, Grant had been cooperating with both Mehserle and another BART officer on the scene.

I don’t really want to talk about justice not being served, racism at work (you can guess who was white and who was black), or protection of law enforcement over protection of the people, which are all parts of this case.

I don’t even really want to go into how much hard work took place to create peaceful demonstrations in Oakland leading up to the verdict, which supposedly turned into a violent mob last night after the verdict was revealed.

I’m not sure it’s worth mentioning that I just received an email from a friend letting me know a calm, 60-something well-known civil rights activist that we used to work with got arrested as a part of that supposed mob, which makes me once again take the media’s slant toward carnage and brutality with a grain of salt.

What I do want to talk about is the deeper pain found in Oakland, and many other places, that appears to continue running along race and class lines. What if this truth is just not that?

Even SFGate (and officials) noted:

The main instigators appeared to be organized “anarchist” agitators wearing black clothing and hoods. Many of the most aggressive demonstrators smashing the windows of banks and shops were white. 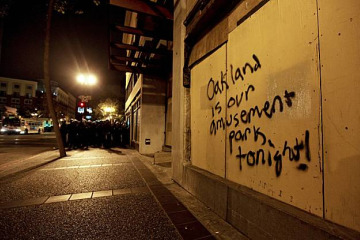 It appears to be the same young, mostly white anarchist group (ahem, not from Oakland) who threw rocks at Starbucks windows and lit things on first during the anti-war demonstrations I participated in from 2001-2006.

This is what the media also focused on then, not the hours and hours of peaceful walks or even the sittings that blocked traffic. Police brutality toward peaceful demonstrators was swept neatly under the rug because all could be blamed on the violence of this anarchy group.

But I see the falsity of the deeper pain running along race and class lines within communities such as Oakland. The anarchist group, supposedly fighting against racist decisions, has hurt local black-owned businesses in the past, just as much as corporate business (and this was the case again last night).

The peaceful demonstrators, on the other hand, were a mix of colors, sometimes loudly voicing their outrage at the verdict. I’m sure many of them felt a strong desire to move toward violence as the verdict was read. Yet they didn’t. Even Grant’s grandfather pleaded from a loudspeaker in downtown Oakland:

“Don’t dishonor my grandson’s death by tearing up Oakland. I know the verdict was wrong.”

From what I saw while I lived there, Oakland is increasingly desperate to become a community where people can walk side and side and not live in fear. Yep, there are some pretty bad people there (like everywhere), out only to get theirs (and what is that based on? Having been giving nothing to start with?).

But most people just want to be able to chill on their front porches, walk around downtown, and I believe heal the divide that has become the city’s nationwide rep. They want an end to the violence that’s hurting everyone, no exception.

To me, Oakland is just a tiny mark on the larger picture of our world and earth – in desperation for repair and connectedness. The question is, how do we do our best to feed reparation instead of continuing to feed destruction?

21 Images of Oakland We Can't Stop Looking At