The Kumbh Mela, believed to be the largest gathering of humanity on Earth, is a Hindu festival hosted every three years in a rotation of four different cities. The largest and most important iterations take place in Allahabad, India, at the Sangam, or confluence, of the Rivers Ganga, Yamuna, and the largely mythical Saraswati.

In January-February of this year, I found myself in a tent on the banks of the Sangam for a full month of the 55-day Mela, volunteering for an NGO working to clean up India’s rivers. Two months on, I still haven’t managed to get my head around this crazy / beautiful gathering of somewhere between 30 and 50 million people of various Hindu faiths. The following are some of my impressions. 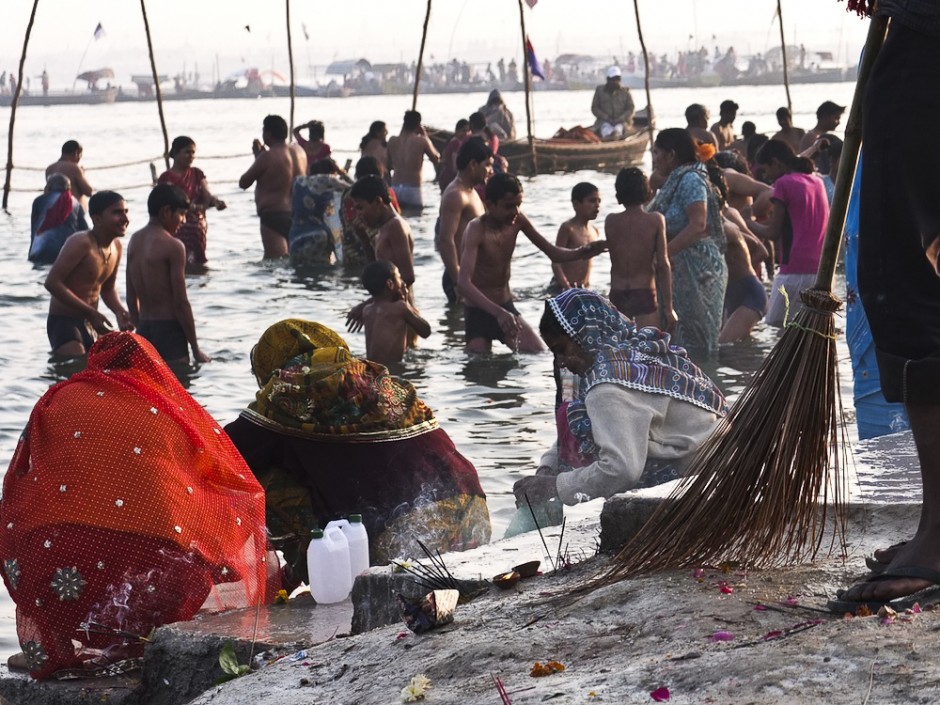 The reason so many millions of people travel from all over India and the world to the Kumbh Mela: to bathe at the Sangam, the confluence of the Ganga, Yamuna, and mythical Saraswati Rivers, on one of the auspicious bathing days, when the river is believed to turn into the nectar of consciousness, removing negative karma and increasing one’s chances of enlightenment in this lifetime. 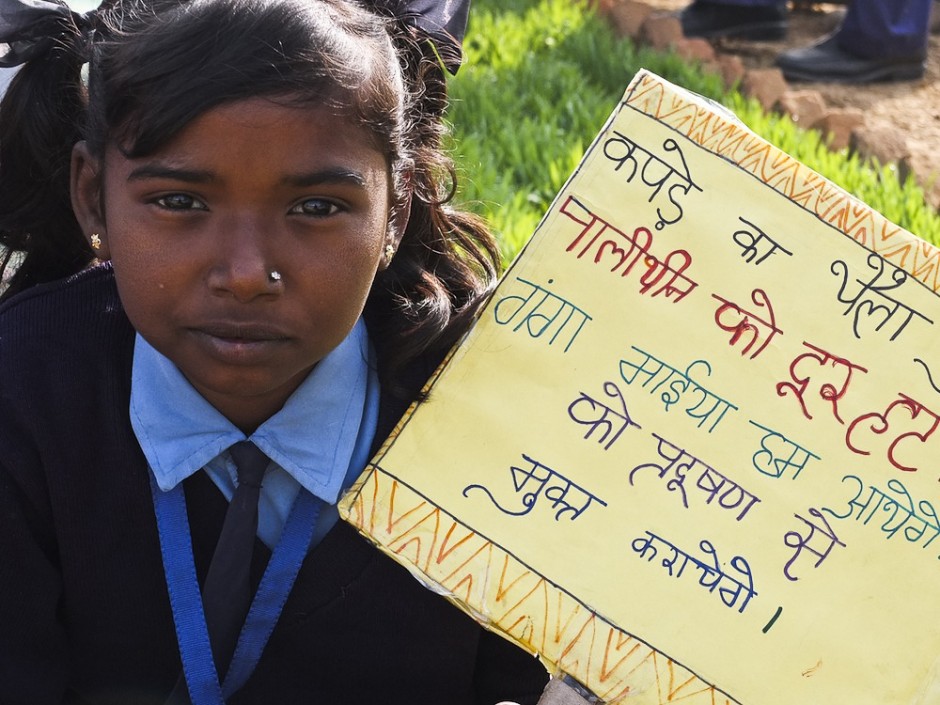 This schoolgirl was one of over 5,000 students who attended a rally in support of cleaning up India’s rivers. Her poster reads, “Use cloth bags and get rid of polythene. By this effort, we can save the Ganga.” Plastic pollution is one of the biggest problems facing India’s river systems and India in general, but changing behavior in a country with a population of 1.3 billion is a mammoth task. 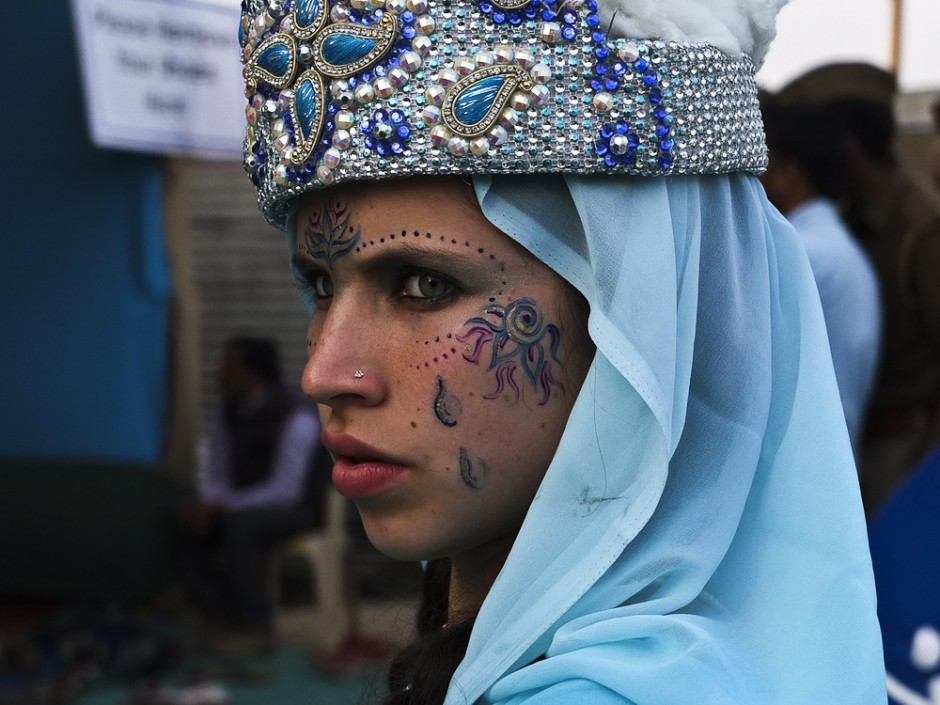 One of a group of Vaisnava volunteers who traveled from Vrindavan with Swami Paramadvaiti. My previous experience of Hare Krishnas, as such groups are commonly called, was limited to being woken up by knocks on my door early on Sunday mornings by enthusiastic preachers. After a month spent working with and making friends with this group, I was touched and impressed by their work ethic (constant), their faith (immense), and their kindness (endless). This girl spent six weeks at the Mela dressed in a beautiful costume as Ma Ganga, appearing tirelessly at every event and helping attract media attention and increase environmental awareness throughout India and the world. 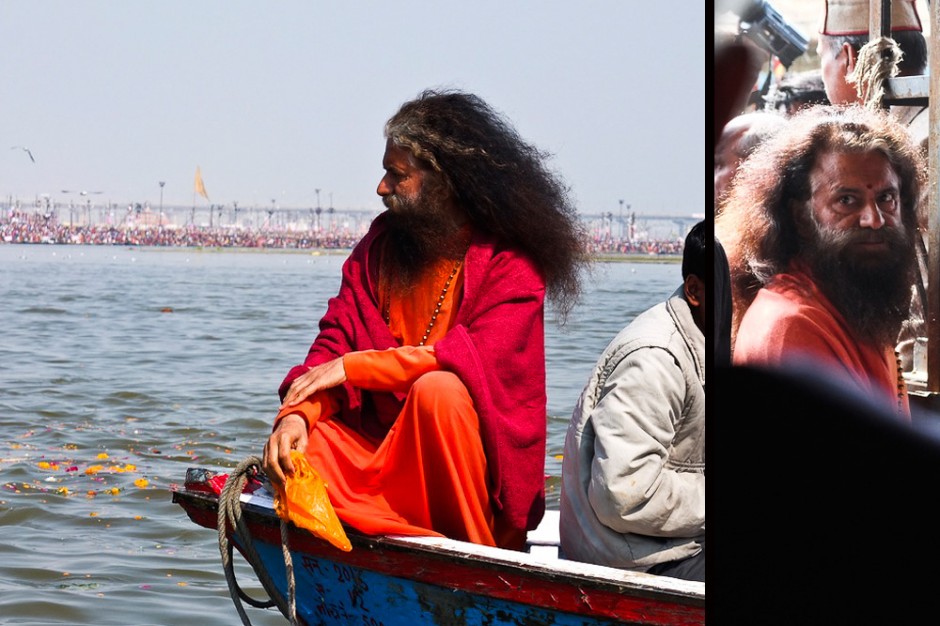 Pujya Swami Chidanand Saraswatiji caught in rare moments of stillness, on his way to one of the hundreds of events he organized, chaired, and spoke at during the Mela. This man, the head of Parmarth Niketan Ashram in Rishikesh, worked tirelessly for over six weeks at the Mela to raise environmental awareness throughout India. I am not a devotee, but I have never seen a person use their position of power (Pujya Swamiji is probably the most influential Swami in India) for such good, and with such an approach of acceptance and non-sectarianism. Religious leaders the world over should take note. The first photo shows Swamiji as I usually saw him – a vessel of composure in the midst of a scrum of media, devotees, and Rishikumars (Vedic students living at the ashram). The second shows him collecting rubbish on his way between the shore and the Sangam – practicing what he preaches. 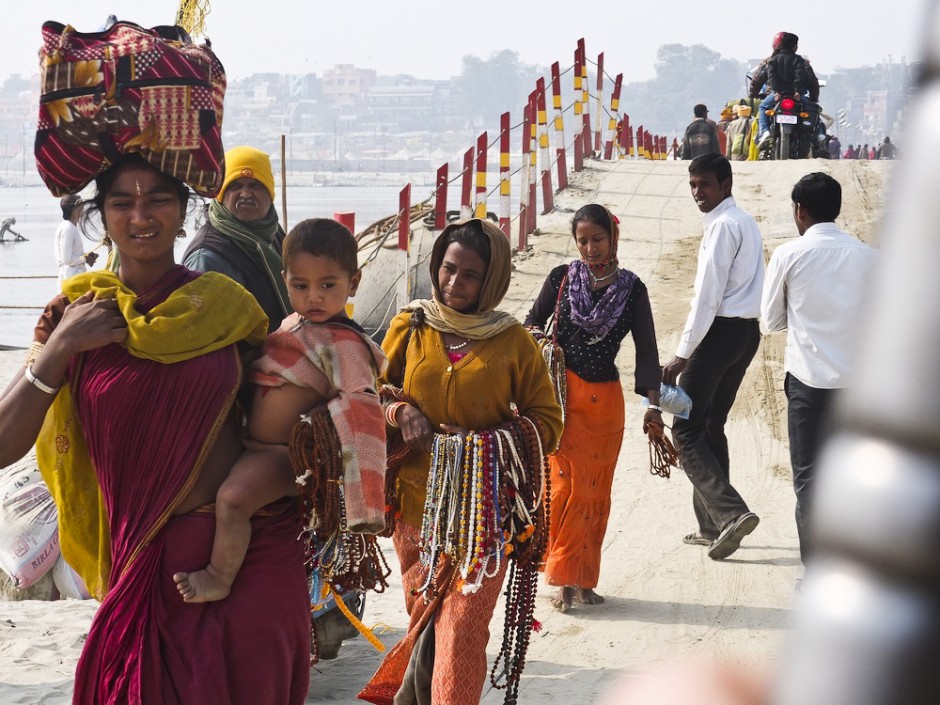 Taken from a rickshaw crossing one of the many temporary bridges built in the Mela camp grounds to allow pilgrims to move between campsites and to the bathing sites. This photo came in the context of massive upheaval in Indian society and politics, precipitated by the horrific gang rape of a young woman in Delhi in December. As a young woman traveling alone in India, I can attest that the treatment of women leaves much to be desired. Although my worst experience was being surrounded by men and manhandled at a train station by myself, many foreigners traveling in India experienced far worse assaults. Assault of Indian women is usually either behind closed doors (domestic abuse) or goes unreported, as the shame of rape outweighs the desire for justice. 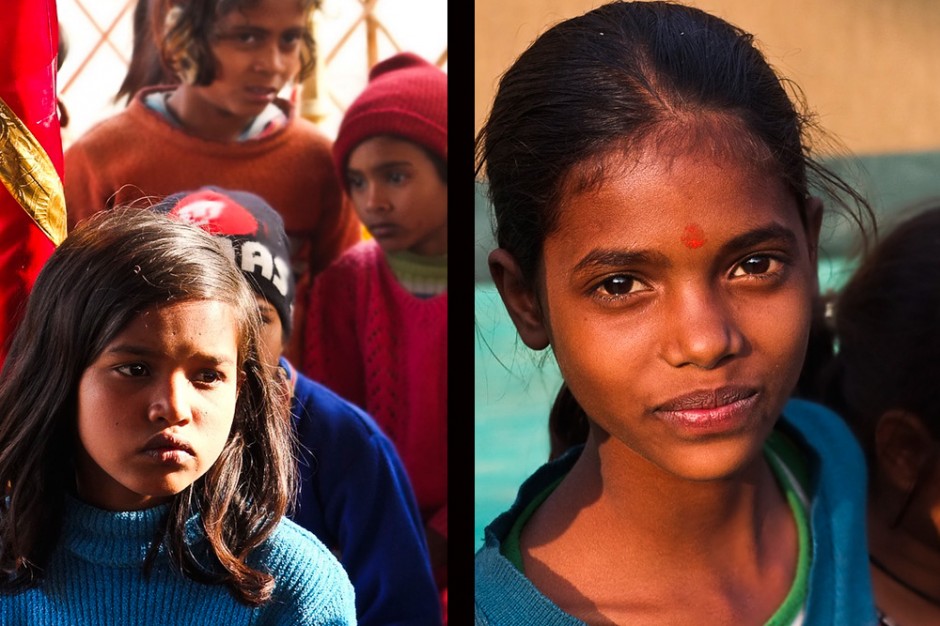 These girls were part of a celebration of the girl child, an initiative attempting to counter the horrific practice of female infanticide and foeticide prompted by the low perceived value of female children. This practice is particularly prevalent in the poorer states of India, such as Bihar, because of outdated dowry laws and a belief that women cannot support themselves financially. The practice has led to massively unbalanced gender ratios (as low as 700 women to every 1000 men in some states), which leaves many unmarried men and perpetuates sexual violence against women. 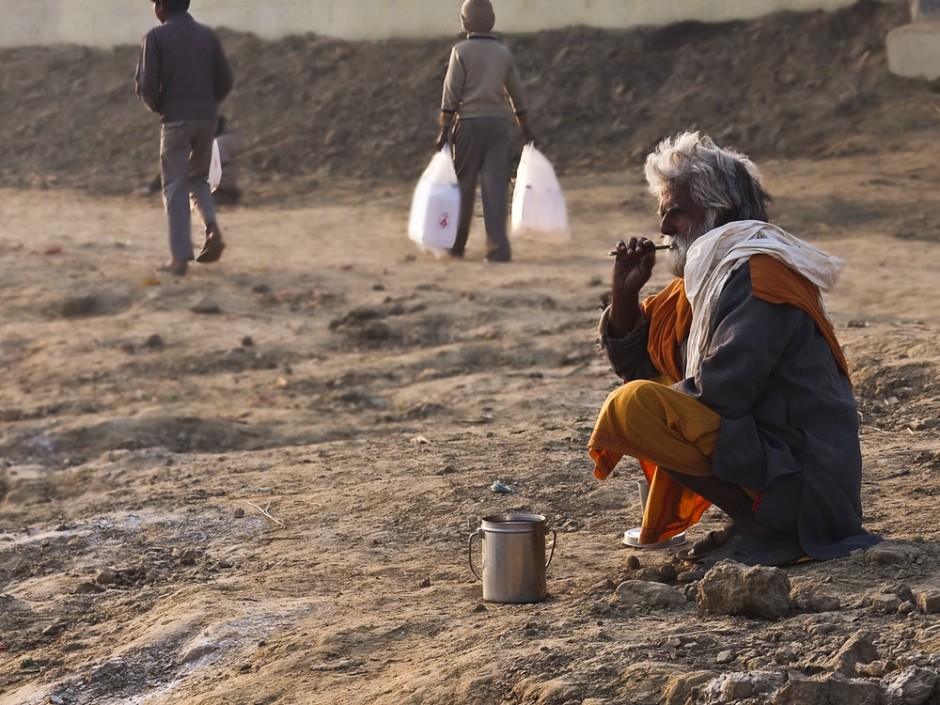 This man was brushing his teeth by the banks of the Yamuna River with a neem stick early on one of the main bathing days at the Mela. His use of natural, biodegradable neem and a tin tiffin box (that he’s probably used his whole life) is contrasted by the men in the background carrying plastic bags filled with polystyrene. If the world’s rivers are to sustain its population much longer, people will need to return to old ways of doing things – slowly, sustainably – and make plastic a thing of the past. 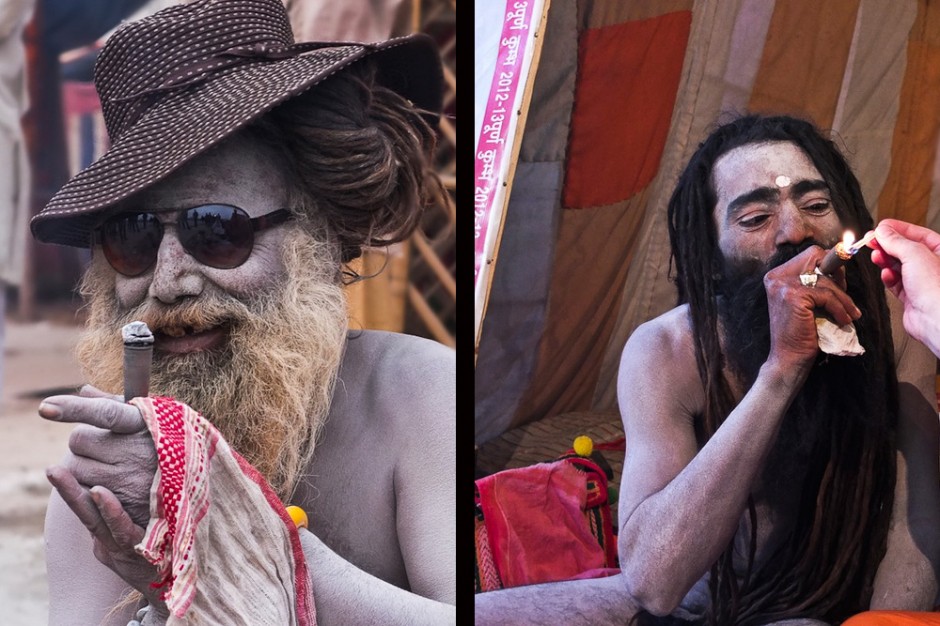 These “naga babas” are a type of sadhu, a Hindu ascetic monk who has renounced the material world for an itinerant life of yogic practice – meditation, devotion to particular deities, fasting service. They smear their naked bodies with ash to symbolize the cycle of birth and death, and devote their lives to achieving moksha, or liberation. Sadhus are often found smoking chillum, a potent concoction of charras, or marijuana, which is associated with Shiva – and which they are more than happy to share with devotees and curious foreigners. Divine connotations aside, a sadhu’s diet of “chai, chillum, chapatti,” with the occasional hint of opium, leaves many nutritionally deficit, with chronic lung issues and rotten teeth from the tablespoons of sugar in every cup of chai. The first naga baba has a sense of humour and adorns his jata (dreadlocks whose length commands respect, indicating his length of spiritual practice) with a hat borrowed from a foreign press photographer. The generosity and good humour of most sadhus makes it easy to spend whole days sitting around their fires, drinking chai and being fed, pretending to understand each other (few speak English) and laughing at endless misunderstandings. 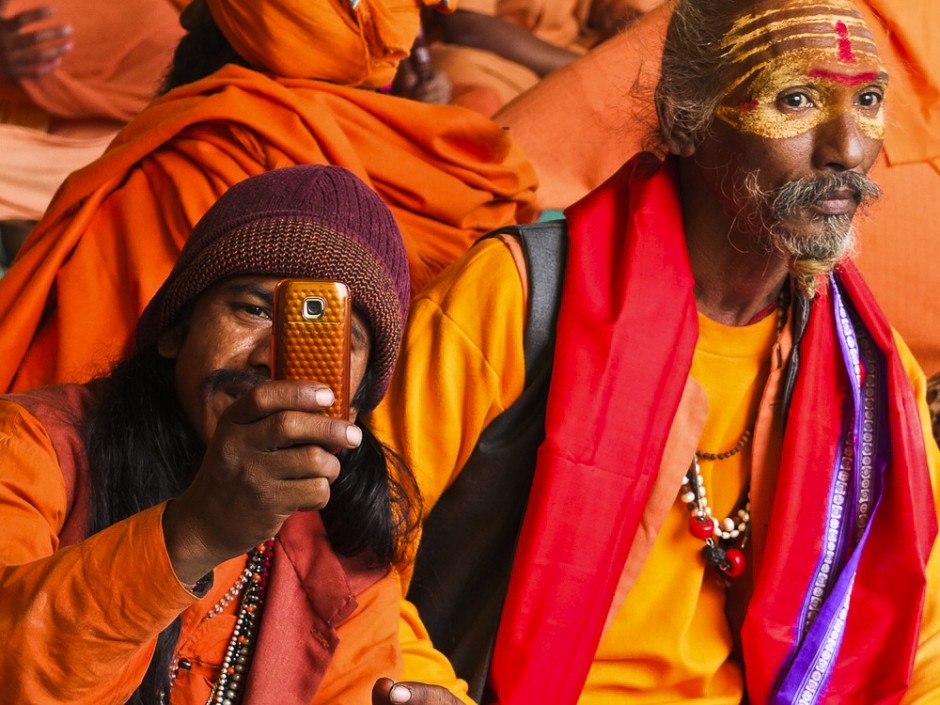 Like spiritual practitioners the world over, sadhus must reconcile their practice with the interference of globalization and the temptations of the material world. Many a modern-day sadhu wields a smartphone, often used to take photos of strange-looking foreigners like myself. 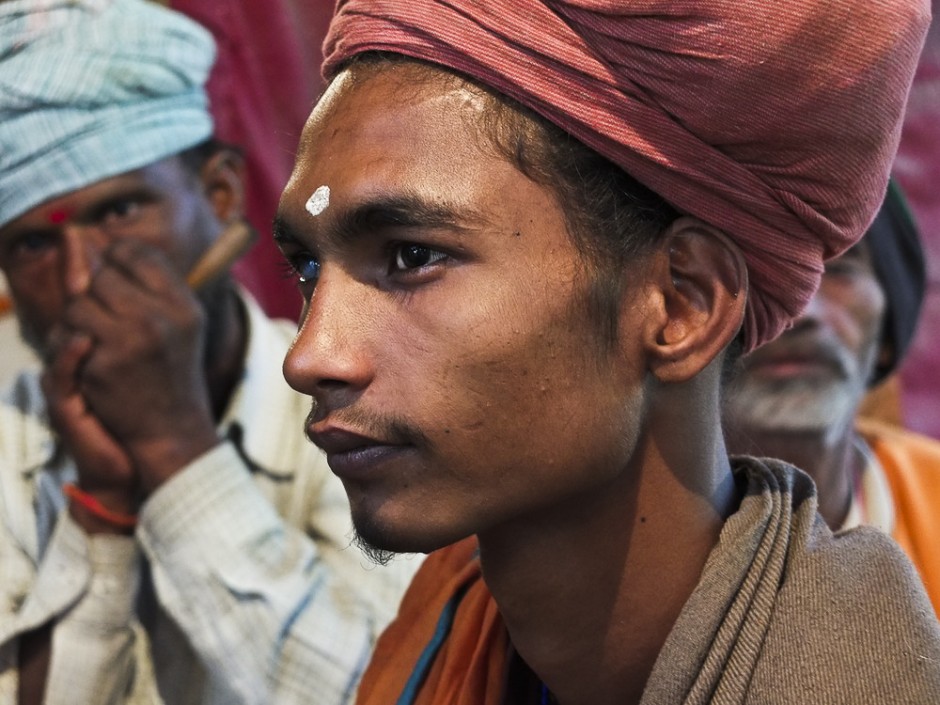 Poor medical care and nutrition leaves little hope for the healing of sadhus like this, afflicted with a form of cataract blindness in his right eye. 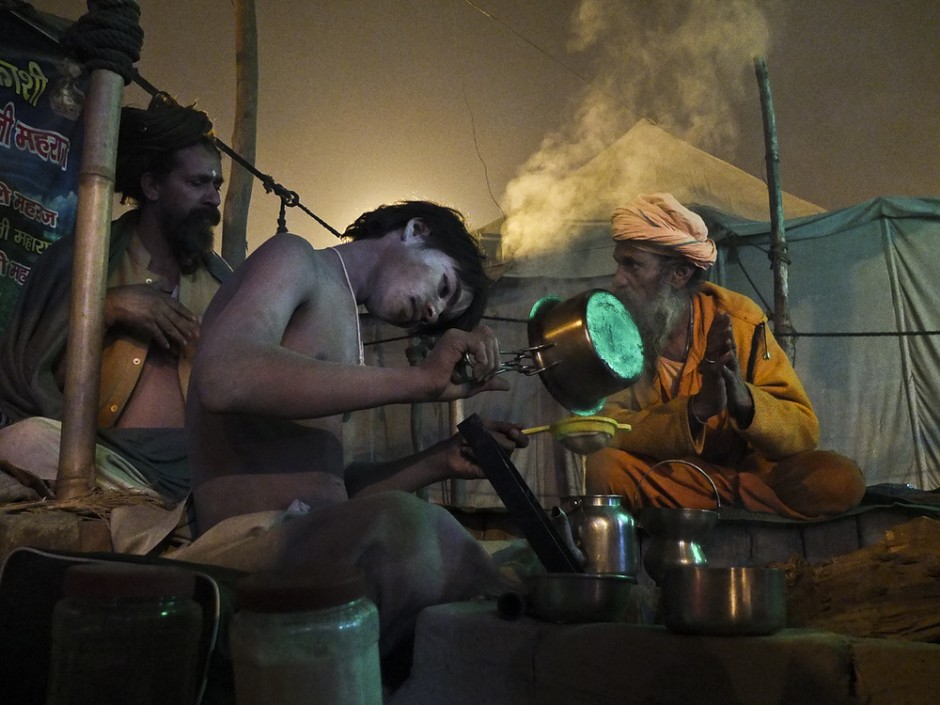 This naga baba is young, around 15, and was initiated into the order around age 10. Young sadhus are often given to their “gurus” by families who cannot support them, leaving them to be prepared (largely by service to their guru) for a life of spiritual practice. Such young recruits often remain illiterate, with their traditions being passed down orally, and receive no conventional schooling. By the time they are old enough to think for themselves, their livelihood is so dependent upon the akhara (the association which administers their particular sect of sadhus) that they have no choice but to stay.

Tagged
Festivals Galleries
What did you think of this story?
Meh
Good
Awesome

Kumbh Mela: What I Found in the Waters of the Ganges