I once had a university professor who I will describe as “mentally diverse.”

She was my favorite professor, although you never knew when the light was on, off, or just catastrophically-flickering as in Poltergeist.

Full of prophecies which would make a Buddha cry, she managed to turn my reality upside down like milk in a butter-making jar, shaking me from solid form, into a frothing mixture of wild ideas, random plans of action, and, well, “mental diversity.”

I am forever grateful.

This is because with the help of Edward Soja, she divided the world into three parts: one of reality, another of imagination, and something else she simply called, “real-and-imagined life”, a sort of hybrid of the two.

Initially, I concluded that she was either on drugs, or completely barking mad, until the third class, when, finally, I got it. With her help, all of my travel experiences, particularly my last four years as an expat, have become real-and-imagined journeys of the mind.

My life has happily gone from black-and-white into complete Kodachrome chaos, with all of my thoughts, in all their diversity, blinking and flashing like Asian lights in one big mutating rainbow.

Allow me to explain. Edward Soja, in rambling on about Los Angeles and Foucault in a completely convoluted book you never want to read, called Journeys to Los Angeles and Other Real-And Imagined Places, proposed the idea that what we think about our reality is just as important as how it’s seen in “the real world”, a space coded with (often unfair) social and political ideas.

As living, breathing, thinking people of this world, we are, however, in the grand position to reinvent a few things.

As the products of this whirlwind, we exist in an inner-outer predicament, where our own thoughts are as crucial as the rules imposed upon us. We have the power to think, and make the required changes, like fashion designers with a pair of scissors and an idea for a great pair of pants.

As living, breathing, thinking people of this world, we are, however, in the grand position to reinvent a few things.

In 2003 I began my four years in Chongqing, China, where I was introduced to the vocation of English-selling, or in “real world” terms, English teaching. I spent a full twelve hours a day in crass amounts of pollution and construction dust on the brink of the Yangtze river demonstrating to Chinese children everywhere in the city, that my language and culture was a product to be sold.

Some people would call it colonization, or just global economics. What better product to sell to an upcoming global superpower? In fact, in every speech I had to make for the company during my unpaid after-hours appearances as an English peddler on TV stations and radio, I had to repeat the words, “China Superpower”.

I couldn’t help but ask myself, after five years in a social justice program at university, what the hell was I doing? Making money? Having a cultural experience? Or having an out-of-body medical experience?

From Punk to Police 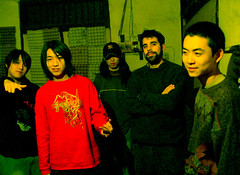 My lungs were so filled with coal dust, I could hardly keep myself out of the hospital and off the antibiotics the nurses gave me time and time again, just to make sure that my immune system would never, ever return.

Looking back, I loved China. It’s hard to believe, but even in those moments of pulse-crushing, heavy, oppressiveness, I saw at least some value in what I was doing, for myself and for others.

During my time there, for example, I had the opportunity to explore the New Wave Metal punk scene, in which Chinese youth were dispersing the counter-culture spirit of an emerging generation while rejecting the gaze of communist eyes.

Even young women, layered angry voices on top of “The People’s Republic”, pounding out the sounds of punk-rock rebellion with second-hand drums in abandoned warehouses, in the city that never slept (or just slept with one eye open).

Young men took Nirvana’s grunge fury and made it their own, beer-belching their way to imagined stardom. If complacency was the image that the West (or the Chinese government itself) wanted to imagine for a fast-developing China, this reality did not fit the mold.

At work I met many people who were afraid to talk about Chinese politics. I did not even attempt to start a political conversation with them the whole time I was there, for fear that it would endanger one of my friends, coworkers, or acquaintances. Instead, I let them come to me if they had something to say.

At one point, the communist police searched our apartments on the premise of “maintaining safety”.

At one point, the communist police searched our apartments on the premise of “maintaining safety”. We were interviewed on the spot about what websites we were accessing, why, and whether or not we were religious, and if so, to which group we belonged.

There was never any explanation given for this inquisition. Yet, beneath this curtain of regulation, there were plenty of unregulated moments.

People went on with their lives, making miracles in study, business, and family life. One of my Chinese coworkers, who wanted to become a UN representative, provided me with a thoughtful conversation about how as “women of the moon”, we have a special power to shake up the forces that be, not by bowing to them, but by nurturing the world. 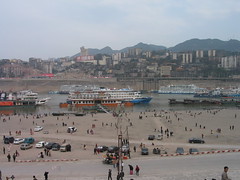 Thoughts like that, which seemed to jump out of nowhere, must have come from somewhere, lurking like revolutionary dreams in the underbelly of a repressed society.

And what better way to prepare yourself for a revolution, than to speak the language of your oppressors? Armed with Chinese and English, ambassadors for a New China, the willing adults, became empowered to more fully speak their minds.

I helped them, but they did most of the work.

One of the fastest pathways to change is to make oneself able to be heard. I hope that one day this happens full-circle, for those who wish to escape the gloom of any kind of slavery, whether in China, Canada, or elsewhere in the world. First, we must be able to understand each other.

Travel then, is about moving towards understanding, or at least it should be. We leave many gratuitous marks on the planet, wherever we may go, whether it is through our stubborn attitudes, the waste we make, or in the people we sometimes force our language and culture upon.

Travel can be good and travel bad, but I know that in my real-and-imagined life, my experiences attempt to interact with, and redirect, the rip tide of forces that govern us. In this sense, the spirit of people, and the spirit of travel, need not be lost on anyone.

Emily Hansen is a travel writer and teacher based in Shimla, India, where she is working on a book about her experiences as an expat. Her native land is Canada, and she has traveled to over 30 countries, and has lived in six, including Germany, China, Korea, Thailand, Taiwan, and now, India.
Tagged
Culture Activism
What did you think of this story?
Meh
Good
Awesome