I was flattered to be selected for the Adventure Center travel scholarship, but hadn’t considered the possibility of being at the mercy of strangers and a set itinerary for two weeks. I have friends I wouldn’t even travel with and now I was agreeing to two weeks in Cuba with strangers? And a roomie? I pictured a big bus packed with dawdling tourists, too much luggage and lame dinners spent stuck together like mismatched wedding table guests.

I was reluctant for a reason. In 2010, in a bid to ensure I would get the permit to see the mountain gorillas in Bwindi, I booked onto a group tour in Uganda. Our crew was a toxic mix right from the get-go. The lone Quebecer and a moaning Californian were like rutting deer, keeping their distance and avoiding eye contact. And then there was the old man from middle America who skipped breakfast to claim the coveted front seat of the van each morning. His introduction turned me off quicker than sour milk: “Name a place and I’ll tell you that I’ve been there.” How to not win friends and not influence people.

Maybe this time I would get lucky.

Due to an indirect flight via Panama, I arrived late and last to the Hotel Caribbean in Havana, where the tour would begin. I was holed up in the hotel drinking $2 Cristal beer, trying to get an internet connection as locals puffed on Lucky Strikes and sang along to Enrique, when my group barrelled in from dinner and the trip debrief. As we swapped handshakes and holas, I became more aware of my apprehension. It felt a bit like a blind date. A really intense 10-day blind date with 6 people.

And we didn’t have diarrhea on the same days, so this made things less complicated.

I’d be bunking with a punchy Brit named Jacqueline who managed to stuff all her gear and five pairs of shoes into a small pack that I might use to take my lunch and a book to work. Jacqueline was a Bridget Jones doppelganger, eager to laugh and — as I’d learn over the next two weeks — game for anything: fire eaters, live snake shows, spontaneous road trips to the beach, or another Cuba Libre.

That first night, backs turned politely while we changed into sleepwear, neither Jacqueline nor I could do the math to figure out the local time. I rang the front desk to inquire but the surly receptionist thought I was crank calling. She eventually barked that it was 11:45pm, and after we’d set our alarms and synchronized our watches we both passed out to the drone of the ancient air con.

Over a paltry hotel breakfast the group got acquainted. Distracted by the conversation, I’d inadvertently been wolfing gobs of crumbled butter, mistaking them for scrambled eggs. Turns out Francis, a gentle and agreeable Brit who could be relied on to instigate morning mojitos, had made the same mistake. Our group was rounded out by a couple of Aussies, good humoured best friends who were travelling together. By the end of our meal, I realized I genuinely liked them. This group thing could work.

Consensus was that our guide Leo was Cuba’s best ambassador. I wanted to put him on Jeopardy. “Cuba for $1,000, Alex!” He couldn’t be stumped in any category: history, birds, culture, cocktails, Che, colonial architecture. With Leo at our beck and call we had a translator and negotiator, and the touts (mostly) gave us a wide berth. We saved cash by splitting cabs to the beach and paid near local prices for street snacks and souvenirs. 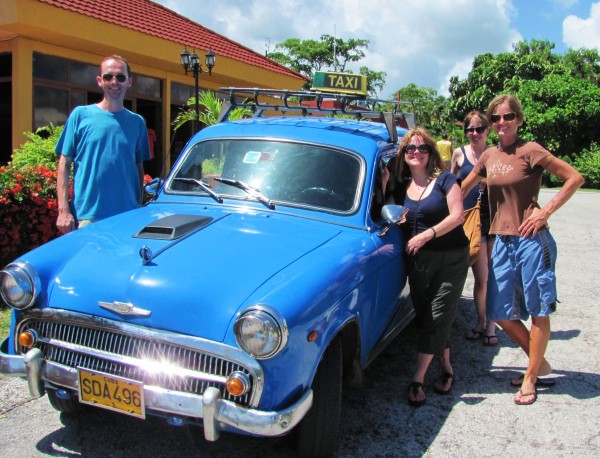 Instead of lonely navigation and dinners empty of conversation, group travel offers a social infrastructure. There’s ample time for solitude and self-directed exploration, but also a ready team for chatting and cocktails.

And having a roomie? It was far less taxing than I’d imagined. As I discovered later in the trip when we were put up in a room with air con that didn’t run like an idling diesel truck, Jaqueline didn’t snore. And we didn’t have diarrhea on the same days, so this made things less complicated.

In the end, after travelling via plane, van, bus, horse, rickshaw, and tiny Mr. Bean-ish Manx cabs, we were all reluctant to part. We had experienced 10 solid and influential days together (weathering a near hurricane even), and our chemistry-laden blind date was ending.

Thanks to Facebook, we can continue on where we left off, vicariously traveling with each other still, minus the $3 mojitos and shared bathroom.

6 things to consider when booking a group tour

1. You’re probably good with sharing stories, but sharing space? How about two weeks with a roomie who might surreptitiously use your toothpaste, snore like a bear, or demand that the hotel room air con be set to “Glacier”? If you’re willing to pay a single supplement (rates vary among companies), you can buy some privacy.

2. Being part of a group means you’re not alone. Even the most intrepid traveler is bound to forget something (alarm clock, SPF 30, Immodium) or need something (charged batteries at a pivotal moment). Maybe your credit card will be rejected at the only ATM machine in the city. This is when you can lean on your group members.

3. Be sure to establish ground rules early. Unless you want to haggle over every bar bill, ask your servers up front for separate checks.

4. Similarly, it’s worth discussing tipping with your group. Tour companies will offer guidelines for tipping your guide, and though your gratuity can be anonymous, fostering consensus within the group can reduce friction.

5. Check out the tour itinerary before you book and ensure you’re not logging more hours on a bus than off.

6. Ready for a group tour? Spontaneous travellers can benefit from last-minute sell-offs of up to 20% through companies like Adventure Center. Sign up for weekly email notifications and be open to unexpected destination deals from Africa to Alaska.