View all travel news
Top Countries
Top CitiesView All Destinations
Trending Regions
Trending Cities
Load More
Shana Dressler shares photographs of the embodied divine from religious ceremonies and festivals around the world, as well as tips on how to shoot scenes like these.

I GRADUATED WITH A DEGREE in Medieval and Renaissance Studies from Vassar College, and also spent three years studying graduate-level comparative religion and anthropology at Columbia University, and photography at the International Center of Photography. I was fascinated by Africa, Southeast Asia, and the Far East, and my gut instinct told me that if I wanted to understand the cultures there, I should learn about the religions first.

I studied the Abrahamic religions, Buddhism, and Hinduism. In my anthropology classes I learned about the esoteric branches of these religions, and then was exposed to religions of the African diaspora, such as Santaria, Candomblé, and Vodun. I was fascinated by the vintage footage of masquerade dances, and by the old black and white photographs from photographers like Pierre Verger, and contemporary photographers like Phyllis Galembo. I was curious about these “embodied” experiences of the divine.

I began a photographic journey to document such experiences, where I’ve shot festivals and ceremonies as far afield as Brazil, India, and Papua New Guinea, as well as in the US. 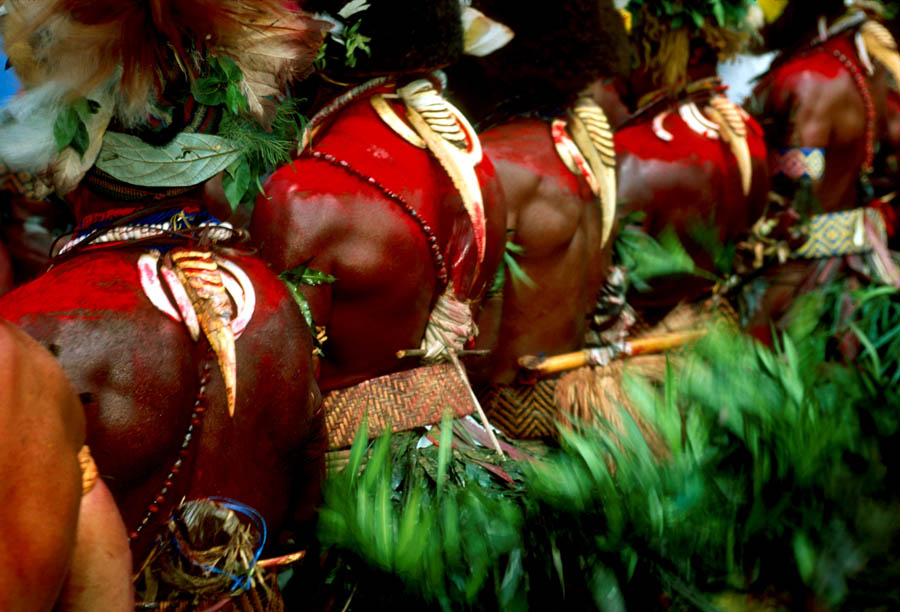 Because this performance was public, I didn't have to spend time getting to know the dancers in order to build trust. But in many remote places you will have no access to the most interesting ceremonies and religious festivals unless you spend time building relationships. Lots of people who live off the beaten path do believe that if you take their picture you will capture their soul. Sometimes people will bend the 'rules' for you because of that connection you've made over time. In this photo I wanted to communicate movement, so I chose a longer shutter speed and low ASA film in order to capture this look in mid-day sunlight. 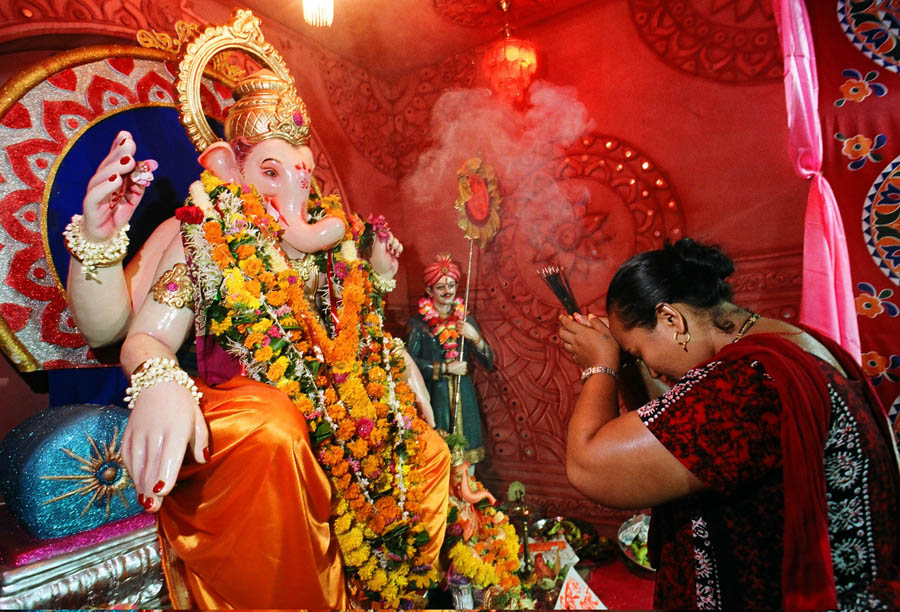 When you cover religious festivals or rituals that have an element of secrecy because they are looked down on by the official religion of the country, finding someone to introduce you into the community is key. During my multimedia project on the elephant-headed Hindu deity, Ganesh, I wanted to show how Ganesh was worshipped by the most wealthy to the most poor. My friend Sudharak Olwe knew someone who lived in the red light district of Mumbai. Because tripods can be both cumbersome and distracting, I almost always shoot interiors using 800 ASA film, which if needs be I can push to 1600. 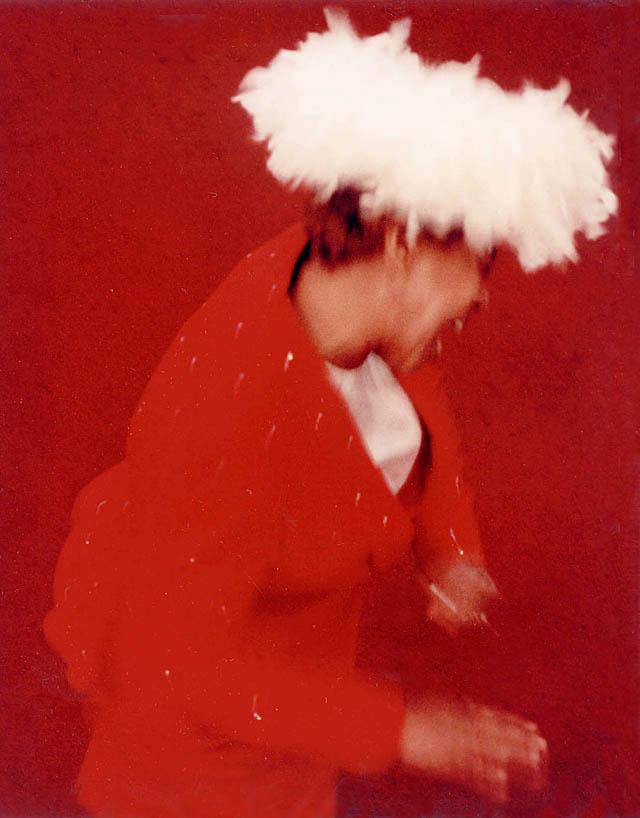 In 1995 I began what became a long-term photography project called The Spirit That Runs Through The Holy Tabernacle Church. This is a photograph of the wife of Pastor Carl J. Graham, who in 1974 founded the Pentecostal Holy Tabernacle Church. Mother Shepherd Graham is known as "the dancer." When she felt moved by the Holy Ghost she would leave her chair, walk in front of the altar, and begin dancing. To give the sense of her experience of the Holy Ghost I used a slow shutter speed with a flash. The slow shutter speed allows for ambient light to blur motion while the flash gives crisp edges to part of the image. 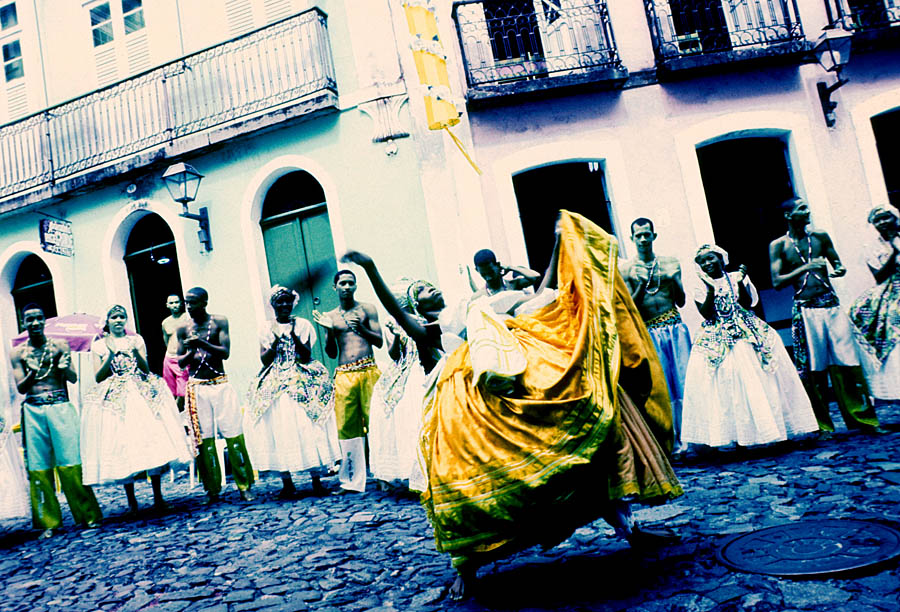 Candomblé dance in honor of the goddess Yansã - Brazil

Candomblé is practiced in Brazil and has its deepest roots in the northeastern state of Bahia, on the Atlantic coast. Like Santaria and Vodou, Candomblé is a syncretistic religion. These religions share the gods and goddess of the Yorùbá, Fon, and Ewe peoples of West Africa, who are often prayed to under the guide of the corresponding Catholic saints. The goddess Yansã is the counterpart to Saint Santa Barbara. At this point in my investigation of embodied experiences I was also experimenting with infrared film. There’s a quality to the colors that creates a feeling of otherworldliness. 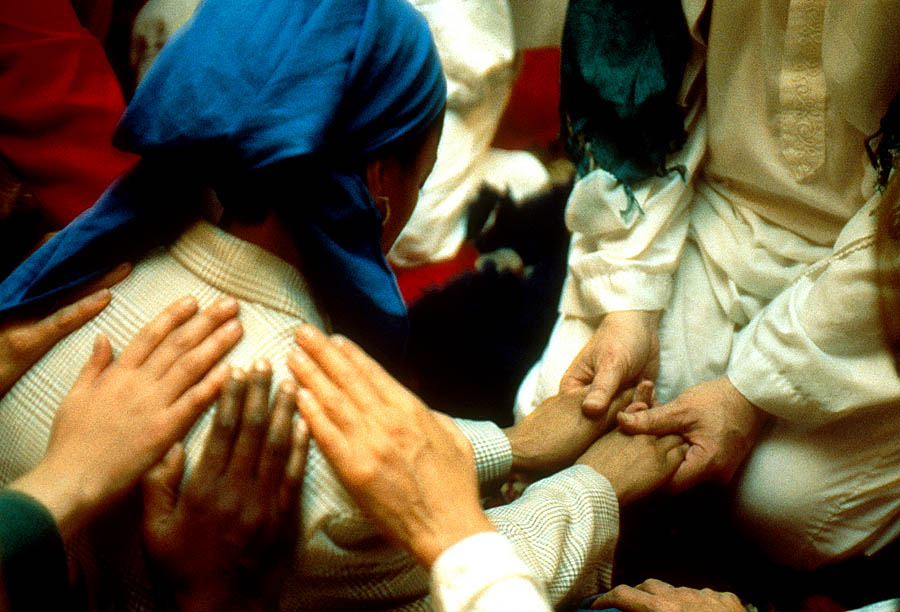 I told the sheikh of the Sufi community in Tribeca that to take the most interesting pictures I would need to get close, and asked him to talk with members of the congregation to see how they felt about this. It's important to get permission not just from a group's leader, but from all the subjects involved. I'm sure the intimacy of this photo has everything to do with my proximity. As well as getting close, it's best to use a fixed lens. I found that a 28mm gave me the most versatility. I'd even say that a zoom is never appropriate for photographs of religious or spiritual ceremonies. Get as close as possible so you are a part of the experience and can really feel - and therefore better represent - what is going on. 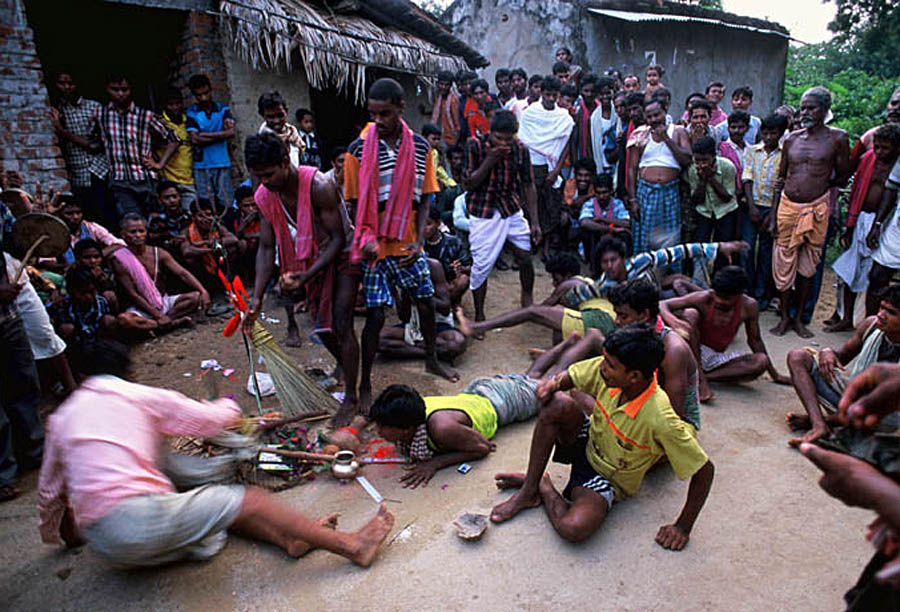 In 2007 I traveled to Orissa to experience the Ganesh festival in a rural setting which still engaged in old traditions and rituals very different than anything I had seen before. The first day of the festival in the town of Sambalpur starts with a snake possession ceremony. Bad roads meant I missed the ceremony, but when the chief saw how disappointed I was he let me know they would recreate the ceremony for me. I told him I didn't want them to do anything that was inauthentic. He looked at me as if I had said something very strange and explained that they could do the ritual, just not with the snakes because they had all slithered away. 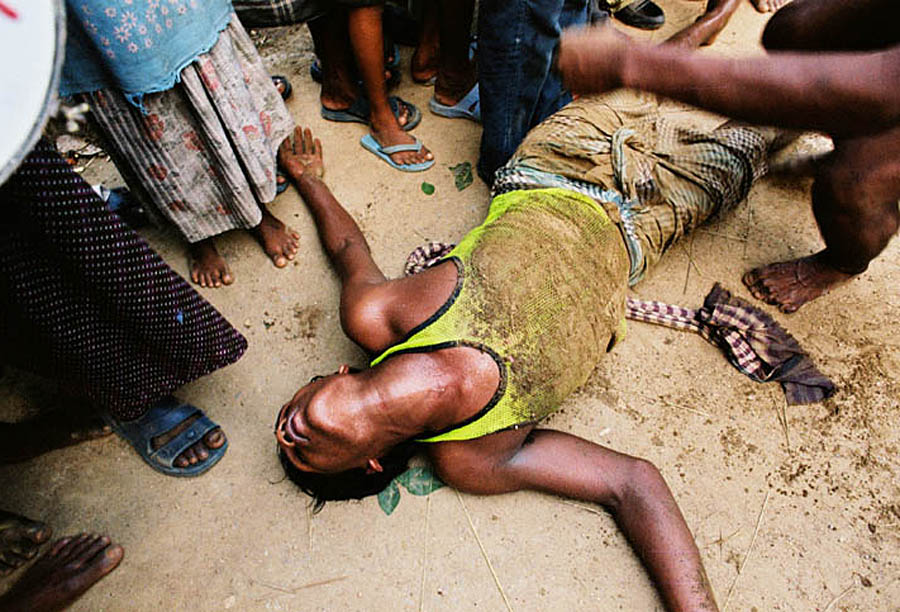 Here I captured the moments after this young man came out of his trance. I had witnessed him slithering around the ritual area and sparring with other young men as if he were a snake. 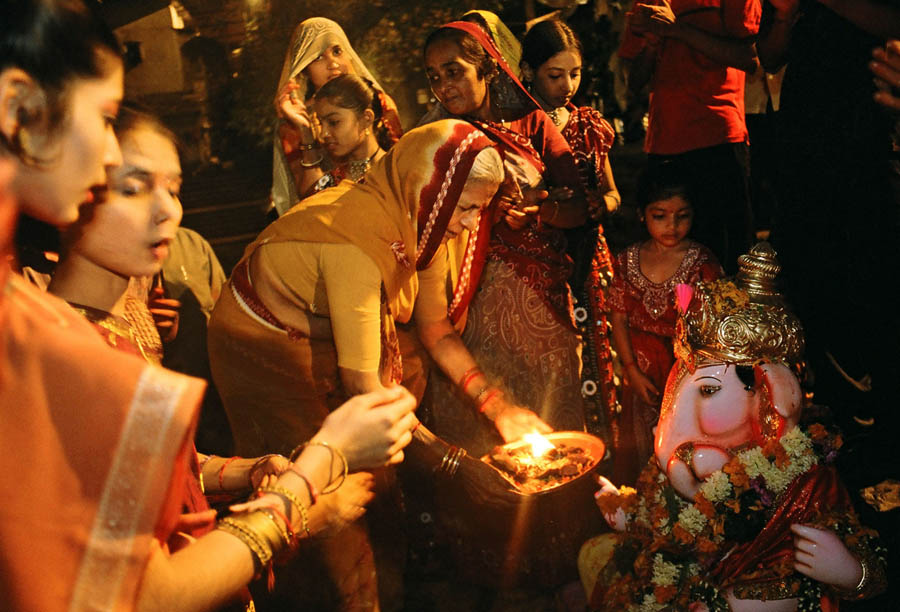 At the beginning of the festival Hindus mount a statue of Ganesh in the home. Through prayer and song the spirit of Ganesh is invoked into the statue, which is then viewed as God himself. At the end of the 10-day festival a final ritual removes the spirit so the statue can be submerged into water. Here is the grandmother of a Gujarati family circling a plate with offerings and a candle in front of Ganesh. It is essential to ask permission to take photographs before such an intimate moment. In the case of women you often need to ask the husband. This has been strange and sometimes uncomfortable for me, but it is important to respect the culture in which you are a guest. If you want great photographs, access is key. 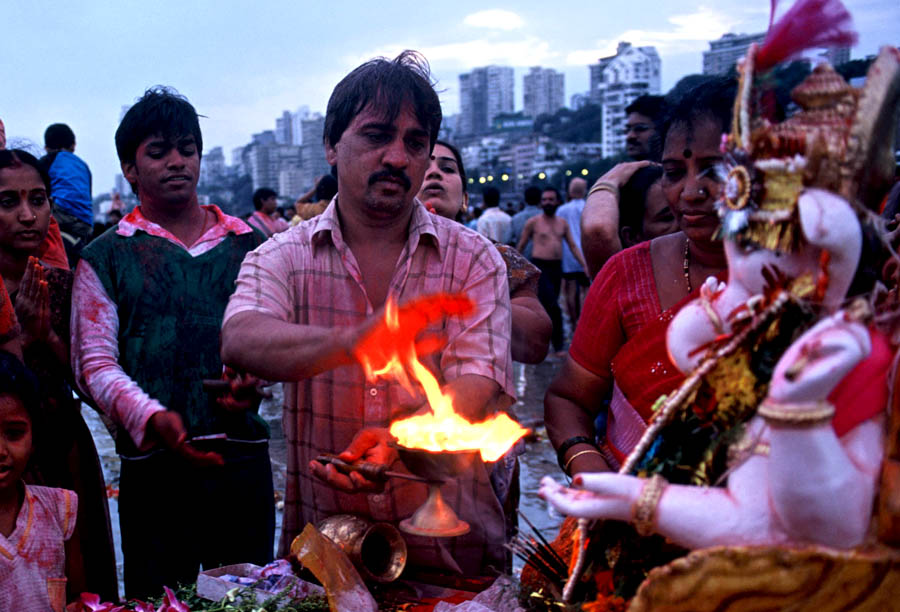 As well as the intimate ceremonies you can witness in homes on the last day of the festival, countless poojas are conducted by families, friends, and communities on the public beaches on the shores of the Arabian Sea. This photograph was taken at dusk, using 800 ASA film and a slow shutter speed so that I could capture as much ambient light as possible. I can't explain how this image came out as it did. Part of the magic of photography is not only being at the right place at the right time, but also being in sync with your subjects. This was just one of those mysterious moments. 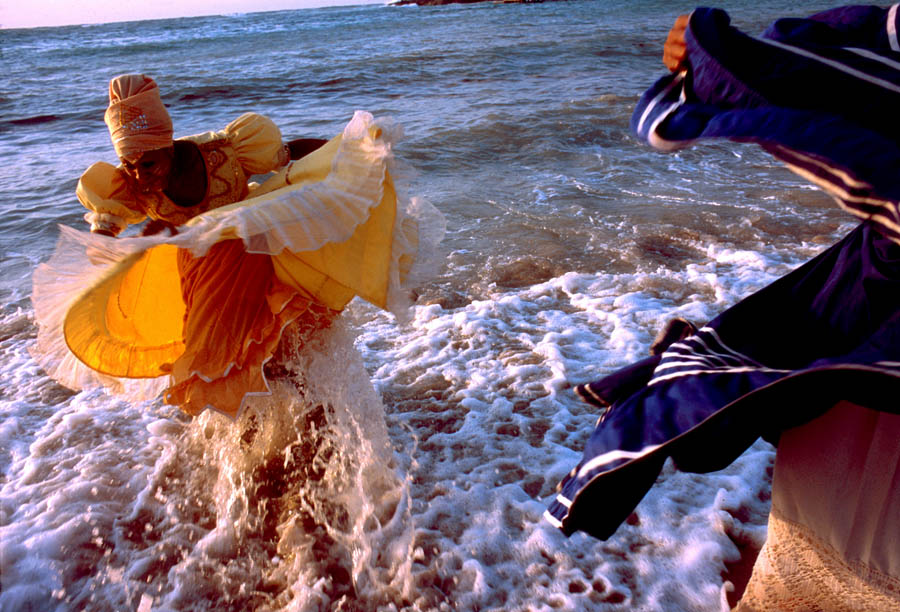 Ochun, the goddess of rivers, dancing in the Caribbean - Cuba

In Cuba you can see signs of the underground religion Santaria if you know what to look for. Because it is highly unlikely that tourists will ever see a real ceremony, some venues organize performances so you can see the dances of the Orishas, or Gods. Like in Candomblé, the gods and goddesses are worshiped under the guise of Catholic saints. Here a young dancer I met in Havana has dressed up as Ochun, the goddess of rivers, and is dancing in the Caribbean Sea at the point where a river flows in. 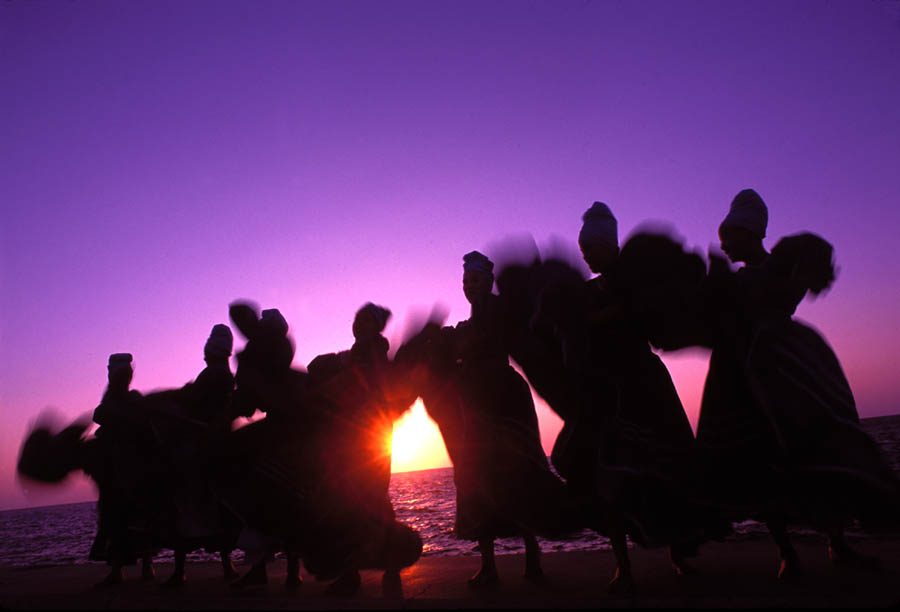 Yemanja, the goddess of the ocean, dancing on Malecón wall - Cuba

Here the dancer's friends have dressed up in the traditional costumes that represent Yemanja, the goddess of the ocean, and are dancing on the famous Malecón wall. I was also lucky enough to be taken to a tambor, or "spiritual house party," where drumming, singing, and dancing call down the spirits. It's not common for a non-initiate to be invited, and I had to promise not to take any pictures.