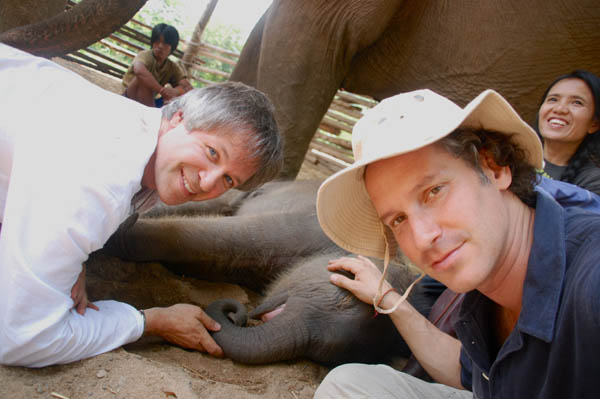 Azriel Cohen delves into the world of animal communication with The Elephant Whisperer in Northern Thailand.

A decade ago, if you would have talked to me about communicating with animals I would have said you were nuts.

When you communicate with an animal you will likely experience a “zone” that is unlike what you normally feel in communication with humans.

It is believed that all living beings have an innate capacity to communicate with one another (this includes plants). These theories claim that if we resolved our conflict with animals, we’d find that we can actually communicate with them.

I found the idea at first to be outrageous. Yet, with a curious spirit, an open mind and the willingness to experiment, I’ve had some fascinating and unexpected experiences.

When you communicate with an animal you will likely experience a “zone” that is unlike what you normally feel in communication with humans. The closest experience might be the non-verbal awareness of holding a baby or being with a lover.

It is an embodied physical experience. In this space we are tuned into our sensations. Our intuition guides us.

It is a long lost human capacity, that most, if not all, indigenous cultures once had. Derrick Jensen’s “A Language Beyond Words” and David Abrams’ “Spell of the Sensuous” are two great introductions to this topic. Trainings that can assist developing these capacities to engage with wild animals include the teachings of the animal tracker Tom Brown and Buddhist walking meditation. 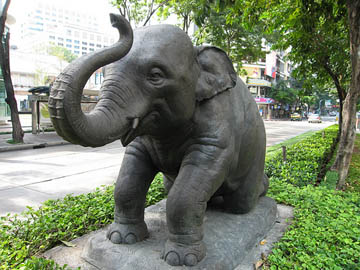 In Thailand, the relationship between humans and elephants is anything but exotic. An enduring symbol of Thailand, the elephant is at the very center of the culture and history of the region.

Historically, elephants were used in war and as beasts of burden to build the country. Spiritually, the elephant is significant because of a legend that Buddha’s mother dreamt of a white elephant before she conceived, and also because of Ganesha, the Hindu god with an elephant’s head.

Africa is the ultimate destination for a wilderness experience of the largest land animal, but for a human-animal experience, the place to go is northern Thailand where the slightly smaller Asian elephant resides.

It is unlikely that anyone visiting Thailand won’t see real elephants. Many tourists ride elephants on treks through the jungle and go to elephant shows, where the animals perform tricks that demonstrate incredible coordination and intelligence.

But the unavoidable elephant experience in Thailand is the surreal slow sight of a colossal grey-brown creature delicately stepping down the middle of a hectic tourist-filled street led by young men begging for money.

Elephants are renowned for their intelligence and sensitivity. Some people studying elephants wonder if the emotional intelligence of elephants is comparable to or even greater than that of humans. 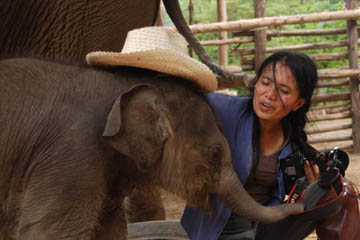 Whatever the truth is, there is no question that the human-elephant relationship is very special.

My most insightful encounters with human-elephant communication have been around the Elephant Nature Park, an elephant sanctuary and rescue center about one hour outside of Chiang Mai, northern Thailand.

I spent time with Sanduen ‘Lek’ Chailert, founder of the park who some refer to as The Elephant Whisperer, because of her special ability to communicate with elephants.

When she was five years old, her grandfather, the healer and shaman of her hill tribe village, received an elephant as a gift for saving a child’s life. He gave the elephant to Lek and mentored her as to how to engage with and heal wild animals.

Most Thais working with elephants believe that without breaking an elephant’s spirit, the elephant is incredibly dangerous. Lek believes that the elephants can be trained to have a safe relationship with humans, solely through the use of positive reinforcement and love.

One of the goals of the park is to gently influence the tourism market so that elephants that live naturally are more attractive to visit than elephant shows.

Most tourists have no idea that in order to train elephants to submit to the guidance of a mahout and to do tricks – the elephant must have its spirit broken.

Most tourists have no idea that in order to train elephants to submit to the guidance of a mahout (the elephant’s friend, caretaker and trainer) and to do tricks – such as painting and playing soccer – the elephant must have its spirit broken.

There is a long tradition in Thailand of a training ritual called phajan, where the elephant is confined in a cage for a number of days, poked and beaten, until it becomes scared of humans and loses its natural self-confidence.

Lek’s approach is revolutionizing the way people think about elephants and elephant tourism.

The elephants at the park, many of them physically and psychologically damaged from work injuries and abuse, are encouraged to lead as natural a life as possible. There are no elephant shows or elephant rides. Visitors can observe them, feed them, bathe them and walk with them.

During my visit, the park was at an historic moment – for the first time a baby elephant was born to one of Lek’s elephants. The new baby elephant, called Faa Mai (meaning “new sky”), Lek hopes, will offer her the opportunity to demonstrate to the world that her theory of disciplining elephants is realistic.

Lek invited my friend and I into the pen.

Under normal conditions it is extremely dangerous to be close to a mother and baby elephant. Tiny Lek, with absolute confidence and clarity conveyed to us that it was safe and explained to us where to go and what to do, so the mother would feel safe with us physically playing with her baby.

With an almost comically undersized trunk that it is still trying to figure out how to coordinate, a baby elephant is unbelievably cute…and bizarre.

From a human vantage point it has features that make it look much older than the adult elephants. Humans get more facial creases as we age, while baby elephants go in reverse like Benjamin Button, beginning with ancient creased faces that smooth out as they mature. 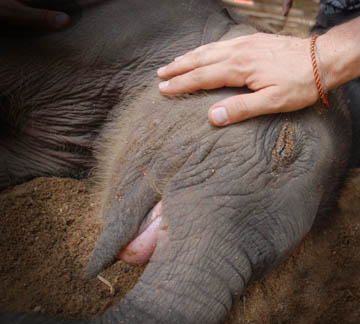 The 100 kg hairy baby “played,” trying to knock us over like a crazed rugby player.

When it tired, the elephant placed its head onto the lap of my friend, nearly crushing him in the process. But the baby was restless. I sensed that it was waiting for a specific kind of touch somewhere on its body.

When I “listened” to my own body I felt that I should lay my palm on the baby’s head, on its leathery cheek, just under and in front of its ear. The baby responded.

Within seconds its energy shifted from twitching around and flapping its ears to completely dropping into a deep sleep. From the tip of its undersized trunk, I could hear snoring. I had put a baby elephant to sleep!

For 10 minutes, I held my hand on the baby elephant while using some further techniques (which I’ll describe in a future article).

Later, walking with Lek among a small group of elephants in knee high grass, The Elephant Whisperer turned to me and said “People might say I am crazy to say this…but elephants can read thoughts.”

I wondered what it means that elephants can read thoughts. Perhaps, with enough effort, it is another lost human capacity waiting to be reclaimed.

Have you experienced this physical “knowing” with an animal? Share your experiences in the comments!