THIS PAST THANKSGIVING long weekend* I took a roadtrip to Radium Hot Springs with my partner. Not far out of town is a hike to a waterfall called the Lower Bugaboo Falls, the trailhead accessed from a logging road turning off from Brisco, BC (or from Spillimacheen if you’re coming from the north). It’s an easy but enjoyable hike through forest on a clearly marked trail, with some viewpoints overlooking Bugaboo Creek and down into the valley with mountains rising on either side.

About 30 minutes in the thundering of the falls grew louder as they came into view. I like to temper my expectations when visiting things like this; it served me well here. The falls were more “impressive” than I expected, more grand. I’m sure if this was in a national park (especially in the US) there would have been fences and tons of warning signs around about venturing too close to the cliffs, but as it’s not we were free to roam onto some pretty precarious ledges hanging over the waterfalls. A fall to either side would most likely have meant death. 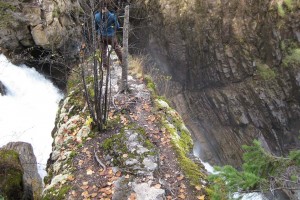 I have a slight fear of heights. Getting into rock climbing this summer has helped immensely to get over it somewhat, but without a harness and a belay I felt unsupported. Fear struck me. I watched as my partner cautiously but confidently strutted out onto the ledges. She wasn’t reckless, and I could tell she wasn’t scared. I followed behind, staying low, sometimes using four limbs to inch my way closer to the edge for a look over. I’d quickly retreat though to safer ground, but comfort never fully made its way into my body.

Before leaving the falls to head back to the car we wanted to honour them somehow. It was Thanksgiving after all. We stood out on one of the ledges facing the waterfall and sang a Sanskrit mantra:

After several repetitions, we stopped. There was a new calm that overcame me. We turned around to walk off the ledge and back onto the main trail. As I looked around — at the falls, at the creek, down the canyon, at the trees — I noticed that the fear had left me. It felt like the environment was supporting me, saying, “it’s OK, you’re safe.”

I realized how disconnected I was to my surroundings because of my fear; I wasn’t able to plug in and accept what it had to offer me. The fight had left me, and I relaxed.

*Canadian Thanksgiving was on October 10 this year

Tagged
Travel British Columbia, Canada
What did you think of this story?
Meh
Good
Awesome