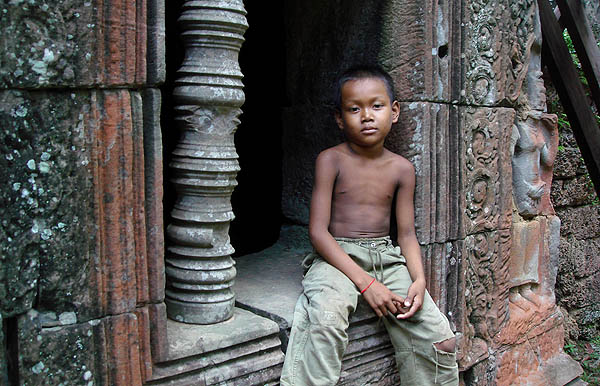 A Cambodian expat faces the daily reality of poverty and suffering – and wonders how it has affected her ability to cultivate sympathy.

This morning, I was making tea, and I read the name on the tea canister—the Thai company Phuc Long—and I didn’t even smirk, didn’t even think about making a joke about it.

And that’s one indication that perhaps I have been living here too long.

Yesterday, I was walking down the street, and the guy with no arms who sells books out of a box hanging around his neck asked me for some money. I wasn’t carrying my moto helmet under my arm (as I usually do, marking me as an expat rather than a tourist), and he didn’t recognize me at first.

And then he remembered me from around town, and gave a sort of shrug and a not unfriendly smile, as if to say, “Sorry! You’re a regular here. Of course you’re not going to give me anything.”

And then we both sort of chuckled and walked past each other, and it wasn’t until I was about half a block away that I got a sickening chill at my own indifference.

Has living in Cambodia made me less capable of sympathy? Even after close to a year here, it’s hard to know the “right” way to behave in the face of other people’s poverty and trauma. Feel it too much and you’ll be incapacitated; feel it too little and you’ll be some sort of Marie Antoinette (“Let them drink Angkor Beer if they have no potable drinking water!”) 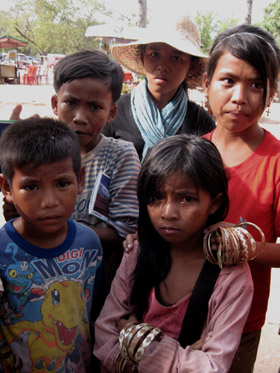 To feel as if you belong here at all, you have to become a little inured to the realities of landmine victims and grubby children, and to act otherwise is to be viewed as a sap by both Khmer and expats.

Once, I went into the local Mexican restaurant and two expat women were sitting with a little Khmer boy for whom they had purchased dinner.

They seemed a little sheepish though, because after they had ordered, they noticed that, unlike most of the kids hanging around Pub Street at night, this guy had new tennis shoes, went to a government school reserved for the solidly middle class, and had a mother who was keeping an eye on him while chatting with her friends across the street.

Of course, there are far worse things than buying a child, any child, a Coke and a quesadilla, but they felt as if they’d been duped, giving help to someone who might not need it the most. It was such a tourist thing to do.

And we roll our eyes at tourists, the people who swoop in for a week or two and throw money at the first problem they see, regardless of whether it will do any lasting good. Then again, at least they’re doing something.

What am I doing? Has anyone in Cambodia benefited from my writing so far?

And if I’m sometimes less sympathetic than I should be toward Khmer, you should hear my internal monologue about Westerners and their problems. Woe to the person whom I overhear complaining about heat, insects, potential bacteria in the water or uncomfortable bus seats; they will be silently excoriated by me.

Sometimes it is an asset to be able to witness the misfortunes of others and, instead of feeling crushing depression at the state of the world, feel sort of…well, lucky.

Firstly, haven’t they ever opened a guidebook about any Southeast Asian country?

And there’s another level to my reaction, the part of me that has always considered myself sort of a wimp. “If I can handle this,” this part of myself says disdainfully, “then you must be the lowliest of pansies.”

What’s worse, I actually like this tougher side of myself sometimes. It makes me feel hearty and resilient and less likely to feel sorry for myself. It’s not as if I’ve forgotten about the fact that, should I fall into penury tomorrow and die a slow death of starvation, that I still will have lived a more comfortable life than 99% of Cambodian citizens.

But sometimes it is an asset to be able to witness the misfortunes of others and, instead of feeling crushing depression at the state of the world, feel sort of…well, lucky. And yet…

I was talking to my monk friend Savuth about how, in the Buddhist view of things, human love is a kind of suffering, just like hate is. It is hard, having been raised amidst Western ideas, to wrap my head around this. 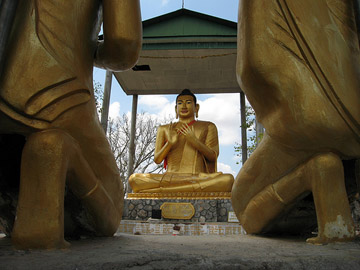 To a Westerner, the Buddhist ideal of “detachment” sounds suspiciously like indifference. But I think what Savuth was speaking about was achieving a philosophical equanimity—you should feel sympathy and pity for wealthy crooks and beggar children alike, because they are both suffering as part of the human condition.

My friend Elizabeth long ago told me something similar in a different way—”Just because root canals exist, doesn’t mean that getting a papercut isn’t painful.”

But isn’t that just like me, to look at a problem cerebrally instead of dealing with the sticky business of how to feel?

The last time I was in New York, I found myself telling a friend about the Big-Headed Baby, the monstrously deformed infant whose mother takes him to all large festivals, where she begs for money, a container for change placed on the corner of his dirty blanket.

Who wouldn’t feel sympathy for the child? But I have a hard time feeling pity for the mother, when she must be aware of the glut of nonprofit organizations in Cambodia who could possibly help her child—it is simply more immediately profitable to parade him around like a circus act.

Even so, my friend looked a little taken aback by my callousness. And maybe he should have been. I cannot conflate my own attitude with Savuth’s universal sympathy—nothing proves this more than my very disparate feelings toward the Big-Headed Baby and his mother.

So where does this leave me? Vainly hoping that I can force myself to feel for both the root canal patient and the papercut victim? Cambodia never provides any easy answers; it only makes it harder to ignore the questions.

Perhaps that means that I have not lived here long enough.