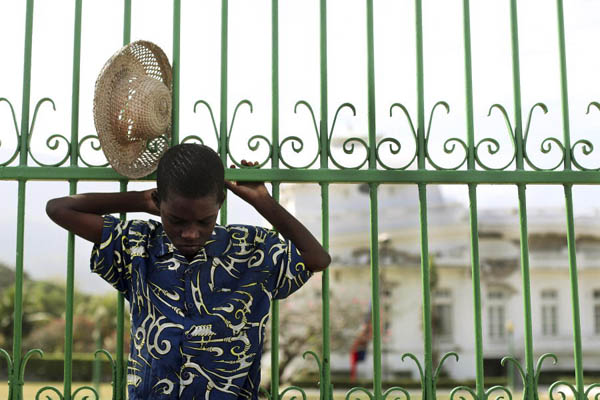 In the face of mass destruction, how does faith react? The 2004 tsunami offers surprisingly answers, mirrored in the recent Haiti earthquake.

While most Americans strongly sympathized with the victims of the Haitian earthquake, and were quick to fundraise for humanitarian aid, a Christian evangelist by the name of Pat Robertson offered a different response. He inferred in the media that it was God’s retribution for a pact the Haitians made with the Devil in the nineteenth century.

Although this view might seem incredulous to most rational people, the use of natural disasters to convert or radicalize victims is not a new phenomenon.

‘Fire and brimstone’ was preached by Puritans in Britain before they carried it across the Atlantic to the New World.

In 2003, Islamic fundamentalist Abu Hamsa Al-Masri asserted that the Space Shuttle Columbia explosion was an act of God against the trinity of evil (Christians, Jews and Hindus) opposed to Islam. And purporting to speak for Judaism, the Rabbinical Alliance of America recently blamed natural disasters on the use of gays in the military.

Ironically, CNN reported that after the devastating earthquake Haiti, Christian belief strengthened or spread among the survivors. 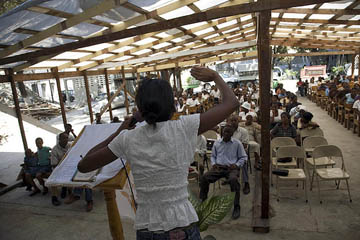 The strengthening of faith in the face of awful loss was no surprise to anyone who viewed the recent documentary Tsunami: Where Was God? Former Dominican friar Mark Dowd investigated how belief in a benevolent God can be reconciled with natural disaster as he visited areas hit by the Indian Ocean tsunami in 2004.

While Dowd expected that religious faith would have diminished in the areas, instead he found that even people who had lost all their family and belongings in the tsunami had more faith after the disaster. Here’s how each religion responded:

The Muslim Response in Banda Aceh

Banda Aceh bore the brunt of the 2004 tsunami in Indonesia. Fadil, who had lost his whole family to the tsunami, told Dowd that his faith was stronger now. Yusuf Al-Qardhawy, of the Islamic Defence Front, said it had been a warning from God, as there had been too much carefree living, (such as the wearing of loose clothing). Prof. Yusny Saby, an expert on Islamic Philosophy, said you cannot know God’s reasoning: it is a test, and if you pass you get closer to God.

Dowd did not think there was much difference between Saby and Al-Qardhawy: they both believe people have to earn their virtues rather than being born with them. Life is a test.

The Hindu Response in Tamil Nadu

15,000 people died off the coast of Tamil Nadu. Dowd interviewed Prof. G Bhaskaran, who told him that destruction was one of five qualities held by the Shiva deity, while its son, Ganesha, builds life. This meant that Hindus were spiritually prepared for the devastating tsunami. Ramayee, a local woman, believed the child she lost to the wave would be reborn, since all children are one anyway. She saw her son in other children she sees and believes God shows them to her for a reason.

On the question of karma, Sri Sri Ravi Shankar, a member of the Art of Living Foundation, said there was positive and negative karma in everyone. Karma is not the same as fate, and you have freewill to turn your life around. He said that humanity cannot understand everything as we have limited intellect. When Dowd said he didn’t like the idea of children dying so others can show compassion, Shankar correlated the Islamic viewpoint when he said that “there can be no compassion without suffering.”

The Buddhist Response on the Thai Coast

Dowd travelled to Thailand next. 5000 people died when the tsunami crashed into the west coast. Dowd explained that Buddhism is derived from Hinduism, so karma was once again invoked. A Buddhist nun called Dhammananda explained that karma does not mean that a person who dies is reborn as that same person.

Rather, it is like a candle being lit by a flame from another candle: the original flame does not pass to the new candle; a new flame is lit. She also thought that fixed identity or the self is just a social construct or illusion; we are all part of an aggregate energy, and only those who discipline mind and spirit escape the cycle. When Dowd asked her “is there a God?”, she said it is not her main concern; she makes the best of her life whatever its reason.

The Christian Contribution from Kansas to the Vatican

While on the Thai coast, Dowd also arranged for Bjorn Muller, a Swede who lost family members to the tsunami in Thailand, to phone the Kansas Baptist Church, as they had blamed the disaster on ‘gay Swedes’. They defended and reiterated their position, citing a biblical passage, but when challenged to identify it they angrily hung up the phone.

Dowd travelled to the Vatican Observatory next for a more rational Christian perspective. Father Chris Corbally, Vice Director of the Vatican Observatory, asserted that God was still the best explanation for the universe, and that “creation reflects the creator.” When asked why the planet was not created perfectly, Prof. Nancey Murphy attested that if the Earth was smooth all over it would be marshland and only good for basic life.

Dowd spoke to Richard Dawkins for an atheist perspective. While Dawkins acknowledged there may be a creator, who set up the physics needed for evolution, he said that it’s ridiculous to claim that it intervenes to cause individual disasters such as the tsunami. 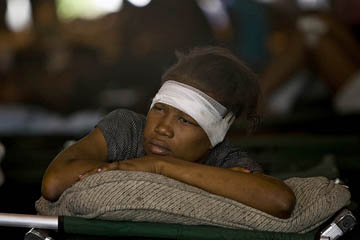 Dowd concluded the film by outlining the strand of opinion running through all the religions he’d investigated: that there was a need for suffering and tests so that people could show compassion and grow closer to God. This is similar pattern repeated after the Haiti earthquake.

If God is thought to have created our world then believers don’t seem to feel as if they can blame it for their losses. Rather, that same God offers hope for those who died and the survivors. As the alternative is a belief in nothing, and total loss, it is not a surprising position. This is similar to the ancient worship of pagan deities, where anything from bad harvests to natural disasters were blamed on angry gods.

If the Haiti earthquake had hit the USA, Pat Robertson would likely have adapted his blame to those Americans with irreligious behaviour he does not agree with. Abu Hamsa Al-Masri would also have seen it as the intervention of his God, and probably blamed it on American foreign policy.

The truth is that disasters can be harnessed for hope or blame. The interpretation depends largely on the individual, and if they’re free to make their own decision, or told by various religious leaders how they should feel about ‘God’s judgment’.

What do you think about disasters and faith? Share your thoughts in the comments!