View all travel news
Top Destinations
Top CitiesView All Destinations
Trending Regions
Trending Cities
Load More
Sometimes, it’s about going to the furthest lengths possible to represent all religions that are a part of two families. 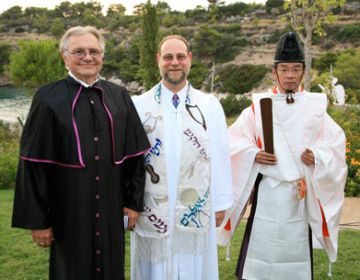 Yep, that’s an East Coast Rabbi, Catholic priest from California, and a European Shinto priest who gathered in Greece to unite a Sephardic Jew groom and a bride with both Shinto and Catholic roots. Pretty darn unique.

Both wanted to please their traditional parents, but also the traditions alive within themselves.

Made me think about all of you out there that have connected with and honored people of different races, creeds, and socioeconomic statuses, and yet remained proud of your own. And just how beautiful that is.

Whether we are debating the nature of love between a white man and Asian woman, or the spiritual implications of a polyamorous relationship, it seems we still can agree that sometimes, love just conquers all.

And maybe it is simply love that we need to bridge different religions. As the groom noted, “Religion should unite people, not separate them. And after all, aren’t all religions one?”

Do you have a story of a religiously-complicated relationship that broke through the barriers, either your own or someone else’s? Share your thoughts below.