YOU CAN’T PHOTOGRAPH THE DARKNESS. But you can’t take pictures without it either. Today is a day of noise and violence. I’m trying to take photos but I’m surrounded by demons and fire. Entire villages are marching past me carrying enormous Ogoh Ogoh demons towards their grave. It is the eve of Nyepi, the Balinese New Year.

The children of every village have spent weeks constructing these paper monsters. Each one represents a vice: lust, alcohol, avarice, or greed. They are comical and frightening, familiar and hideous. Big tits. Greedy eyes. Flaming genitals. They march them through the streets lighting fireworks and banging drums, a chaotic cacophony clashing through the night.

The Balinese wrap their Hindu temples in black and white. They believe in light and dark. Good and evil. The balance of all things. Their sense of ceremony is a near constant presence, but certain times — like tonight — it reaches a raucous overkill. I grab my camera and wade into the midst. The Balinese smile and wave. Their religion is so open and accepting. Shoot away, they say. Shoot the gods.

Their welcoming spirit has brought a lot of attention to Bali (some good, some bad). The locals know the life here is not the postcard fantasy depicted in brochures. There is equal parts light and dark — that is life. So tonight they celebrate the end of one year and the start of another. They parade their demons as a spectacle for photos and prizes. A source of pride. And something to be forcefully evicted. 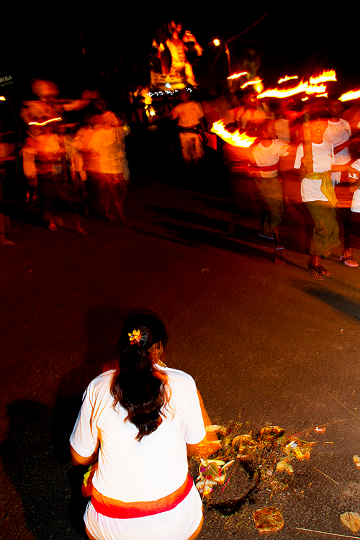 When the Ogoh Ogoh’s reach their final destination — a beach, a graveyard, an auspicious street corner — they light them on fire. Demons in flames. Such gorgeous torment. Such a fitting metaphor. But tonight, a few of the biggest and finest statues don’t get torched. The Alcoholism. The Lust. The Greed. They parade them around, then take them home and store them in the garage somewhere. Seems like a bad idea if you ask me…even metaphorically.

The ashes settle and the streets clear. An ominous stillness settles over the island. No more drums or firecrackers. No more taxis or traffic. No more clubs. No more cars. No more nothing. This is Nyepi: the Day of Silence. No one is allowed outside for the next 24 hours. No one can use electricity. You’re not even supposed to talk. After a year of chatter motorbike barking dog rooster crow construction site hammer drum clatter boom bang…the silence is deafening.

The demons — the ones we torched, at least — are in the sky above now. If you make too much noise. If you turn on a light. If you do anything that might attract their attention, they’ll swoop back down and occupy your home for another year.

So everyone stays inside. Everyone. The streets are perfectly empty and you wouldn’t want to get caught walking them either. The Balinese take this ritual very seriously. Many of the island’s expats choose to leave the island for this ceremony. They rent hotel rooms or plan off-island vacations. Free wifi and a breakfast buffet. Even if you attract a demon, it will only occupy some random hotel room.

Personally, I wouldn’t miss it. From the fires of the Ogoh Ogoh to the shocking silence of Nyepi, the Balinese New Year has become my favorite holiday. It’s a great reminder to slow down, shut up, and just be still for a moment. You can’t hear the silence unless you stop to listen.

Here in the air-raid quiet of spirits passing overhead, I crack a beer, put my headphones on, and upload some Ogoh Ogoh photos to the Internet. Hopefully, I can sell one or two of them. Let the world know all about these quirky Balinese forgetting to burn their demons.

[Bali’s annual “Day of Silence” prevents the release of an estimated 20,000 tons of CO2 – environmental groups are currently lobbying for a March 21st “World Silent Day” in recognition of global warming issues. Find out more at: http://www.worldsilentday.org/] 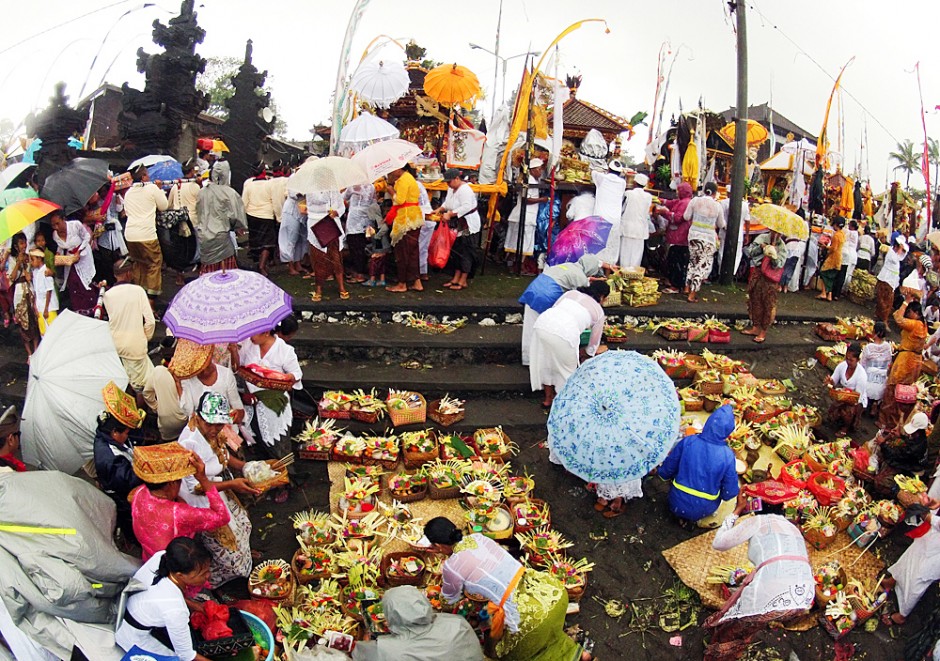 Day before Ogoh Ogoh march, all villages march their local shrine to the ocean for a blessing. Offerings are made. 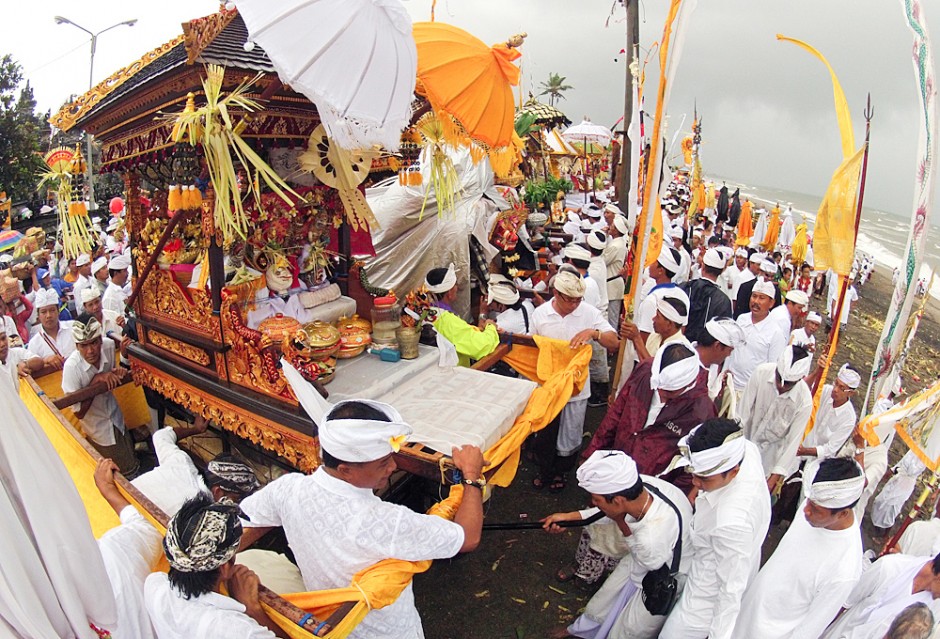 Village locals stand with their family shrine after a beach blessing. Shrines are carried from home to ocean, wherever they may live. Entire day is one of enormous processions. (Translation: don't drive anywhere.) 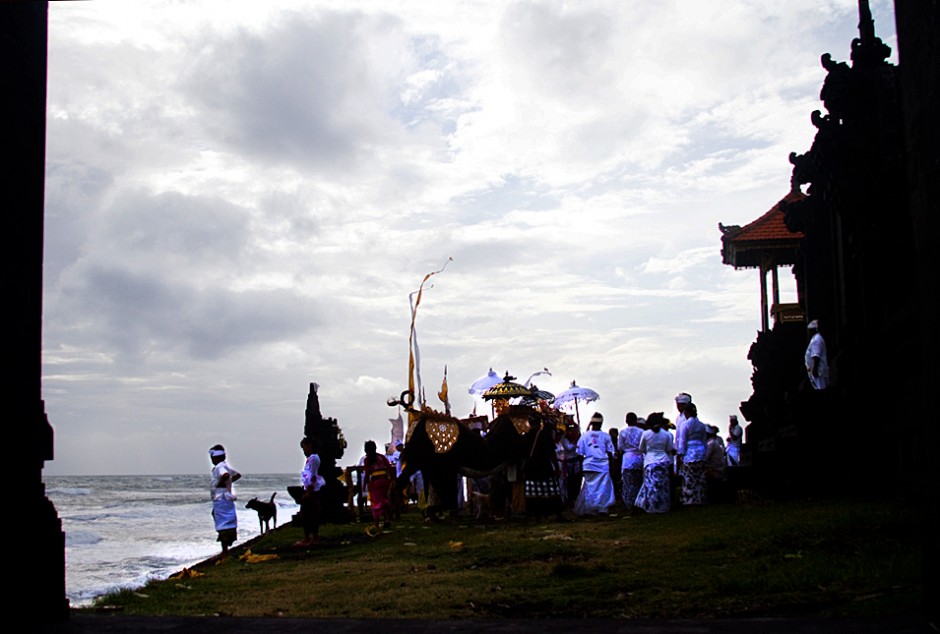 Balinese prepare to enter the temple. Ceremonies like this are as much social gatherings, places to gossip and catch up. Communities and families remain very close-knit here. 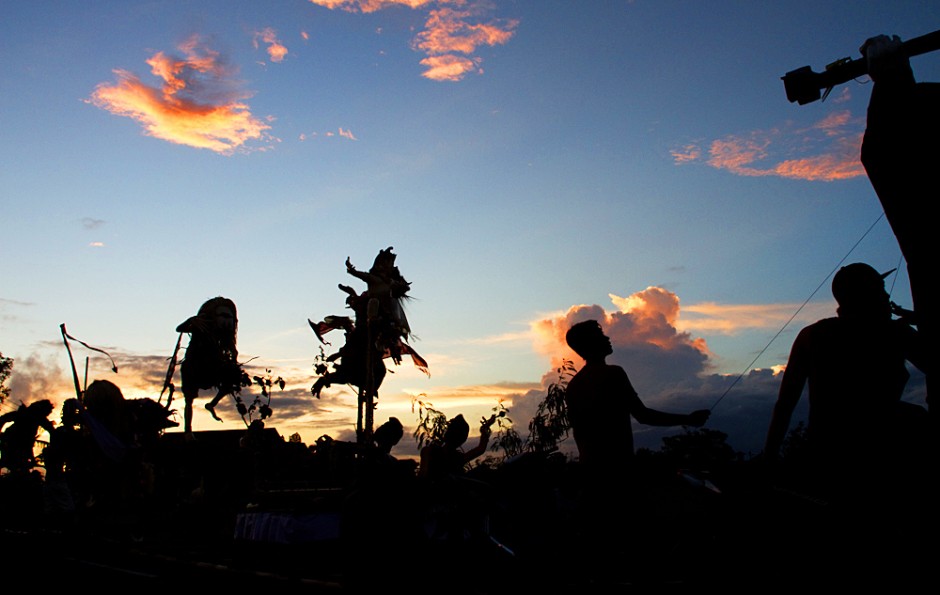 Ogoh Ogoh's line the street for a final sunset viewing before their dramatic march. The word "ogoh" means demon -- when you say a word twice, it has a stronger connotation. 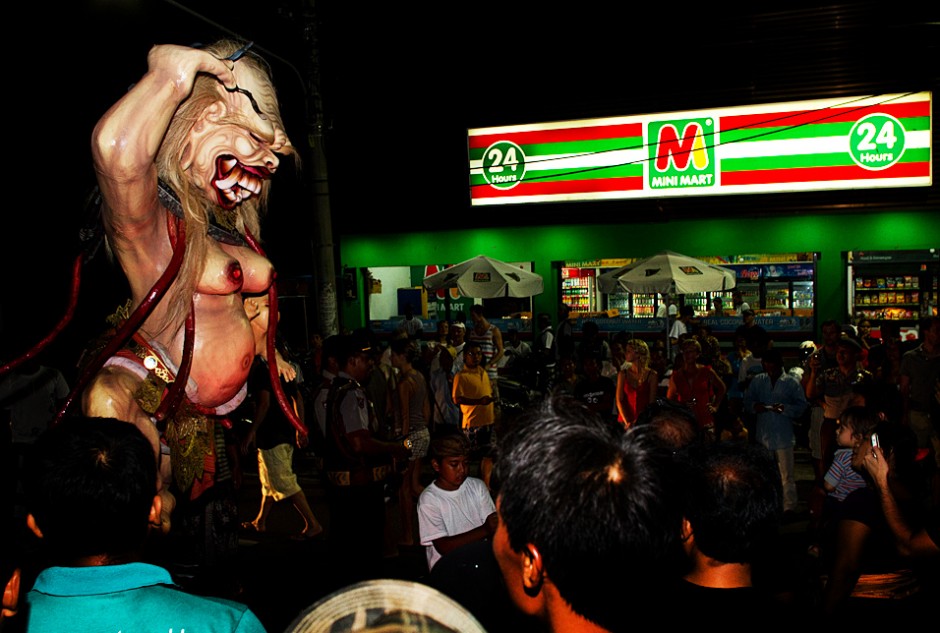 Moments before the march, a thirsty demon fuels up at the local mini-mart. 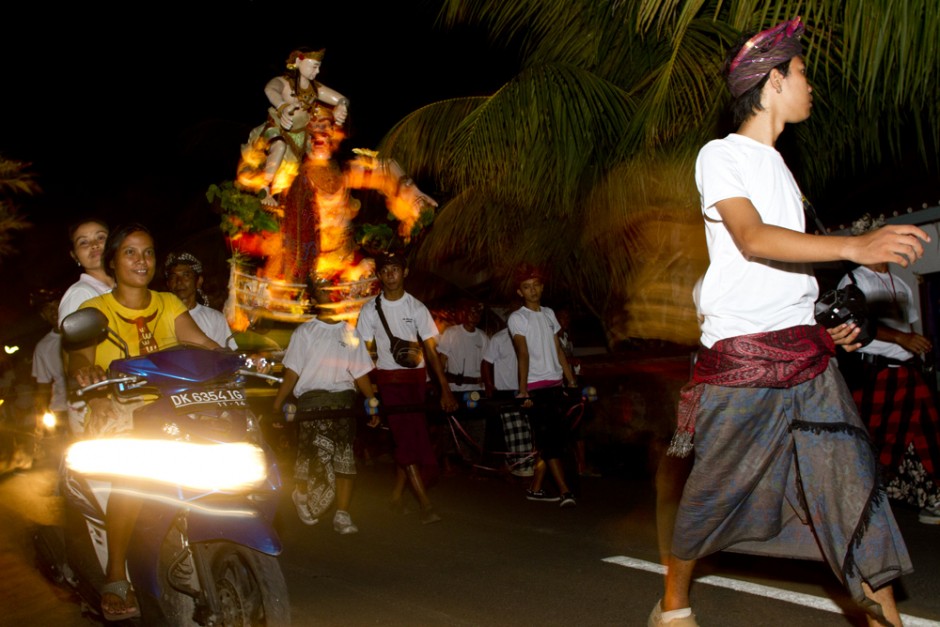 Locals march the Ogoh Ogoh's to the ocean. 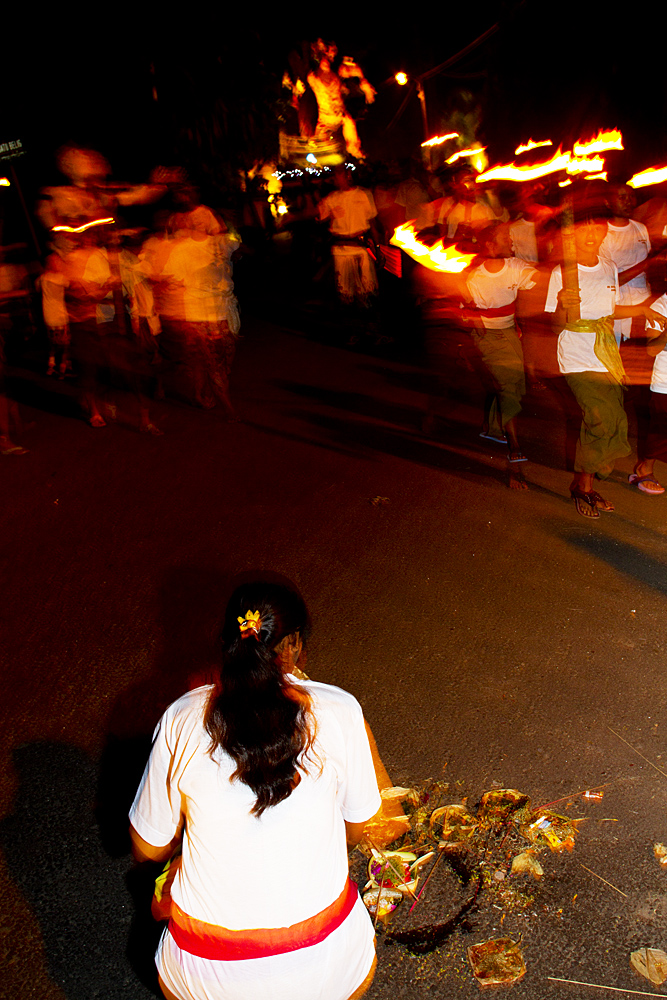 As the procession passes her house, a woman leaves an offering to the gods. Balinese Hindus typically make several offerings a day -- more on special holidays like this. 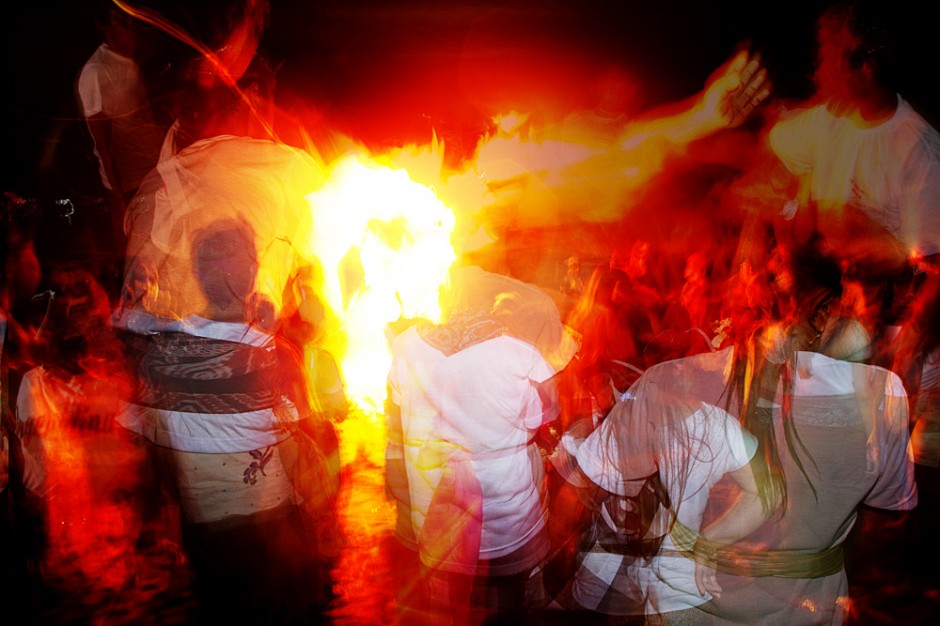 After months of preparation, the final moments are fast and furious. The demons burst into flames and take to the sky. Silence follows.

18 Signs You Were Born and Raised in Bali