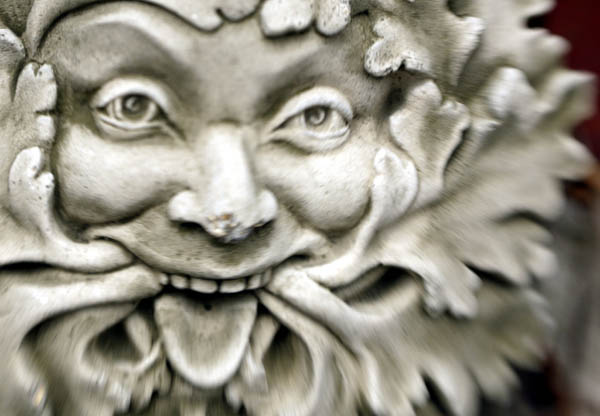 The icon of several religions, the Green Man’s history spans from medieval churches to hippies in the 60s.

As a born-again pagan hoping to keep the UK green, the Green Man seemed a perfect place to start.

The forest symbol was, of course, a part of British heritage and a defender of green spaces. When I started my research into the motif, some of the literature supported my original image of the Green Man; these books generally focused on his spirit.

The “Green Man” forest spirit has traveled the world for centuries, and seems to have adapted to local cultures as the centuries have passed.

However, another line of research concentrating on archaeology and history declared the Green Man a well-traveled universal religious icon, brought to the UK by Christianity. I was intrigued by the split personality of the Green Man, and will describe what we know about an archetypal symbol that continues to influence and inspire cultures around the world.

The “Green Man” forest spirit has traveled the world for centuries, and seems to have adapted to local cultures as the centuries have passed. Some of the best evidence of the phenomenon today is interestingly found on medieval churches in France and England. But in ancient times, this pagan God of nature lived not only among Celtic forest tribes in northern Europe, but also among great architectural empires such as Egypt, Greece and Rome.

So how did the Green Man find itself becoming a common church decoration, and what do we now know about its origins? The trail appears to stretch from Eastern Asia across to North America.

One theory about the origins of the Green Man in the West is that it is a pagan artifact derived from the ancient Celts’ worship of the head. The Celts regarded the head as the seat of the soul. 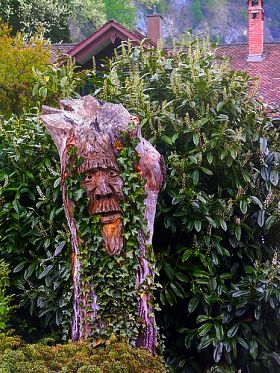 An armlet found in a Celtic grave at Rodenbach in Germany, dating from around 400 BC, provides material evidence to support a link between the Celts and later representations of the Green Man, as it has a decoration that culminates in an abstracted male head wearing a crown of yew-berries.

As Christianity later spread across old Celtic territory, pagans who converted to the new religion may have influenced the adoption of the nature symbol by the church.

The first record of such a figure in a Christian setting is on the fourth century tomb of Abre in the Church of Saint-Hilaire-le-Grand in Poitiers, France. Abre was the daughter of Saint Hilaire, who was a high-ranking pagan that converted to Christianity and became a renowned figure in the church.

Christianity may also have become accustomed to the foliate heads through the recycling of pagan ornaments, as many old temples and statues were adopted by churches. For example, in the sixth century, as the Franks took power in North-Eastern Europe, Archbishop Nicetius of Trier maintained several foliate head figures in the cathedral church he rebuilt, despite their origination as a pagan symbol.

A few centuries later, the foliate heads became a common feature on continental medieval churches. They then crossed the channel into Britain with the Normans, but remained largely unnoticed until being named Green Men by Lady Raglan in 1939.

After their naming, a common theory for the origins of the foliate heads was that they had been passed down from ancient British pagan tradition, along with the Jack-in-the-Green May Day figure.

However, an exhaustive historical study by Dr. Roy Judge found no evidence of the Jack-in-the-Green before the eighteenth century, centuries after the Green Man foliate heads crossed the channel into British churches.

Although the Green Man may be a descendant of old Celtic and European culture, there is another line of thinking that traces its origins to south and east Asia. 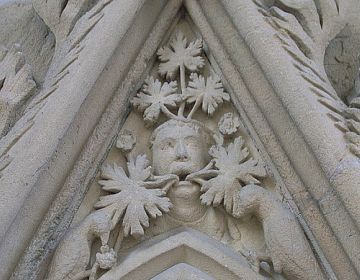 Renowned Green Man researchers such as Mercia MacDermott and Mike Harding argue that the most common representation of the European Green Man, which disgorges vegetation from its mouth, bears a striking similarity to statues of the kirttimukha and makara in India.

Harding also found a similar design in the Apo Kayan region of Borneo, and thinks the motif traveled along the trade routes linking Europe and Asia.

Another motif that links the East and Europe at that time is the Three Rabbits/Hares figure which often appears in churches alongside the Green Man. Harding explains:

“This second motif consists of three rabbits, or hares, chasing each other in a circle, with each animal sharing an ear in much the same way as six foliate heads on the roof boss in Chichester Cathedral each share an eye with their neighbours. The earliest known example of this triple rabbit motif occurs in Buddhist cave paintings, dating from the late 6th/early 7th century, in Dunhuang, on the edge of the Gobi desert in western China.”

As with the Green Man, there is no written record of what the Rabbits/Hares motif symbolizes. Chris Chapman offered the following theory:

The hare is strongly represented in world mythology and from ancient times has had divine associations…in Christian contexts, the three hares may be associated with the Virgin Mary in her role in the redemption of mankind. This might explain why a Three Hares boss is often juxtaposed in western European churches with a boss of the Green Man, perhaps a representation of sinful humanity.

New Homes for the Green Man

Although ecclesiastical Green Man figures peaked in medieval times, they found a new home on secular buildings around the world during the Victorian era.

The Green Man’s resurgence gathered pace in the twentieth century, starting with its naming by Lady Raglan, and then becoming an environmental totem for the counter-culture movement that emerged during the 1960s.

The Green Man now looks very healthy for a 2500 year old global traveler, but whether this is one Green Man archetype that has traveled the world, or many similar designs that have emerged like pyramids in the Jungian collective unconscious, is still unclear.

We may never know the truth.

What do you think about the history of the Green Man and his cultural influence? Share your thoughts below.