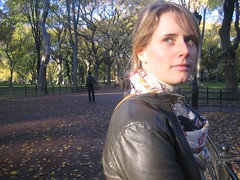 EVER SINCE I BEGAN traveling solo at age 19, I’ve been told the same thing over and over: traveling alone as a woman is dangerous.

Many people speak as if I’m inviting violence upon myself, as if it would be my fault if something happened, as if we live in a world that is populated only by creeps and muggers.

I always explain that danger is a fact of everyday life wherever we live, and that an autonomous woman is safer than one who depends on others for protection, because she is self-assured.

Traveling has given me a take-charge attitude that makes anyone with bad intentions less likely to mess with me. Furthermore, it has enriched me, taught me how to support myself in difficult situations and cope with things on my own.

Traveling solo I suppose, is one of the ultimate challenges for a woman, and that is part of the reason why I enjoy it so much.

A Dose Of Inspiration

Growing up, some of my greatest role models were fictional traveling men. I became a traveler in spirit during the days of The Littlest Hobo, a movie and TV show about a traveling dog. When my grade six teacher read us Jules Verne’s Around the World in Eighty Days, I was surprised to learn that there were not just traveling canines, but traveling people as well.

While I did not experience any latent colonial longings, I wanted to ride an elephant, not just My Little Pony. I loved Indiana Jones movies, and as a teenager, Jack Kerouac and the Beat Generation inspired a yearning within me that could not be stifled by one read through On the Road.

Then Easyrider arrived, with all its hippie kitsch – that movie was my inspiration to go to New Orleans, although sadly I didn’t travel by motorcycle.

It was a while before I learned about women who traveled, because in my conservative town in Canada, I didn’t know any.

People in my neighborhood took trips because they had money and could afford a cruise, not because they were hungry for a big adventure. Recently, I read about Dar Robertson, in 2006’s The Best Travel Writing: True Stories From Around the World, and she has since become my hero.

Women are so used to being told what to do, and being led around, that they sometimes forget it’s their own voice that counts.

In her story, “Sahara Unveiled”, she recounts her trip to Morocco and Algeria in which, dressed as a man, on her fifth week of solo backpacking across Africa, she drives illegally across the border into Algeria, gets caught in a sandstorm, and is later saved by strangers, a group of gentle Tuareg men.

She recounts her story with the voice of a woman in touch with her instincts, moved by the thrill of discovery and the kindness of her fellow human beings. She writes, “I was here…I was not afraid…I was ready for the next challenge”.

While some people might think what Robertson did was foolish (and it’s true she took risks), she is a role model for traveling women everywhere, simply because she had faith in her own instincts and capabilities.

Instinct is our center. It functions as a personal alarm system that tells us when we are safe, and when we are in danger. Women are so used to being told what to do, and being led around, that they sometimes forget it’s their own voice that counts. Women with a taste for adventure do themselves well to get in touch with that inner instinct.

While our fears of being hurt, raped or even killed are real, we are never safe all the time, anywhere in the world. A woman who stays in her house with all the lights on might cut her risk of violence on the street, but as well, she will block herself off from the great fountain of experiences that awaits her.

How can women stay safe when traveling abroad?

Just remember that it’s a lot more fun to take a small risk than it is to stay at home.

Firstly, I believe we should do what our parents and the Lonely Planet both advise. We all know that it’s a bad idea to walk alone at night, to flash our jewelry and large sums of money, to show off our underwear in conservative countries (or even North America, with the exception of New Orleans), or reach for more than a couple of bottles of beer, especially when we’re hanging out with “strange boys”, as my mother likes to call them.

While doing any of these things would never justify a mugging, rape or worse, a murder, it’s plain to see that using common sense is no different from wearing sunscreen – if you don’t want to get burned, take basic precautions. Just remember that it’s a lot more fun to take a small risk than it is to stay at home.

Secondly, and perhaps most importantly, we should simply do what we want.

With our heads up and our eyes wide open, grounding ourselves in our natural ability to make decisions and lead ourselves, we will become wiser, stronger, and better able to protect ourselves as we navigate the globe.

The potential for violence that surrounds us will begin to disappear when we nurture our own independence in the same way we care for our families and loved ones. By staying true to ourselves, we will find adventure on the road and get home safe and sound.

While women who choose not to travel deserve their own applause, so do the courageous women who reach out for the grand and sometimes uncertain joys of travel. The world is our oyster, and we deserve support and encouragement for taking the bold steps we do.

What are your most memorable experiences as a female solo traveler? Share your thoughts below!

Emily Hansen is a travel writer and teacher based in Shimla, India, where she is working on a book about her experiences as an expat. Her native land is Canada, and she has traveled to over 30 countries, and has lived in six, including Germany, China, Korea, Thailand, Taiwan, and now, India.
Tagged
Culture
What did you think of this story?
Meh
Good
Awesome