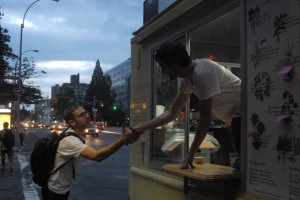 "Cool ice-cream truck": Being kind is not just good for other people. Neuroeconomist Paul Zak has shown that acts of altruism can flood your system with a happy hormone known as oxytocin.

“LIVING IN A METROPOLIS produces an intense awareness of time,” writes Brooklyn artist/poet, and Spontaneous Society creator Jon Cotner. “Situations and people vanish before they even appear. Everything can seem so fleeting.”

“If we’re going to reach out to someone, and create a smile or conversation that otherwise wouldn’t exist, this must happen now. Otherwise it’s too late.”

Spontaneous Society is a series of guided walks through New York neighborhoods that give participants practical tools — a catalog of one-line utterances — for connecting with their worlds.

Cotner has tested each line thousands of times over thousands of blocks across multiple cities. Samples include:

“That’s a good-looking dog.” (said to someone approaching with a dog)

“That’s a good-looking duo.” (said to someone approaching with two dogs)

“That’s a good-looking wolfpack.” (said to someone approaching with three or more dogs—surprisingly common in New York)

“That looks pretty cozy.” (said to someone pushing a baby carriage)

“It must be nice to have a little helper.” (said to someone with a kid pushing a carriage or helping in another way)

“That’s a good pace.” (said to someone jogging past)

“It’s a good day for a ride.” (said to someone biking past)

“It’s a good day for a skate.” (said to someone skating past)

“That’s a good parking-spot.” (said to someone exiting a car)

“It’s a nice day for a picnic.” (said to someone eating on a bench, blanket, or doorstep)

“It’s a nice day to have the feet out.” (said to someone resting their bare feet)

“I hope the pizza pie stays warm.” (said to someone holding a pizza box)

“They say carrying bags is good exercise.” (said to someone holding heavy bags)

“That looks like a handy cart.” (said to someone pushing a handcart)

“That’s a good spot for a text.” (said to someone typing a message)

“Safe travels.” (said to someone wheeling a suitcase)

Adults, kids, even non-human animals respond to his lines. Once Jon told a man with a white parakeet on his finger: “That’s a good-looking bird.” The bird smiled then smoothed its feathers. It said “Good evening.”