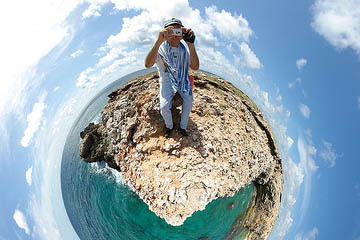 Thanks to technology, our presence is unparalleled: we can hear whispers around the world, and be anywhere on the globe in less than a day.

Transportation and communication have developed at an incredible pace in the past 100 years, and have had staggering impact on who we are.

Now that the doors to the global village flung wide open, how do we meet this reality?

A perpetual traveler is:

“…a person who designs their life so that they’re not the legal resident of any of the countries in which they actually spend most of their time…. Whatever the reason (for becoming a perpetual traveler), it means disowning your allegiance to your home country without giving it up to another. It means becoming a citizen of your own empire.”

While a world citizen is:

“…someone who decides to stop seeing the world as something segmented by nation, and look at it as the home of humanity where we’re all entitled to enjoy, and mandated to be responsible for, the territory of each nation. The world citizen doesn’t see any sense in national citizenship and decides to stop seeing things through the lens of patriotism or from the perspective of the country they grew up in.”

Which Do You Consider Yourself?

Both roles reject borders, but the difference between them is subtle.

A perpetual traveler discards the sense of home – often to avoid paying taxes, or for a more profound sense of privacy or non-affiliation. The world citizen sees the entire planet as home, and one’s citizenship as only a historic formality.

As Falconer says, “The concept of the perpetual traveler is about reducing your dependency and responsibilities and the world citizen is about increasing (them).”

If the question really is about dependency and responsibility, let’s look at each facet separately:

Perpetual travelers minimize their influence confining it to their immediate location. Because of this, a perpetual traveler is always based in the present experience – the past is irrelevant and the future is unscripted.

Perpetual traveler focuses on their undiluted contact with life, and is less concerned with being the fixture of a culture.

World citizens broaden their scope to an unlimited degree – a degree that will most likely never be realized. Being so conscious about cause and effect places them within a wider consideration of time. They draw from the rich palette of borderless relation, basing their experience by the potential to connect through social schemes.

Because the judgment is shaded by personal bias, it’s shortsighted to judge one way as entirely right or wrong. Together, they reveal a variety of meaning that’s invisible under normal conditions.

To see the consequences of these roles – or disregard them entirely – is an attitude that may suggest which emphasis you lean toward.

Do you see yourself as a world citizen or a perpetual traveler? What importance does one role have versus the other? Let us know what you think.