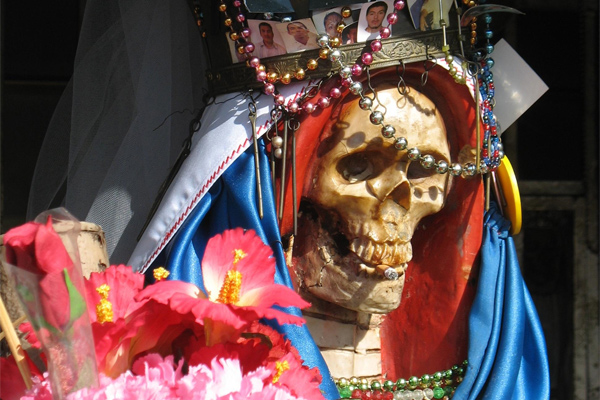 New and unusual saints emerge in a troubled Mexico.

In this month’s National Geographic, Alma Guillermoprieto wrote an interesting feature story about the growing trend in Mexico (fueled primarily by the drug violence and economic difficulty) of swapping the more traditional Catholic saints with a series of more unusual and macabre spiritual figures (for example, a cheerful little fellow called “Saint Death“).

Now some of you might be thinking, “Hey, doesn’t praying to Death seem a little at odds with… you know… Christianity?” I mean, wouldn’t Jesus get a little pissed?

Then again, some people call Catholicism a polytheistic faith anyway (with the Holy Trinity and hundreds of saints). So maybe Jesus won’t mind saying a little prayer to the Grim Reaper.

I’m kidding, of course. However, the article does raise an interesting question for me: How does a highly religious population react when facing immense and violent hardship?

The Effects of Hardship

Do religious people, when faced with a crisis of faith, look for just about anything else to replace their cracked belief system?

I guess I can see the appeal. You have a highly religious population. Many feel they’ve been let down by the primary figures of their religion (for not answering prayers), but they don’t want to throw the old belief system out completely (because as an individual you might feel you still need something to hold on to, or maybe you fear being ostracized… who knows.)

So many seem to swap out the old theology for something novel, something a little mysterious, but something that still seems to fall within the blurry lines of the old belief system (especially if there are enough other people who buy into it to make you feel like part of a flock).

While I’m using what’s happening in Mexico as an example, an en masse change in beliefs seems to be a common occurrence throughout history when uncontrollable “bad stuff” happens.

Between the Black Plague and the Holocaust, huge changes have taken place in religious make-ups. Some stopped believing, some started believing more fervently, and others abandoned their old systems altogether for something new.

How do you feel hardship affects religious belief on a large scale? Share your thoughts.