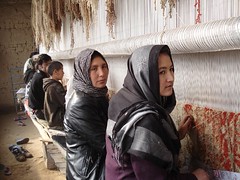 I want to urge caution in what has become a widespread and unqualified enthusiasm for the whole micro-finance thing. Since Yunus won the Nobel Prize, people have been afraid to criticize the idea of micro-finance.

But I hold a great degree of skepticism about the effectiveness of micro-loans to promote authentic well-being and prosperity for folks in the so-called “developing world” over the long term. I hasten to add that I am not dismissing the concept 100%, out-of-hand. But I have serious doubts.

I fear that the principal effect of micro-lending is to further hook people into dependence upon the money economy. In the so-called “developed” world, we can scarcely imagine a thing such as independence – we are totally reliant on money to buy everything we need and want for our lives.

But the rural “poor” of the world – the subsistence farmers, for example – can and do maintain a significant degree of independence from the money economy.

They do this by producing much of what they use themselves or within their immediate communities. This kind of locally self-reliant economy is preferable – it is far more stable, more ecologically sound, and more preservative of community than the global economy.

My fear is that micro-lending provides yet another mechanism (under the failed rubric of “development”) for inducing folks off the land and out of their local communities, estranging them from their traditional cultures and thrusting them into the cities, which is to say the slums.

The best strategy to “help the poor” is to reduce their requirements for money, not find ways to make them more dependent upon it

The best strategy to “help the poor” is to reduce their requirements for money, not find ways to make them more dependent upon it, even if those ways involve giving them a little money and even perhaps appear helpful in the short term.

Micro-lending involves giving the “poor” a little bit of money at the outset, which from our perspective (as rich Westerners) looks good because we can’t imagine a life without money.

We think the problem of the poor is that they don’t have enough money. On the contrary, their problem is lack of entitlement to the necessities of life. Money is only one way to obtain this entitlement, and it’s not a very good way in the long run, neither for the world’s “poor” nor ourselves.

The Trouble With Loans

A better way to secure entitlement to the necessities of life – in either the “developing” or “developed” worlds – is to increase local capacity for their direct creation; promoting local self-reliance. 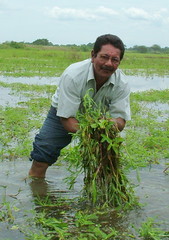 A loan, micro- or otherwise, has to be repaid. That means an enterprise started on a micro-loan must not only be solvent, but must produce a surplus and earn sufficient profit above the interest rate of the loan.

The possibility of earning a profit is largely beyond the control of the micro-loan recipient. It is subject to the fluctuations and instabilities of the global economy and the decisions of far-flung bureaucrats in governments and international financial institutions such as the IMF and World Bank: all complex forces well beyond the ken, let alone the control, of a Kenyan peasant woman selling bread from an urban sidewalk stand.

If we want to “help the poor,” the surest strategy is to work with them to increase their independence from the money economy. This is unfamiliar territory to nearly everyone in the West. Since we (most of us, comparatively speaking) have money, it is our stand-by solution to everything. “Throw money at the problem” is our strategy in research, public welfare programs, environmental issues and politics.

What we must do in order to be able to “help the poor” is to first learn ourselves how to live without money, or at least with a lot less of it. We must learn, or rather re-learn, the techniques of self-reliant, agrarian living wherein local needs are met primarily by goods produced locally.

I am not suggesting – God forbid – that everyone ought to “go be a farmer.” We need “urban agrarians” just as desperately as rural ones.

We must familiarize ourselves with our local ecosystems and devise solutions for living that make sense within our particular ecological and social contexts. And we must re-establish the health of community that makes locally self-reliant living feasible, as it cannot be done by the individualist “loners” under the influence of “modern” society and market culture.

When we consider that we must first help ourselves in these formidable tasks before helping the world’s poor, we reach the ineluctable conclusion that we are, at present, woefully unqualified for the task. Our standard answer to life’s problems – to spend more money – cannot produce the needed long-term solutions.

The last thing these communities need are more enticements into the money economy and the overly-consumptive modern urbanized lifestyles.

What seems ironic, though only from our own perspective, is that some of the “poorest” communities in the world are in a better position to help us than we them. Some subsistence farming communities of Asia, Africa and Latin America still practice a lifestyle that involves a high degree of local self-reliance, strong community bonds, ecological literacy, and a well-developed sense of place.

The last thing these communities need are more enticements into the money economy and the overly-consumptive and ultimately unsatisfying modern urbanized lifestyles. To the extent that micro-lending programs draw folks further into the money economy and market culture, they create financial dependence and advance the attendant breakdown of community and destruction of ecosystems.

So as far as micro-lending tourism is concerned, I would suggest instead that travelers seek first-hand experience and insight into self-sufficient community lifestyles.

Such agrarian projects are developing worldwide, and our participation as travelers helps both to advance the communities’ independence from the global economy and provides us with invaluable experiential learning possibilities that prepare us to help our own society break its addiction to globalization, growth and monetary dependence.

Are micro-loans good for people in the developing world? Join the discussion below!

Josh Kearns is a bona fide hill-billy who currently runs AqueousSolutions, an NGO devoted to developing and promoting self-reliant forms of water purification. He’s been a researcher in environmental chemistry and ecological economics and is into techniques for high quality self-reliant living like organic farming, natural building, permaculture and bluegrass music.
Tagged
Culture Activism
What did you think of this story?
Meh
Good
Awesome

Rajasthan’s epic camel festival is two days of fur-cutting, dancing, and races
30 awesome Japanese idioms we should start using in English
9 boardless, cardless games to play anywhere
Oast houses are the most astonishing buildings in all of England
21 amazing images of the new Seven Wonders of the World