IF YOU WALK LONG ENOUGH in the countryside of the British Isles, from time to time you’ll spot piles of stones along the common way.

Cairns serve as markers for various reasons, practical or commemorative. Some are brilliantly constructed, some very simple – and some are just a pile of stones.

For travelers, they’re invaluable as landmarks.

In many ways, quotations serve the same purpose. They can inspire and enlighten, help point out hazards or meaningful history. Depending on what you’re looking for, they can keep you on your path or suggest a new one. They’re landmarks for paths of thought.

Quotes are best considered as guides rather than rules. Sometimes quotes contradict one another, which suggests a greater truth – a range of choice, existing between the markers.

It’s wise to keep in mind Nicholas Chamfort’s observation that those who study quotes “are like those who eat cherries… first picking the best ones and winding up by eating everything.”

The (Next) 50 Most Inspiring Travel Quotes Of All Time 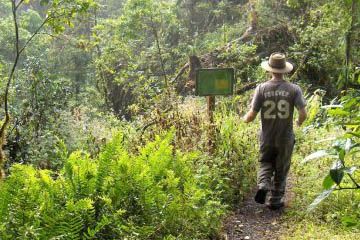 50. Kilometers are shorter than miles. Save gas, take your next trip in kilometers.” – George Carlin

49. “Every perfect traveler always creates the country where he travels.” – Nikos Kazantzakis

47. “It is a strange thing to come home. While yet on the journey, you cannot at all realize how strange it will be.” – Selma LagerlÃ¶f

46. “Remember that happiness is a way of travel – not a destination.” – Roy M. Goodman

44. “As the traveler who has once been from home is wiser than he who has never left his own doorstep, so a knowledge of one other culture should sharpen our ability to scrutinize more steadily, to appreciate more lovingly, our own.” – Margaret Mead

43. “Too often. . .I would hear men boast of the miles covered that day, rarely of what they had seen.” – Louis L’Amour

42. “Stop worrying about the potholes in the road and celebrate the journey.” – Fitzhugh Mullan

41. “One main factor in the upward trend of animal life has been the power of wandering.” – Alfred North Whitehead

40. “The open road is a beckoning, a strangeness, a place where a man can lose himself.” – William Least Heat Moon

39. “Travel only with thy equals or thy betters; if there are none, travel alone.” – The Dhammapada

38. “Our deeds still travel with us from afar, and what we have been makes us what we are.” – George Eliot

37. “Worth seeing, yes; but not worth going to see.” – Samuel Johnson, on the Giant’s Causeway

36. “An involuntary return to the point of departure is, without doubt, the most disturbing of all journeys.” – Iain Sinclair

35. “Traveling is like flirting with life. It’s like saying, ‘I would stay and love you, but I have to go; this is my station.'” – Lisa St. Aubin de Teran

34. “Once in a while it really hits people that they don’t have to experience the world in the way they have been told to.” – Alan Keightley

33. “Half the fun of the travel is the aesthetic of lostness.” – Ray Bradbury

31. “We wander for distraction, but we travel for fulfillment.” – Hilaire Belloc

29. “I should like to spend the whole of my life in traveling abroad, if I could anywhere borrow another life to spend afterwards at home.” – William Hazlitt

27. “A child on a farm sees a plane fly overhead and dreams of a faraway place. A traveler on the plane sees the farmhouse… and thinks of home.” – Carl Burns.

25. “One always begins to forgive a place as soon as it’s left behind.” – Charles Dickens

24. “When one realizes that his life is worthless he either commits suicide or travels.” – Edward Dahlberg

23. “Without new experiences, something inside of us sleeps. The sleeper must awaken.” – Frank Herbert

22. “Arriving at each new city, the traveler finds again a past of his that he did now know he had: the foreignness of what you no longer are or no longer possess lies in wait for you in foreign, unpossessed places.” – Italo Calvino

20. “A journey of a thousand miles begins with a cash advance.” – Bumper sticker

19. “Travel at its truest is thus an ironic experience, and the best travelers… seem to be those able to hold two or three inconsistent ideas in their minds at the same time, or able to regard themselves as at once serious persons and clowns.” – Paul Fussell

18. “Most of my treasured memories of travel are recollections of sitting.” – Robert Thomas Allen

17. “I am not the same having seen the moon shine on the other side of the world.” – Mary Anne Radmacher Hershey

16. “Only by going alone in silence, without baggage, can one truly get into the heart of the wilderness. All other travel is mere dust and hotels and baggage and chatter.” – John Muir

15. “When you’re traveling, ask the traveler for advice / not someone whose lameness keeps him in one place.” – Rumi

14. “There are only two emotions in a plane: boredom and terror.” – Orson Welles

13. “To be on a quest is nothing more or less than to become an asker of questions.” – Sam Keen

10. “When preparing to travel, lay out all your clothes and all your money. Then take half the clothes and twice the money.” – Susan Heller

9. “The autumn leaves are falling like rain / Although my neighbors are all barbarians / And you, you are a thousand miles away / There are always two cups at my table.” – T’ang dynasty poem

8. “It is not down in any map; true places never are.” – Herman Melville

6. “We are all travelers in the wilderness of this world, and the best we can find in our travels is an honest friend.” – Robert Louis Stevenson

5. “It’s a battered old suitcase and a hotel someplace and a wound that will never heal.” – Tom Waits

4. “The map is not the territory.” – Alfred Korzybski

3. “It is solved by walking.” – Algerian proverb

2. “He who would travel happily must travel light.” – Antoine de Saint Exupéry

1. “What am I doing here?” – Arthur Rimbaud, writing home from Ethiopia

Any quotes we missed this second time around? Share your picks in the comments!

7 picture-perfect Irish villages we want to escape to
12 places around the world that go all out with holiday lights
30 awesome Japanese idioms we should start using in English
20 of the funniest idioms for people learning English
9 boardless, cardless games to play anywhere