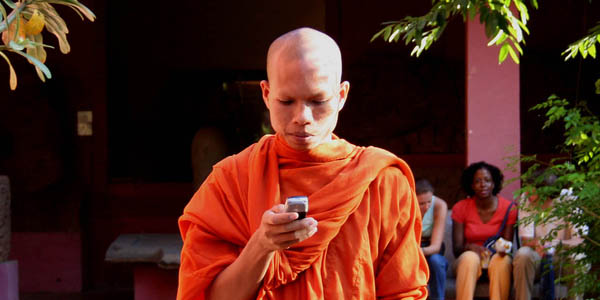 As words lose their potency in the West, places like war-traumatized Cambodia are still swayed by the power of the pen.

Celine Dion is huge here, and one morning my neighbor across the alley was blasting her from rattling speakers while washing his car in the white-blue of dawn. I happened to be up early and reading on my front porch a book of Joan Didion’s essays from the Sixties.

She referenced Hieronymus Bosch, the Dutch master of ghastly medieval humanity, twice in sixty pages, and this gave me a new lens through which to understand Khmer musical tastes.

My neighbor, like any Khmer over the age of thirty, almost certainly lived through the Boschian horrors of the Khmer Rouge, the terror that has made Cambodia what it is today.

As Celine gave way to the Carpenters singing every sha-la-la-la; every whoa-oh-oh-oh, I thought of how words, which many in the West fear are losing ground to the pulsing image, remain powerful enough in Cambodia to build a bridge to ruin.

And they’re frequently as banal as those Western nonsense syllables. 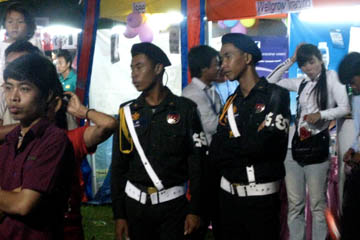 If you travel around Cambodia, you’ll pass many, many signs over schools, homes, the red-dirt roads, advertising for the Cambodian People’s Party. Every once in a while you’ll come across a similar ad for the opposing Sam Rainsy Party. These signs are inevitably battered by age, their lettering faded to outlines and the color of soured milk.

The SRP is the only party other than the CPP to have any significant representation in parliament, though its 26 seats are dwarfed by the CPP’s 90. Prime Minister Hun Sen and his CPP are waging a war on the SRP. They’ve marginalized it, now they’re going to eradicate it, la-di-da, the same old song and dance.

A few months ago the editor of a pro-SRP paper printed a speech by Rainsy in which he accused the CPP Foreign Minister of being a former Khmer Rouge cadre.

The editor, Dam Sith, was slapped with a two year prison sentence for the spreading of “disinformation” and “defamation.” A lawyer for two SRP Members of Parliament was given a prison sentence as well because he “made a mistake” in defending the MPs, who were also accused of insulting the CPP.

What makes these cases particularly interesting is their vocabulary.

On Sen’s demand, and as the only possibility of avoiding jail time, Editor Dam wrote a groveling apology. “I am asking for the highest permission of [the party] to forgive me,” he wrote. “I promise to discontinue the publication of my paper. I promise to support the ingenious CPP policy in the building of the country’s progress.”

Dam even joined the CPP because disowning one’s dissent, apparently, is not enough.

This stuff isn’t limited to political enemies. The head of the Khmer Civilization Foundation, an organization charged with protecting and promoting Cambodian culture, worried that the heat from a light show staged nightly in Angkor Wat might damage the temple.

He was slapped with a two-year jail sentence for “disinformation.” The sentence was rescinded when he wrote a formal apology.

When the World Wildlife Federation issued a report citing pollution in the Mekong as a major threat to endangered Irrawaddy river dolphins, the government decried the findings as “all lies” and threatened to kick the organization out of the country.

What interests me is the potency it grants to words in an era where many of us fear the loss of that potency.

Sitting on my porch while the neighbor boomed his music, songs that I find childish and goofy, I reflected: letters of apology hardly seems worthy of any tyrant worth his salt. An editor or lawyer notes offenses committed, is sentenced to jail, and then is freed, so long as he says sorry? It’s like keeping someone in a headlock and nuggy-ing his scalp until he calls himself gay.

And yet Hun is a seasoned despot; he would not insist on apologies and then let it go unless the security of his position obviated the need for the physical purges of his enemies and unless he had something real to gain by the public shaming of them.

The groveling of that editor, the way he was forced to use his own words to embarrass and attack himself, that was language turned to power. Hun could have let the prison sentences stand and doom his critics to a slow purgatory.

Instead, he chose to impose self-incrimination, to force his adversaries to denounce themselves and then claim the denouncing as honorable. The technique is a classic, but what interests me is the potency it grants to words in an era where many of us fear the loss of that potency.

Words like apologize and sorry so often feel benign.

How many times have you used or experienced I’m sorry as a verbal place holder in a fight, a meaningless errrrgh that allows you to catch breath before battling on? 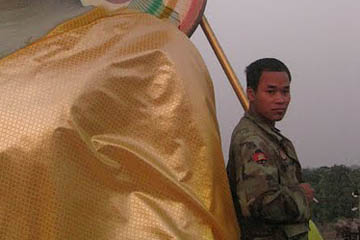 The average American takes it for granted that the words publicly uttered by our leaders are just wisps of cloud; we have steadily divested our vocabulary of meaning. But in Cambodia, words like “corruption” and Khmer Rouge cadre are still potent enough to require official distortion and abuse, and rely on the degradation of words like “honor” and “generosity.”

And that brings me back to Hieronymus Bosch and my Celine Dion-loving neighbor. He surely knows that the Foreign Minister and Hun Sen were both Khmer Rouge. This is something everyone knows.

But there is no ripping out of toenails, no systematic rape, no skewering of babies on bayonets these days. Making a newspaper editor beg for forgiveness is not the same as taking him into the jungle and beating his head in, right?

So in the world of relative experience, living under a tyrant is not so bad, eating one’s own words not so abusive. This is the post-Boschian Cambodia, the post-Khmer Rouge world. Things are more civilized than that now.

And that, I suppose, is worth celebrating with the comfort of a soft rock cheese-puff.

What do you think of the political power of words? Share your thoughts in the comments!