14:06 Apr 22, 2020
Top Countries
Top CitiesView All Destinations
Trending Countries
Trending Cities
Load More
Some believe Western religions demonized sex, while others think ancient cultures might not have been that different than our own.

Here’s a little video making its way around the internet that proves once again, we are a much more sexually inhibited society than our predecessors:

If you are having trouble viewing the video, it can be found at Reuters.

The museum’s director notes that on rooftops of houses and public paintings at the time – 700 BC to 400 AD – these types of sexual scenes were displayed for all to see, including “children, adolescents, men, women, everybody.”

Reuter’s reporter Paul Chapman adds that these ancient cultures viewed “nature, ideas, and actions all in balance.” Or is that just what we’d like to believe?

Over at the Huffington Post, most commenters agree that this video is “not news” if you know anything about ancient Greek and Roman cultures, or have stepped foot in Europe. They’ve got these naughty artifacts hanging around everywhere.

But some interesting thoughts were brought up around the rise of Christianity, Judaism, and Islam, whose belief systems are arguably the reason for turning the clock back on accepting open sexual behavior. As futate01 notes:

Sexuality became evil when Semitic religions spread around the world. Before Judaism, Christianity, and Islam most world cultures had healthy attitudes about sex. It was viewed as a method of the creation of life and a gift from God to be honored and appreciated.

Insidious takes it further, saying, “Prudish is too nice of a word to describe the “demonization” of female sexuality from Judaism, Christianity, and Islam.” HystericHistoria adds, “Not only female sexuality, but all sexuality. Yes, generally men in Western culture…have been…all­owed more freedom than women since the inception of the Judo-Christian religions began, but even then it is nowhere near as ‘free’ as what the ancients experienced. Homosexuality, for instance.”

I agree with you…but it’s not just Western culture…­in our global world, controlling female sexuality has been tantamount in oppressing all female behavior: From wearing the Burqa or highheels to Female Genital Mutilation to pornography as the new “erotica”. I think that the war against male homosexuality is an extension of the control over anything not “male” and is a form of misogyny. Just like there is no gray area for women’s sexuality, there can be no gray area for male sexuality.­..this is the case that Judaism, Christianity, and Islam purport.

Not the Whole Story 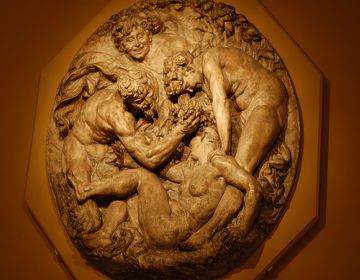 In other words, we can’t use these symbols to classify cultures that pre-date Christianity, Judaism, or Islam as completely open sexual societies (who didn’t oppress people) in the same way that strip clubs and bathhouses fail to prove that “deviant” sexual behavior is accepted in ours.

If people thousands of years from now can only get their hands on some copies of Hustler and a vibrating contraption, will they assume our society had extremely open views about sex?

Javida adds, “Normally, most faiths encourage the sharing of sexuality between married people. That is, not acting promiscuously or adulterously. But keeping sex inside marriage does not detract from it’s expression” (ahem, that is if you are allowed to be married, or not forced to be married, of course).

No matter what side you fall on, gotta love a guy with a very proper British accent saying, “the Greeks were always game and the Romans were permanently raunchy.”

Do you think current Western religions demonized sex, or are we just rewriting history? Share your thoughts below.